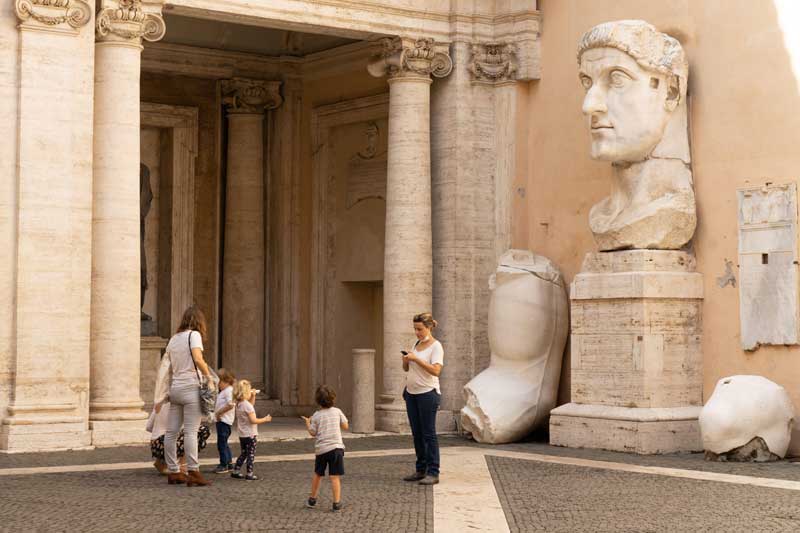 The Colossus of Constantine by Mary Elizabeth Podles

The Colossus of Constantine

A lot can happen to a work of art in 1,700 years. Consider the Colossus of Constantine: what remains of it today are a colossal marble head, standing over seven feet tall; a right arm and, oddly, two right hands; a left kneecap and shin; and both feet, complete with callused toes and sandals, a soldier's feet. Such a curious collection of fragments raises many of the kinds of questions art historians must ask themselves. What did this look like originally, before it fell prey to Time the destroyer and other varieties of vandals? Why did it look that way? And what was it meant to convey in its own time?

Let us begin by piecing together what we know of its history, and work deductively from there. The size of the head suggests that the figure of Constantine, even if seated, would have measured over forty feet high. (For comparison, the seated Lincoln in his monument in Washington is nineteen feet high, less than half the size of Constantine.) A solid marble statue of that size would defy even modern-day moving equipment, so it must have been an acrolith, a statue with sculpted marble parts attached to a framework of wood or brick, covered with clothing or drapery cast in metal. If the marble pieces were reassembled on such a framework, they would likely show that Constantine had himself portrayed in the same pose as the Capitoline Jupiter Optimus Maximus, the most important sculpture in ancient Rome.

The Constantine fragments were found near the ruins of the Basilica of Maxentius and moved to the Capitoline Hill in Rome in 1486 by no less a personage than Michelangelo. Later they were moved to the courtyard of the Capitoline Museum, where they remain today (more fragments were discovered in 1951). But originally the Colossus was meant to be housed in the apse of the Basilica of Maxentius, an ambitious architectural project planned and begun by Constantine's fellow tetrarch, Maxentius.