An Architectural Sign of Mere Christianity
by Michael Ward

Hillsdale College, Michigan, was founded in 1844 by Freewill Baptists. Today, its denominational link with Baptists is no longer particularly evident, but unlike many institutions of higher learning that were Christian at their foundation and are now effectively secular, Hillsdale College is still robustly committed to the faith.

This commitment has recently been demonstrated by the construction of a new chapel at the heart of the college campus, named Christ Chapel and costing nearly $30 million. It is quite extraordinary, both as a piece of architecture and as a contemporary statement about the essential role of faith in the life of learning.

In the course of the fundraising effort for the chapel, the president of Hillsdale, Dr. Larry Arnn, remarked, "There has never been a great university that was not heavily concerned with the question of God. There has never been serious Christian practice that was not heavily concerned with learning. Christ Chapel will be a daily reminder of this central fact."

I had the honor of delivering a convocation address at Hillsdale on the day of the ground-breaking ceremony for the chapel back in April 2017, and then again at the first convocation in the completed building in October 2019. As someone familiar with the importance of institutional religion from my work as a college chaplain at both Oxford and Cambridge, and as someone interested in the ramifications of C. S. Lewis's concept of "mere Christianity," I have paid close attention to the progress of Christ Chapel.

It was designed by Duncan Stroik, professor of architecture at the University of Notre Dame, who is surely the most theologically literate architect working today. Stroik is best known for his Catholic churches and chapels, most notably at Thomas Aquinas College in California and at the National Shrine of Our Lady of Guadalupe in Wisconsin. These buildings are large, beautiful, classical, and unmistakably Catholic. At Hillsdale, he has operated on a similarly grand scale, but in a more interdenominational key.

Christ Chapel can seat nearly fourteen hundred people and is the largest classical chapel built in the United States in seventy years. It owes its architectural lineage to two Anglican buildings, namely Christ Church, Philadelphia, where the Founding Fathers worshiped during the Continental Congress, and St Martin-in-the-Fields, Trafalgar Square, London, built in 1721. 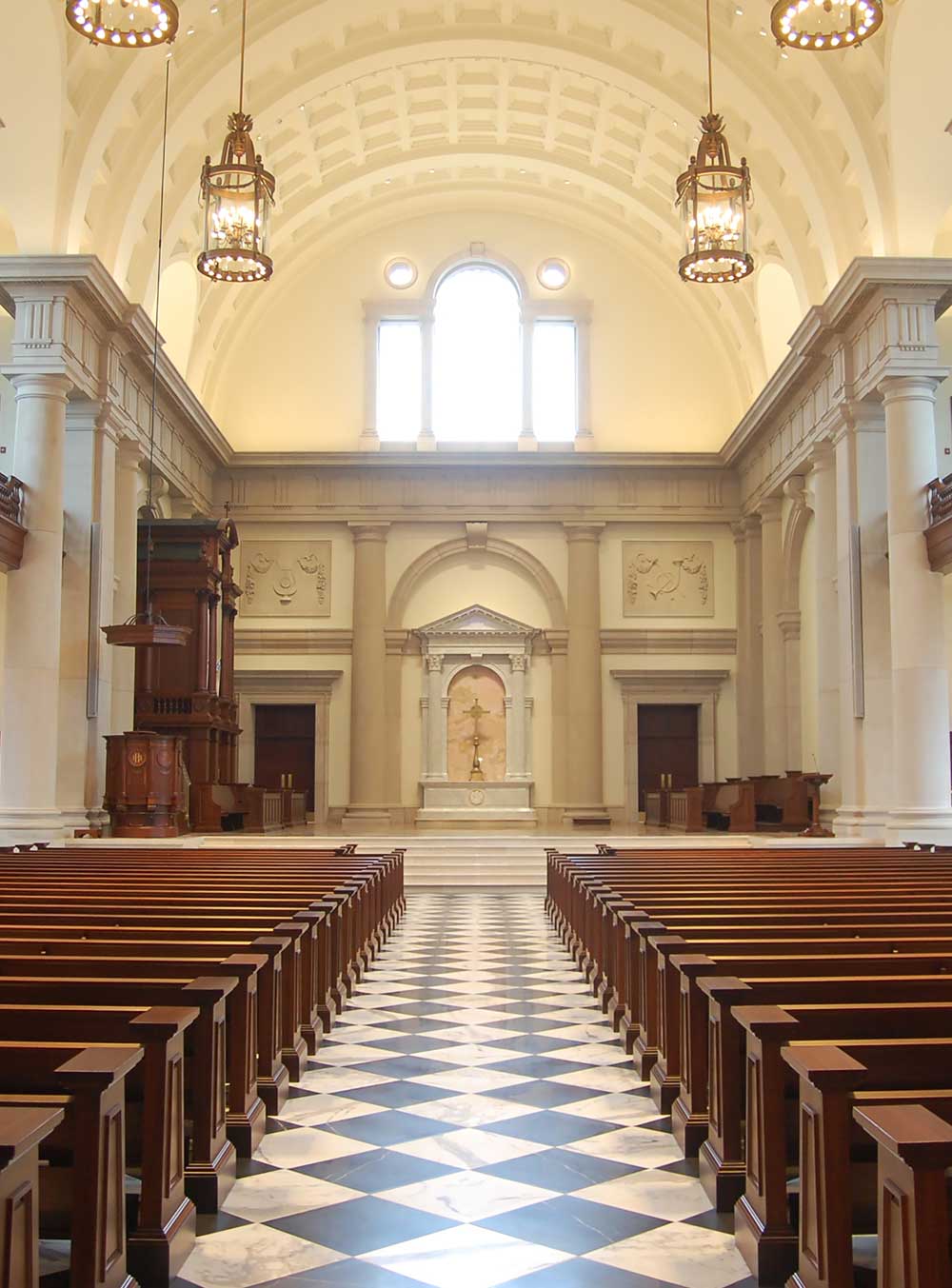 That Christ Chapel should have been designed by a Catholic but in a mostly Anglican or Protestant register indicates something of the ecumenical spirit that Hillsdale aims to foster. President Arnn sees the building as a "mere Christian" kind of space, a place where the different spiritual traditions present among the student body (and indeed among the faculty) can all feel welcome, where commonalities can be celebrated and Balkanization avoided.

As is customary in Protestant churches, the visual focus of the interior is a cross (this one bronze and free-standing). That it is not a crucifix might disappoint Catholics and Orthodox, but their religious sensibilities are accommodated in the fact that this cross stands atop a marble altar bearing on its forward face a circular relief of that Eucharistic symbol, the pelican plucking its breast.

There is no stained-glass in the main body of the building. However, those in search of color and icon-ography need only step into a small side chapel, where Christ's baptism and St. Michael defeating the devil are depicted in the windows.

There is no statuary, let alone anything Marian. However, there is some Latin: the three main doors giving entry to the narthex are superscribed with "Fides," "Spes," and "Caritas."

In these and other ways the design of the chapel adroitly navigates some of the scandalous divisions among Christians. Protestants would, I think, feel most at home in the space, which is appropriate, given that they constitute the majority of the student body and that the chaplain, the Reverend Adam Rick, is an Anglican. However, non-Protestants would not feel that their own traditions or expectations had been completely disregarded, and since Catholics account for about thirty percent of the college personnel, this, again, is appropriate. The first Mass celebrated in the chapel was held on the feast day of Pope St. John Paul II, a few weeks after the official dedication had taken place.

At that dedication ceremony, the guest of honor was Supreme Court Justice Clarence Thomas, who noted in his address how, "in this age of popular iconoclasm, building a chapel on a college campus is all but verboten." Hillsdale's decision to erect such a building was a bold declaration, he said, "that faith and reason are mutually reinforcing." Justice Thomas went on to say:

Beginning in the early 1900s, many elite colleges and private universities began to face questions about the continuing relevance of religious instruction on campus. These questions would have surprised the founders of these schools, many of which were created in part for the express purpose of providing religious instruction. But as time went on and schools moved away from their religious roots, the relevance of religion to higher education was increasingly questioned and campus chapels, in particular, came to be seen as relics of a bygone era.

With the completion of Christ Chapel, Hillsdale College has staked out its position in this debate, and its decision serves as an example for all of us. The construction of so grand a chapel in 2019 does not happen by accident or as an afterthought. Christ Chapel reflects the college's conviction that a vibrant intellectual environment and a strong, democratic society are fostered, not hindered, by a recognition of the divine. Hillsdale College affirms with the writer of Proverbs that 'the fear of the Lord is the beginning of wisdom, and the knowledge of the Holy One is insight.' By constructing this chapel, the college upholds the continued importance of its Christian roots even as it respects the rights of each person to worship God according to the dictates of his own conscience.

Our country was founded on the view that a correct understanding of God and the human person is critical to preserving the liberty that we so enjoy. John Adams wrote, "Our Constitution was made only for moral and religious people. It is wholly inadequate to the government of any other." He recognized that the preservation of liberty is not guaranteed. . . . Faith in God, more than anything else, fuels the strength of character and self-discipline necessary to ably discharge that responsibility.

That is why I am so encouraged by the construction of Christ Chapel. . . . Hillsdale College was founded on the understanding that the battle to preserve and promote freedom in our country will be waged in the hearts and minds of the people. Rather than shrinking from the battle, Hillsdale is rising to the occasion by investing in the intellectual and spiritual development of its students so they can provide God-honoring leadership to our country. . . .

Let this chapel be more than an impressive building. Let it be a place where people enter the presence of a majestic God. Let it be a house of prayer, of worship, of meditation, and of celebration before God. Let it be a haven of rest for the weary, a place of healing for the wounded, a place of comfort for the grieving, and a source of hope for the despairing and forgotten. Let it point to a day when the dwelling of God will be with men, when God himself will wipe away every tear and mend every wound. Let it be a place where tomorrow's leaders will discern their callings and grow firm in their convictions. Let it stand as a bold declaration to a watching world that faith and learning are rightly understood as complements and that both are essential to the preservation of the blessings of liberty.

Above all, let this chapel equip and inspire us to honor God in whatever he calls us to do, for, as St. Paul wrote in the Letter to the Romans, "From him, and through him, and to him are all things. To him be the glory for ever. Amen."