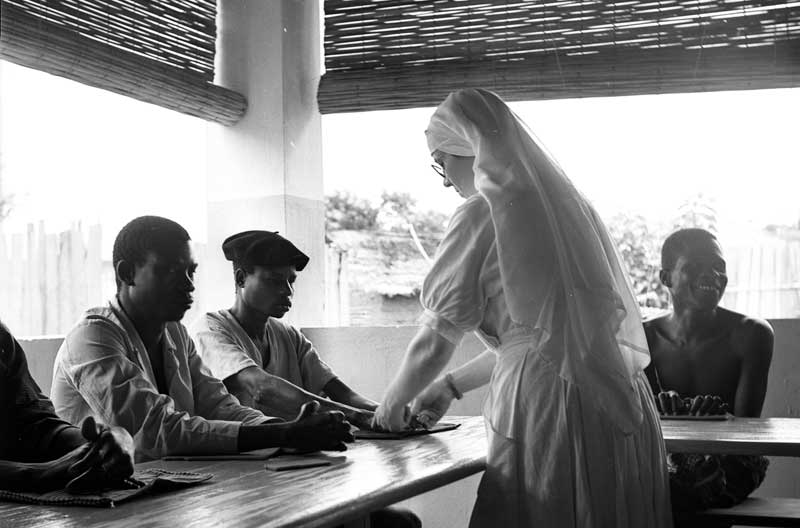 On the Real Division in Play

One of the missionaries of the church I grew up in was a medical doctor practicing in an impoverished African country. Those who came to his clinic for treatment were also given the gospel. While he did not emphasize it in his reports to the anti-Catholic congregation, he made no bones about the fact that while in the field he would meet regularly with a group of nuns from a nearby convent to pray—thus acknowledging not only their Christianity, but also the possibility of an active, vital fellowship with them.

He was a canny man who knew his M.D. made him a member of the closest thing America has to nobility, which distinction carried exemptions from prosecutions that commoners would have to face for such departures, at least in our denomination. Because he was a missionary who could have been rich and influential in the United States—when on furlough Dr. Slater was in demand as a professor of surgery—his African work had a visible price tag on it in excess of $100,000 per annum that people could understand.

He hated the song, "So send I you to labor unrewarded," which was standard fare at every missions conference, and made no bones about that, either. He told us numerous times that the idea he was unrewarded for his work was the sheerest un-Christian stupidity, and explained why. Nobody, as far as I know, disagreed, but people's tastes regularly overwhelm their logic. Dr. Slater was a physician and could function pretty far outside the box, but we liked the song and a soloist always sang it anyway when he wasn't at the conference. Everybody wants his saints and is willing to go a long way in making them.

I was reminded of his irregularities by the testimony of Silvester Krčméry (kirsh-MERRY) recorded by Rod Dreher in Live Not by Lies (p. 155):

"In [the Soviet] prison, nobody recognized any confessional differences," writes Krčméry. . . . This same principle echoes in the testimony of the Lutheran pastor Richard Wurmbrand and other former captives of the communists. It is not a false ecumenism that claims all religions are essentially the same. It is rather a mutual recognition that within the context of persecution, embracing Jan Patočka's "solidarity of the shattered" becomes vital to spiritual survival.

Readers of Touchstone have heard this voice before—that while recognizing and disagreeing on confessional differences is important, not least because under present conditions we must continually cultivate both the willingness and the ability to distinguish right from wrong in matters of religion as in everything else—in the end, as in the beginning, there remains only the difference between those who believe and trust in God and those who do not, a truth taught in Scripture that the demons know and use as an operating principle. There is much evidence, especially among the persecuted, that Satan does not bother with the differences between Protestants, Catholics, and Orthodox, and even believers who have not yet come to Christ, except in the attempt to divide them from one another and weaken their union, to "shatter their solidarity."

Reference to the "context of persecution" of believers is in fact reference to the border between the historical present and the historical End, and thus is of an eschatological character. Those persecuted for their resistance to the Great Lie are at the portal of eternity and have entered the hall of judgment on their souls and the truth of the religion they profess, the cleansing fire that the Catholics call Purgatory, but that all Christians recognize apart from that particular construction.

So Far, So Good

Touchstone began more than thirty years ago on the premise of "ecumenical orthodoxy" or "mere Christianity"—not as something new but as the recipient of a mind already present and active in the Church. In these days, when the most acute and catholic minds are turning more and more toward thinking in eschatological terms about what is happening in the churches and society, speaking of the spirit of Antichrist and the end of the world, it seems to have begun on the right track, and is doing the right thing by staying on it unapologetically.

As odd as it may seem, this writer takes comfort from the "pessimism" about the near future (but not the Far One) with which we must increasingly deal, for I have been bedeviled from the journal's beginnings with the question about just how Touchstone will perish, as such projects inevitably do. Will there be a falling out among the editors? A "takeover" by one of the traditions represented? Apostasy in which we weaken and fall to the spirit of the age?

Each of these processes, once in course, seems to involve laws of human behavior and institutional death that are nearly inexorable. But now there is in view the blessed chance that we may end not by being penetrated and compromised by religious odium or the spirit of the age, but by a form of martyrdom: the death died by faithful witnesses to the Word of God in the "context of persecution"—by those who, when threatened by the devil and his minions for refusing to participate in the Lie, are shut down because they just won't shut up.

more on ecumenism from the online archives