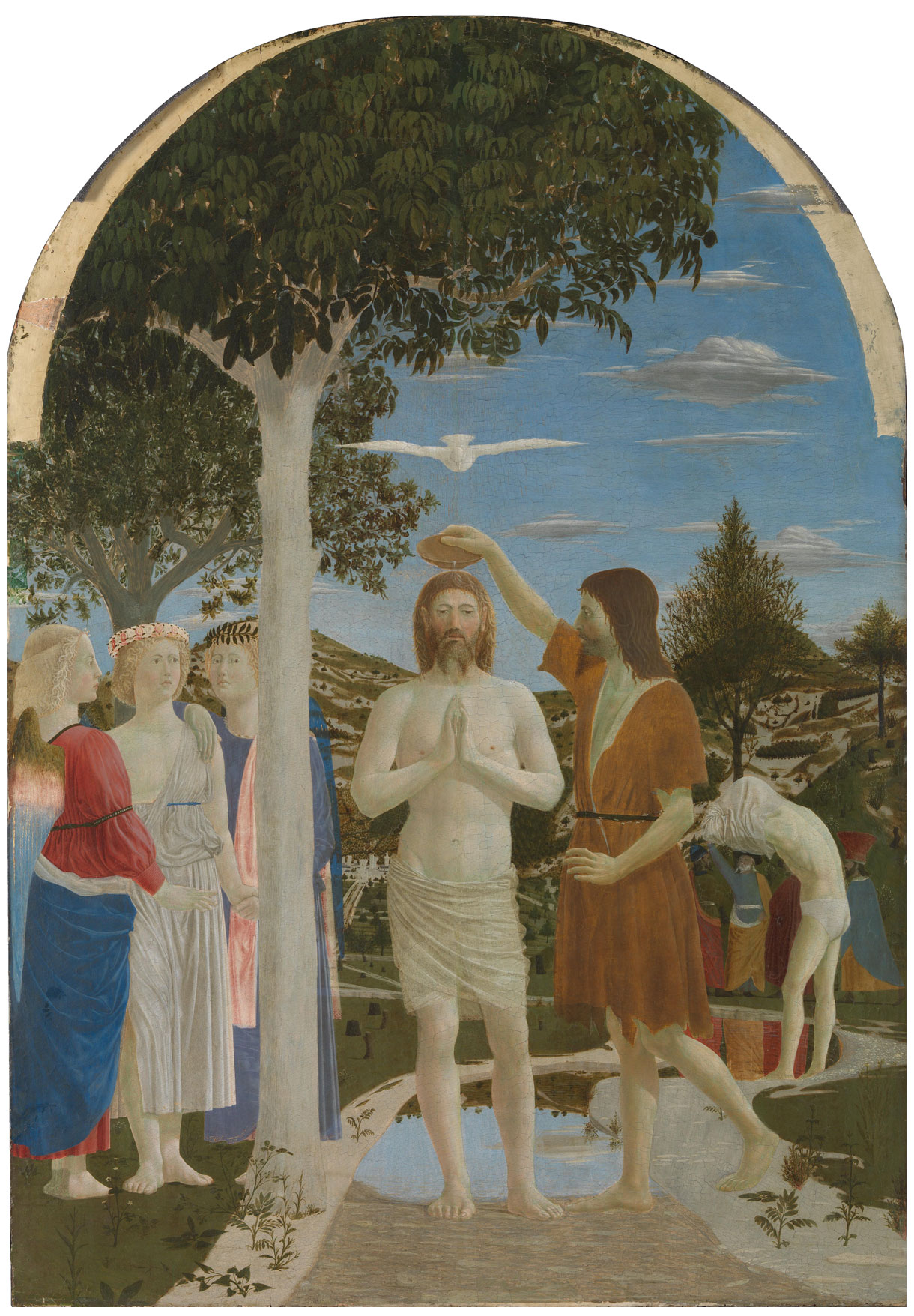 At the Council of Florence in 1439, it seemed for a fleeting moment as if the Great Schism between the Eastern and Western branches of the Church might have been resolved. In 1417, the papal household had set itself in order, replacing three rival claimants with a single compromise candidate. Meanwhile, in the East, Byzantium was under siege by the Turks, and, desperate for help from the West, seemed ready, too, to make compromises. It was a moment of great hope, and, when representatives of both branches came together, a time of unparalleled pomp and pageantry. The city of Florence poured money into banners, parades, and temporary decorations, while the Byzantines, with their exotic beards, Eastern garments, and indescribable hats, were to Western eyes a visual feast in themselves. Presumably, too, they brought with them icons, which fed into the rich ferment that was early Renaissance art. Ultimately, the union was unsuccessful, but the council left its stamp on Italy, and especially on the youthful Piero della Francesca and his Baptism of Christ.

Piero was the son of a prosperous merchant, Benedetto de' Franceschi, who had close ties to the Camaldolese Benedictines of Borgo Sansepolcro; in fact, one of his other sons became a Camaldolese monk. One or the other may have been influential in procuring the commission for Piero of the altarpiece for the chapel of St. John the Baptist. Work was begun in 1438.

Recent technical analysis has revealed the progress of the painting. Piero prepared a poplar panel (45 x 66 inches) that consisted of a semicircle over a square; even in his early career he was drawn to a geometry of pure forms. Once the panel was ready, it was coated with a cool-toned ground layer, and the landscape was painted in. From the foreground plane, the fictive space recedes into a bowl-shaped valley, in which is tucked the town of Borgo Sansepolcro, recognizable by its towers.

It was not unusual to reset a biblical scene in a modern landscape, but this particular town carries extra weight: Sansepolcro, unlike many Tuscan towns, lay not on ancient foundations but had been built in the eleventh century by pilgrims from the Holy Land, who brought relics of the Holy Sepulcher to found a new Jerusalem. The river in the valley is the headwaters of the Tiber, so that the Jordan of the Old Jerusalem is replaced by the river that leads to the Rome of the New Dispensation.

It is probably at this point that Piero went to Florence, a move that seems to have affected his conception of the Baptism. There he would doubtless have encountered Byzantine panels of the Twelve Major Feasts, inspiring him to treat his panel as a festival piece, a rendering not just of the biblical narrative but also of its implications within the liturgy, so that the Baptism of Christ becomes instead the Feast of the Baptism of the Lord, with several component parts.

At the center is, of course, the Baptism itself, in the middle of the square section of the panel, which represents the earthly realm, as opposed to the heavenly space of the semicircle above. Where they meet, the figure of the dove brings the heavenly to earth. A vertical axis descends through the dove's head, through John's hand and the water, and on through the figure of Christ. Christ is posed like a Classical statue, with his weight on one foot and his hips and shoulders slightly tilted as if he were about to move, a dynamic pose called contrapposto, "counterpoised." A line drawn along his center of balance, from the tip of his chin to the instep of his weight-bearing foot, falls directly on this vertical axis.

Further, a line drawn horizontally through the wings of the dove, and then connected to this same point on the instep creates a perfect equilateral triangle, a symbol of the Trinity. For this is the first manifestation of the Trinity to Israel, the Theophany. Originally, golden rays descended from above as the voice of the Father, but alas, time and attrition have licked them away.

Notice that the river seems to swerve away from Christ's foot: according to medieval legend, the Jordan receded from Christ just as it did from Joshua and the Ark of the Covenant, for Christ is the New Covenant. At his feet grow several plants, all botanically correct and all with healing properties: buttercup, licorice, and plantain. Not only is this Christ's Baptism and the Theophany, it is also Baptism itself, given to us for healing. Behind John, a catechumen struggles, either to cast off his old self or to put on the white garment of the new.

Behind the catechumen stands a group of four men, exotically bearded, garbed, and hatted, no doubt very like those Byzantines Piero encountered in Florence. They are more than just exotics, though; Piero peoples his paintings from this time onward with Byzantines when he wants to portray events in the Holy Land not of the ancient past, but of the Christian era.

So, who might these four be? January 6th is also the Feast of the Epiphany, the manifestation of the Godhead to the Gentiles. In the West, tradition had crystallized the wise men from the East into a group of three, but Piero could have encountered icons in which the Wise Men are conflated with the four kings of Psalm 72, called up in the Epiphany liturgy: "May the kings of Tarshish, and of the Isles, render him tribute; May the kings of Sheba and Seba bring gifts!"

There still remains a fourth group of figures, the angelic trio at the left. Traditionally, angels took part in the Baptism, as adoring spectators or as participants who held the Lord's clothes lest they touch the ground. These ones, however, are rather detached. They link hands and touch shoulders in poses normally associated, in the nearly lost language of gestures, with matrimony and marriage bonds. Also, they wear wreaths made of pearls, flowers, and myrtle, all traditional marriage crowns.

There was a third feast celebrated on January 6th, that of the Marriage Feast at Cana, where Christ performed his first public miracle. But how are there three angels, if this is a marriage symbol? It is, but it is also another Trinity, and foreshadows the Wedding Feast of the Lamb, where Christ, the Lamb, eternally weds the Church, the blessed communion of all faithful people brought to him by Baptism, the ultimate Theophany at the end of time.