The Year of Our Lord 1943: Christian Humanism in an Age of Crisis
by Alan Jacobs

In January 2004, as the guerilla insurgency began to engulf the fragile peace achieved following the early stages of the Iraq War, a group of Christian figures, including Catholic journalist and papal biographer George Weigel, Harvard law professor Mary Ann Glendon, and Fr. Richard John Neuhaus, editor-in-chief of First Things, met with President George W. Bush in the Oval Office. A famous photograph of the meeting shows a relaxed Commander-in-Chief speaking affectionately with "Fr. Richard" as Weigel and Glendon look on in attentive seriousness.

In many ways, that meeting symbolized the apogee of political power these thinkers—often called "neocons" or "theocons" by friend and foe alike—would achieve. That same month, President Bush would advocate for a constitutional amendment upholding marriage. Later that spring, he would sign into law the Unborn Victims of Violence Act. And the following January, in his second inaugural address, he would make clear that even the Iraq War itself was being waged on behalf of human liberty, which, the theocons would frequently remind their readers, was in keeping with their vision of Christian humanism.

This Christian humanism has a deep and often confusing history, both in the United States and in the West as a whole. In the U.S., it was forged on the streets of Selma, where then-Lutheran pastor Richard John Neuhaus joined the marchers for blacks' civil rights in the 1960s, as well as at the Vietnam War protests, in which Neuhaus also participated, along with fellow theocon Michael Novak. It was envisaged as a "New Religious Right" in the pages of Neuhaus's 1984 Naked Public Square and in Weigel's 1999 biography of Pope John Paul II, Witness to Hope.

The theocons' Christian humanism presented itself as faithfully orthodox in its theology but also as willing to make accommodations for the liberal philosophy produced by the late Enlightenment. It advocated for what Michael Novak called Democratic Capitalism, a vision of free-market economics paired with Christian personalism. While taking a hard line against radical Islam, it nonetheless was dedicated to alleviating the longstanding and deep divisions between Christianity and other religions. Finally, it sought to revive Western haute culture through renewed interest in classical education and the Great Books, and in this way to combat the leveling effects of cultural Marxism on American education. For nearly three decades, this movement dominated much American and European—especially British—thinking about Christianity and culture. 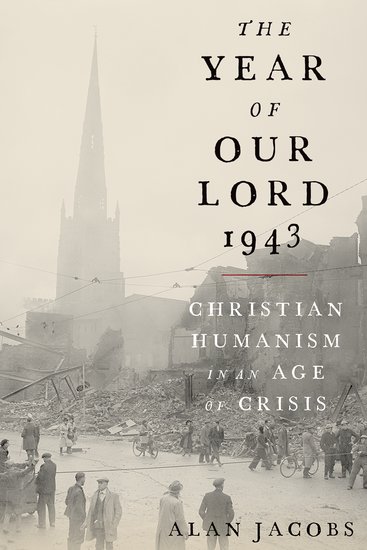 Neuhaus et al. did not emerge from a vacuum, however, but followed upon an earlier generation of Christian humanists, one that helped craft a new vision for the emerging liberal world order following World War II. In The Year of Our Lord 1943: Christian Humanism in an Age of Crisis, Baylor University's Alan Jacobs provides what is unquestionably the most thorough exposition of the complexity of thought of this generation by focusing on five of its leading lights—W. H. Auden, T. S. Eliot, C. S. Lewis, Jacques Maritain, and Simone Weil—while also giving attention to other influential figures, such as Reinhold Niebuhr and Jacques Ellul.

While many contemporary conservative Christians view contemporary conservative Christianity as continuing in an unbroken line from the way the pre-modern and early modern Church related to the culture, one of Jacobs's central theses is that, for many twentieth-century thinkers, the Second World War catalyzed a reboot of Christianity in this respect. Just as the war was for many German people a Stunde Null or "zero hour" in which German history was reset and a new era or Nachkriegszeit was born, so too, Jacobs argues, was it a watershed for Christianity, which would have to recalibrate itself to deal with the liberal technocratic world order expected to dominate the post-war years.

For Jacobs, the recalibration of Christianity to Christian humanism parallels the political recalibration that occurred at the Casablanca Conference on January 14, 1943, when Franklin D. Roosevelt and Winston Churchill, recognizing that the tide of the war had turned in their favor, sought to plan a new global vision. In tandem with the Casablanca Conference, John Foster Dulles (whose brother Allen would help found the Central Intelligence Agency), along with Lutheran theologian Reinhold Niebuhr, published a series of articles in Christianity and Crisis titled "Six Pillars of Peace," to serve as a blueprint for a new world order that would provide peace and stability.

The Dulles-Niebuhr effort was serendipitously matched by a series of lectures, articles, books, and even poems by a number of French, British, and American writers who advocated a renewal of Christian culture through a renewal of Christian education. These works included Jacques Maritain's lecture, "Education at the Crossroads," given the very day of the Casablanca Conference, as well as C. S. Lewis's The Abolition of Man, drawn from a series of lectures given that year, and Simone Weil's The Need for Roots.

This new Christian humanism harbored a complicated and qualified sympathy for medievalism and even for some twentieth-century reactiontary movements (a controversy Jacobs largely avoids treating) as exemplified in the thought and work of figures like T. S. Eliot and the younger Maritain. Nevertheless, it was unquestionably supportive of Christian democracy. Indeed, Maritain's Christianity and Democracy (1942), along with his most famous and influential work, Integral Humanism, written six years earlier, upheld not simply Western democracy but American democracy in particular as a flowering of Christian thought. In this respect, Maritain's middle and later works strongly contrast with his earlier embrace of the reactionary organization Action Française. They also arguably reflect a sea change in Catholic thought generally, which had advocated an aristocratic and monarchial society.

This new Christian humanism, had also, of course, to be humanistic, and therein lay the rub. As Jacobs illustrates, Simone Weil seemed to fear the power and pathos, or "force," as she termed it, of such works as Homer's Iliad, in which violence, aggression, and dominance seem to be glorified—though not without strong authorial criticism. She also feared what she called "spiritual totalitarianism," which, rightly or wrongly, she found in the works of her fellow Christian humanists such as Maritain.

This has been the core quandary of Christian humanistic education: it desires to present the classics of Western civilization while simultaneously taming them and removing or ignoring the elements of Christian triumphalism and the frequent brutality of pre-modern warrior cultures. As Jacobs demonstrates, many of the Christian humanists saw this struggle for freedom and humanity against the harsh and totalitarian forces of reaction being played out in World War II itself, where the forces of freedom were anomalously paired with the forces of Soviet communism in fighting the fascism of Germany and Italy, itself a caricature of the West's own reactionary past.

Jacobs notes that the Christian humanists thought it necessary for the new Christian humanist democracy to be cultured. T. S. Eliot, though a self-identified monarchist, agreed. He argued in The Idea of a Christian Society (1938) and Notes Toward the Definition of Culture (1943, 1948) for the central role of the poet in crafting not only the tenor of a people's language, but the cultural life of a nation. He attempted, with varying degrees of success, to accomplish this for a reluctantly Christian Britain with his Choruses from the Rock and the more mystical Four Quartets.

One thing Jacobs finds particularly noteworthy in the writers he examines—and which was lacking in the era of the theocons—is their critical attitude toward the liberal order itself. He ends The Year of Our Lord with an anecdote describing W. H. Auden's reaction to a meeting with Bryant Conant, the pragmatic and futurist president of Harvard University, whose vision of "function over form" would come to dominate so much of American education after World War II. Auden told his friend Alan Ansen that after meeting Conant, he realized that the greatest threat to Christian humanism would come from the nefarious forces working within the liberal West itself: "'This is the real enemy,' I thought to myself. And I'm sure he had the same impression about me."

Perhaps wisely, Jacobs avoids treating contemporary manifestations of the culture wars, which, in our post-millennial era, have resulted in the eclipse of Christian humanism. After reaching its political and intellectual apex in the early twenty-first century, when Evangelicals, Catholics, and conservative Jews were allied together in a two-front fight against Marxism and against reactionary thought manifesting itself in radical Islam and in the ghosts of the Christian West's own past, Christian humanism as a viable political and cultural force now seems to be spent. Some Christians, such as Rod Dreher, have suggested a regrouping of Christendom into small-scale, intentional communities from which a renewed Christian civilization might be rebuilt. Others, such as former White House strategist Steve Bannon, have sought for a reclamation of political power by Christians through the nascent populist movements that are emerging throughout the ruins of Christendom.

But perhaps what is most needed at this juncture, as it is in every age, is a return to personal holiness. Combined with a re-grounding of Christianity in intentional communities, a strong push for legitimacy in the public sphere, and, most importantly, a firm faith in our Lord Jesus Christ, this may provide for a future in which, in the words of Julian of Norwich via Eliot's Four Quartets, "All shall be well, and all manner of things shall be well."

Jesse Russell is Assistant Professor of English at Georgia Southwestern State University. He has published on literary theory, semiotics, and politics, and is at work on a book that explores Neo-Platonic magic in the work of Edmund Spenser. He is a Roman Catholic.