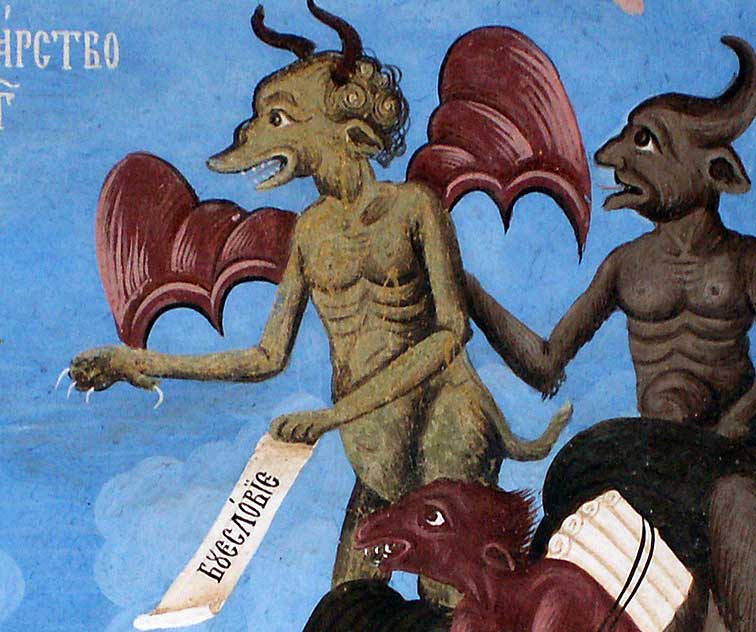 Deliver Us from Evil by Anthony Esolen

Deliver Us from Evil

Justice Demands an Assessment of Injustice

Fiat justitia, ruat caelum: Let there be justice, and let the heavens fall.

"In the course of justice," Shakespeare reminds us, "none of us should see salvation." True enough. "As you from crimes would pardoned be," says Prospero in his final words, "Let your indulgence set me free." Good for persons. Good for persons, not necessarily for nations.

When Martin Luther King, Jr., wrote his famous letter from Birmingham Jail to his fellow Christian pastors, he appealed to their faith, their reason, and the angels of their better nature. He desired that the United States finally live up to the promise of her belief in the equality of all persons before the law, and their equality in dignity as conferred upon them by their Creator. He was appealing to a good nation that had permitted great evil.

At this point in the moral decline of our nation, are we any longer in King's position? Can we appeal to a good nation marred by evil deeds? While the nation includes many citizens seeking justice and doing good, in its legislation and court rulings, we discern what can only be called great evil deliberately committed by the state. Our nation's evil still may be masked at times by good deeds and by the residue of what the nation once was and is no longer.

This is a dreadful judgment to make. It is compelling, however, if we acknowledge, alas, that a Reverend King today could not appeal to faith, reason, or even our better nature. Faith subsists now under sufferance; reason is traduced as a tool fashioned by those in power to keep them so; nature is denied or despised or violated at every pass; and as for "better," the judgment it implies falls under the egalitarian ban.

In the matters of abortion, protecting the innocence of children, the very definition of marriage, and those laws and customs that promote and protect the natural family, Christians have on their side not only the word of God, but ordinary biology, anthropology readily observable by people of ordinary intelligence and no advanced education, logic, moral axioms common to every human civilization, and the thought of men of letters of the West for more than two thousand years.

This rich deposit of truth and wisdom all seems to count for nothing. You cannot use reason to defeat people who deny what reason is. You cannot remind people of the wisdom of the past when they neither know the past nor care to know. You cannot cite authority when your opponent's principle is that of the serpent: "You shall be as gods." You cannot appeal to nature to reach the soul of someone committed to perversion. You cannot show the beauty of male and female to people of ressentiment who desire that the family should sicken and die.

You cannot praise, with tears, the beauty of a vulnerable human child to people who place gain above goodness and so make their children pass through the fire to Moloch. It does not work. Church bells toll believers to prayer, but devils to the gnashing of teeth—and stratagems and spoils. Devils are loose in the land. I am not speaking about bad people, whereof we will always have plenty. My sins are enough to trouble me till my death. I am speaking about the real item, devils, and their malign possession of a nation's soul.

The Fruits of a Radical Ideology

Should we in the United States be so characterized? What affection we may have for democracy is severely tested by an ideology of radical egalitarian individualism. This ideology sacrifices duty to will, excellence to mediocrity, and a complex order to a simplistic egalitarianism that masks a staggering inequality between the state and every other association of a once free people.

That ideology has made the word hierarchy a slur, even while the people submit supinely to the most arrogant and meddlesome laws reaching into every feature of what once was the liberty of ordinary people in the ordinary duties of life.

It has made patriarchy a slur, even while millions of children grow up without fathers in the home, too many churches are staffed by feminists and sodomites, and innumerable boys grow up without the slightest direction or encouragement or even sympathy on their wayward journey to manhood, if they should manage to embark upon the journey at all.

This ideology, or idolatry, of individualistic, egalitarian "democracy" has given us now the worst of all worlds: puritanism without purity; censoriousness built upon evil standards, or delusional standards, or no standards at all; a First Commandment against making judgments that imply inequalities; and the coarsening and slow demise of high culture, with no vital folk culture to bring a new high culture to birth.

It has given us infanticide: butchering a baby alive and kicking. It has rejoiced in murdering the innocence of children. Even some churches chant happily along, Arch-High Songsters of the First Church of Ba'al.

The Only Good Left

How are we to feel about it? I am reminded of a scene from C. S. Lewis's Perelandra, in which the hero Ransom comes to understand what it is like to hate with a perfect hate, a clean white fire, that does not seek vengeance against persons for personal reasons, but against evil because it is evil. It is to share in the divine hatred for evil; what the psalmists sing of, what they often pray that God will make manifest.

Other than bare existence, justice is the only good left for God to grant to the self-determinedly wicked. The fire of charity is agony to them. Evidence is not far to seek. When you meet someone who celebrates the death of a baby, or who scowls and sulks to see a pure young man and woman in love, you see someone treading close to the brink of a cliff—the same over which plunged the swine, filled and maddened by a legion of devils.

My God, let it not be so for the country we still love, not yet. But if it must come, let it come swiftly. Let us pray for mercy for all persons. For nations—up to a point. But let God's justice storm as he wills.