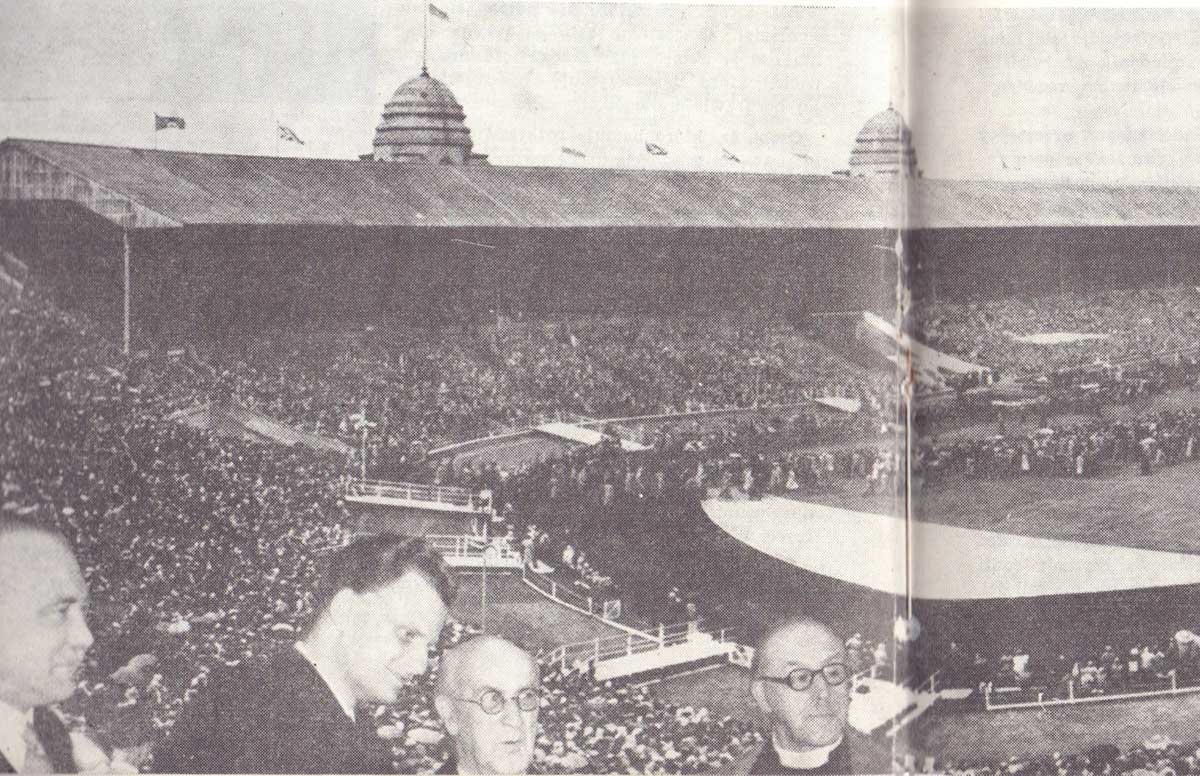 Laborers for the Harvest by James M. Kushiner

Laborers for the Harvest

Billy Graham's Legacy Is All Around Us
by James M. Kushiner

The passing of the Reverend Billy Graham marks the end of an era that began just after World War II, itself a watershed event. The world's most enlightened and civilized societies, industrialized and technologically advanced, engaged in an unprecedented level of military destruction and mass killing of both soldiers and civilians. A bitter harvest of sin sickened the world. Modern technology split the atom, and the war with Japan ended with twin convulsions of nuclear destruction in Hiroshima and Nagasaki.

After Japan's unconditional surrender, the psychological trauma of defeat and a loss of faith set in. In October 1945, General Douglas MacArthur urged Protestant leaders to send a thousand missionaries to Japan. In 1946, he met with two Catholic bishops, John F. O'Hara and Michael J. Ready, who later reported to the Vatican, "General MacArthur asked us to urge the sending of thousands of Catholic missionaries—at once." MacArthur said they had only a year to fill the spiritual vacuum in Japan.

Years later, MacArthur talked with evangelist Billy Graham about his efforts to get missionaries sent to Japan right after the war. MacArthur mentioned that the emperor of Japan had offered to make Christianity the state religion, but the general believed that conversions should be a matter of free choice and so rejected the offer. But, MacArthur told Graham, he did ask for 10,000 missionaries to go to Japan. That number was not realized, but by the end of America's occupation in 1952, between 2,000 and 3,000 missionaries had visited the country. There was a reported 19 percent increase in the number of Japanese Christians during that time, but this growth ended after the occupation.

Graham first related that conversation with MacArthur at a Mayor's Prayer Breakfast in 1964. According to the New York Times, Graham also

told his breakfast audience that "moral degeneration is all around us" in the United States.

Referring to the title of the motion picture "The Fall of the Roman Empire," he posed a question of whether the nation was heading for dissolution or disaster.

"We don't know," he said. "But I do know this, that periodically God must send a moral and spiritual awakening if this nation is to fulfill its destiny." (NYT, April 7, 1964)

Indeed, in the United States right after the war, an undeclared "nuclear" war was launched on the nuclear family, splitting sex from marriage, severing procreation from sex, and encouraging a sexual rebellion that spawned a culture of death. This anti-culture, like Hitler and Japan, had imperial ambitions. An evil empire, it colonized other cultures with pornography, non-marital sexual expressions, no-fault divorce, and abortion, promoting them as keys to human flourishing.

From the beginning of his ministry to its end, Graham successfully preached crusades to millions, swelling the ranks of believing Christians. While this war continued, he was a fellow-soldier of Christ with men like C. S. Lewis and John Paul II, each of whom saw the battle with modernity in the clearest terms and effectively kindled the light of faith in Christ in the hearts of millions. The Baptist evangelist, Anglican author, and Catholic pope shared a ministry pointing not to themselves but to Christ, the Savior. Graham refused to let denominational differences hinder his crusades. He did not instruct his converts on which church to attend, though he was vilified for that by many.

Meanwhile, the anti-culture, as deadly as fascism and communism, also continued to spread. Yet fascism had already collapsed, and communism later fell, largely by the hands and hearts of believers in Eastern Europe, many of whom had heard both John Paul II and Billy Graham behind the Iron Curtain. Many Catholics supported Graham's ministry, and John Paul said to him, "We are brothers," while Graham called the pope an evangelist of the Cross. The Christ-centered mere Christianity they shared unites all believers in an ecumenism of the trenches.

Perhaps the fact that America today is more Christian than Western Europe is due to Graham's evangelism and its ongoing fruitfulness in the lives of others. The culture of death continues, yet there are also always new opportunities for the gospel. Might there arise in the West a loss of faith in secular moral relativism and sexual amorality? Might not victims of the culture of death be yearning for deliverance? How long can any "culture" survive on phantasms of gender fluidity and social-media-constructed selves? Is there a growing restlessness in this empire of falsehood?

Like Japan after the war, the West needs 10,000 missionaries today. Indeed, some Christians from Africa and Asia see the West, rightly, as a mission field. But where will the missionaries come from?

They are already here. The light of Christ shines in the hearts of more than 10,000 Christians. Billy Graham invited his hearers to make decisions for Christ. Millions did. Many of these converts are no longer with us. But many are; some of us are among them. He left behind a harvest of believers—and their converts in turn.

All believers carry the light of the gospel. Each of us has a decision to make every day: not only to identify with Christ, but also to arm ourselves with an unfailing resolve to fulfill the second part of the Great Commission—to observe all that the Lord Jesus has commanded us.

Obedience to Christ calls for faithful witness in the way we conduct business, vote, legislate, adjudicate, buy, consume, entertain ourselves, read, sing, pray, worship, and treat our neighbors, our enemies, and the foreigner in our midst. It dictates the way we think of sex and our sexual behavior, how we treat the opposite sex, our spouses, our children, and our parents. Confident obedience in every area of life, along with a willingness to give a defense for the hope we have in Christ, can be a lifeline to victims of the culture of death.

The dark dominion of the culture of death can be overcome. It will take a military operation along the lines of Ephesians 6, for we wrestle not against flesh and blood, but against principalities, powers, and the spiritual hosts of darkness. It will take a daily spiritual crusade by Christians who are not just hearers of the Word but also doers, who change their lives and behavior through the power of the Spirit of Jesus.

Billy Graham's ministry was not about him. He labored for the love of Jesus. Now is not the time to shrink back, but as enlisted soldiers to bear the crosses in our lives for the love of Jesus, so that others may see the light of Christ. Although final victory will come only when the Lord returns, obedient laborers for the harvest are needed today. But it remains our decision to make.