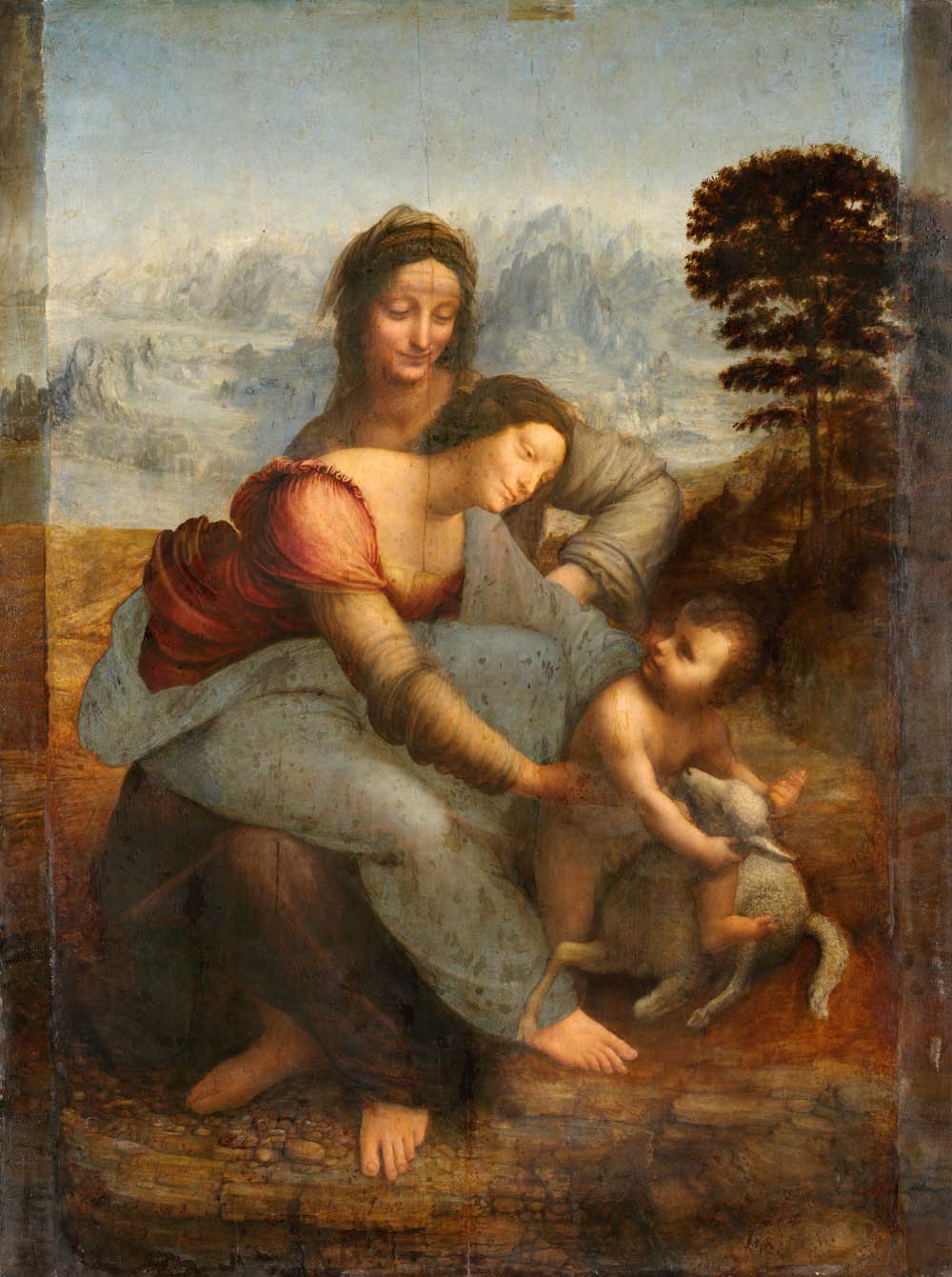 The Madonna and Child with Saint Anne has long been regarded as a problem picture, not only for us but also for Leonardo. The iconography creates a fundamentally impossible visual dilemma: how to combine two adult figures and a small child into a dramatic and unified whole, giving each one equal weight and successfully conveying the theological concepts they traditionally stand for. Earlier solutions like Masaccio's (Figure 1) imposed a medieval hierarchy of scale and at best created interlocking generational boxes to form a kind of human trinity of Christ's human genesis. Such a static devotional image did not satisfy Leonardo, who sought always for drama and a deeper exploration of theological meaning.

Nor were his first attempts satisfactory, at least to him. In 1499 he designed and drew a version of the subject (Figure 2) with Mary seated in St. Anne's lap and holding the infant Jesus, who in turn embraces a young John the Baptist. This version was never actually painted. A second design was executed in 1501 and described in a letter by Pietro da Novellare: there, Jesus was shown grappling with a lamb while Mary restrains him and Anne looks on. That version also was never painted, and the drawing is now lost. Our version was probably begun around 1510. It may have been commissioned by Leonardo's patron, Louis XII of France, at the birth of his daughter. His wife, Anne de Bretagne, had suffered a string of miscarriages and stillbirths; St. Anne, her name saint, was also the patron saint of childbirth. Whatever the commission, the patron was doomed to disappointment. The painting, still unfinished, remained in Leonardo's possession at the time of his death in 1519.

Leonardo's final solution resembles the one described in 1501: Mary is seated in her mother's lap, reaching out to her son, who grasps the lamb by its ear and attempts to straddle it. The figures are arranged within a strong triangular shape, its base firmly set on the ground and rising to the apex at Anne's head. Inside this stable pyramid, however, things get a bit more complex. Leonardo knits together the various serpentine figures and their gazes into a lively spiral motion that the scholar Kenneth Clark likens to "some very complex machine, designed to rotate and to be placed on a rotating platform." Yet within the complexity there remains a dramatic unity and a balance, if an asymmetrical one, enlivened by its internal variety of gesture and movement.