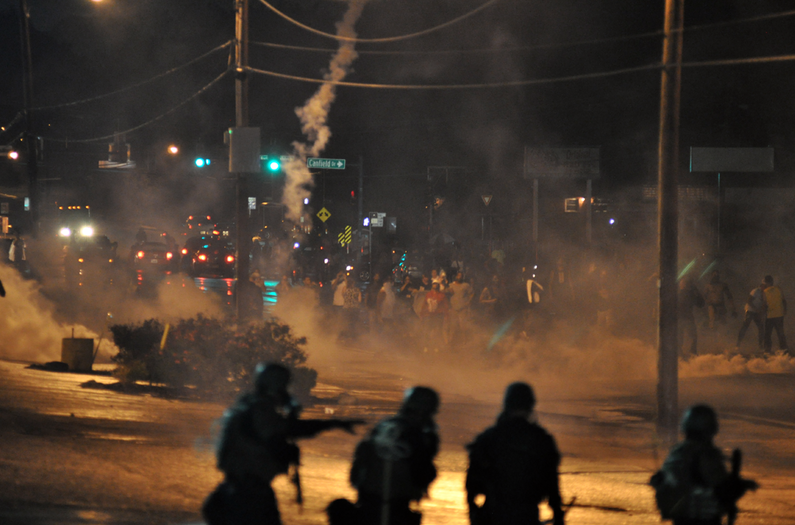 History, Theology & Mythmaking from a Deadly Encounter
by James Hitchcock

A year ago the modest-sized suburban community of Ferguson, Missouri (population 21,000), achieved a worldwide infamy that seems likely to endure for decades, the very name of the town having become shorthand for a myth that goes far beyond what actually happened there.

The verifiable core of the myth was the death of Michael Brown, an 18-year-old black man and Ferguson resident who had an altercation with a white police officer, Darren Wilson, as Brown was walking in the middle of a street. What exactly happened is unclear, but during the altercation Wilson shot Brown to death.

The first level of mythologizing was the claim that Brown, a "gentle giant" who had no criminal tendencies, was shot in cold blood as he was running away from Wilson. But as the investigation unfolded, it turned out that Brown was facing towards the policeman and, according to some accounts, lunging towards him when he was shot. Just prior to the incident, Brown had strong-armed a clerk in a convenience store and stolen a pack of cigars. He had also been using marijuana. Brown's alleged last words—"Hands up! Don't shoot!"—became the principal mantra of the developing myth, but Brown almost certainly did not utter them.

For days afterwards there were riots, both in Ferguson and other parts of the St. Louis area, with much of Ferguson's business district destroyed. (The liberal governor of Missouri, Jay Nixon, after first promising help, ordered the National Guard to remain passive as stores were torched and looted.) In April 2015, nine months after Brown's death, mobs again surged through Ferguson looting and burning, supposedly in protest of the killing of a black man in Baltimore.

Before there was reliable information as to what had actually happened to Brown, there were enraged demands—backed by threats—that Wilson, who went into hiding and later resigned from the police force, be charged with murder, and there was further rioting when a grand jury found no grounds for indictment. (Eventually the federal Justice Department reached the same conclusion, but even that did not end the demands that Wilson be punished.)

From the beginning, Brown's enraged supporters in effect denied the principle "innocent until proven guilty." Despite confused accounts, it was taken as fact that Wilson was a murderer, an assumption that was shared by much liberal opinion, led by the St. Louis Post-Dispatch, which only slowly and reluctantly scaled back its account as more information became available.

Dorian Johnson, another "gentle giant," who was with Brown when he was killed, was the principal source of stories about the shooting, but his testimony was found to be completely inconsistent with the physical evidence. (Months later he was arrested and charged with drug dealing and resisting arrest.)

The St. Louis County circuit attorney, Robert McCulloch, who presided over the grand jury investigation, was proclaimed to be biased, on the grounds that his father was a policeman who had been killed by a criminal. McCulloch was also denounced for making available to the public much of the grand jury testimony, virtually none of which supported the Brown myth. Liberals spoke of "the failures of the grand jury process to indict the police officers involved," and law professors took to the pages of the Post-Dispatch to explain that it was the business of grand juries to indict people, not to exonerate them. When McCulloch spoke at St. Louis University Law School, his alma mater, he was treated rudely.