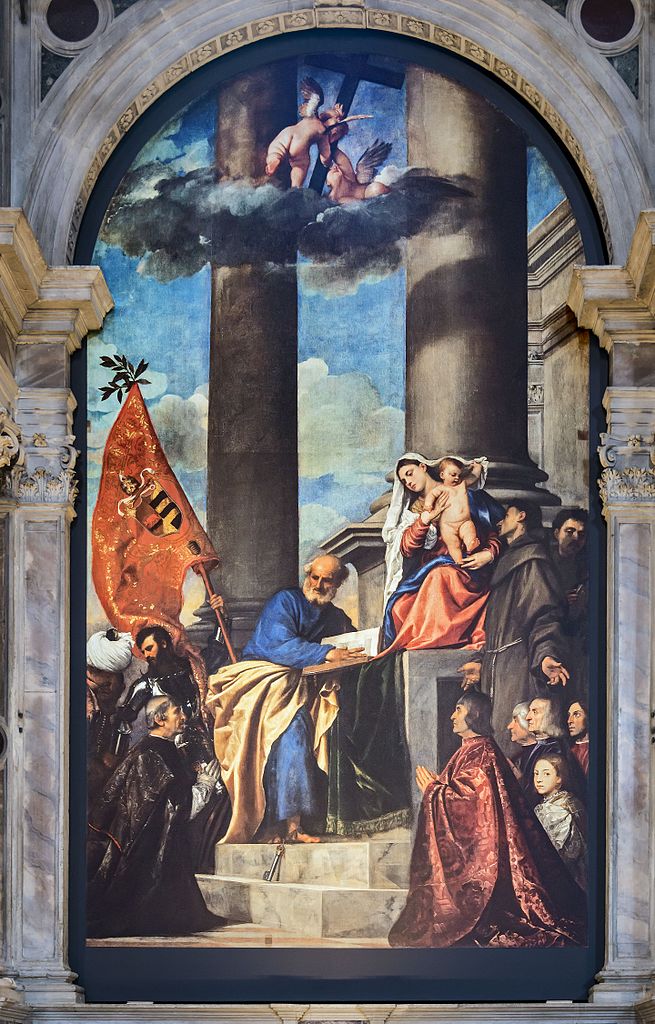 In 1518, the Pesaro family acquired a side chapel in the Basilica di Santa Maria Gloriosa dei Frari, the Franciscan church in Venice, to use as a funerary -memorial. Titian, who had just finished a glorious Assumption for the main altar, was seized upon to do the decoration. The altarpiece he designed, the Pesaro -Madonna, combines several types of pictures familiar to Venetians of the day into one. It is a Sacra Conversazione, in which the Madonna enthroned communes with a gathering of saints; it is an ex voto, an offering given in thanks for favors received; and it is a family portrait, a statement about the stature and character of the people portrayed.
If we start by identifying the cast of characters, we will quickly unravel what the painter had in mind. -Starting at the lower left, the kneeling figure in black is Jacopo Pesaro, who commissioned the altarpiece. Jacopo was bishop of Paphos on Cyprus and keeper of the Papal Galleys under Pope Alexander VI. In 1502, his ships scored a major victory over the Turks, for which the painting is a thank offering. Behind Jacopo stands a soldier unfurling a great red standard bearing both the papal and the Pesaro arms, and instead of a finial, the olive branch of peace. He turns his head toward a turbaned figure at the far left, presumably a captured Turk.

The soldier may be more than an ordinary soldier. He stands up a step from Jacopo, on a level with the saints, and may therefore be St. George, foe of heresy (usually represented as a dragon), but here turning amicably toward the heretical Muslim under the banner of peace, and presenting him to St. Peter, patron saint of the pope and the Church at large.