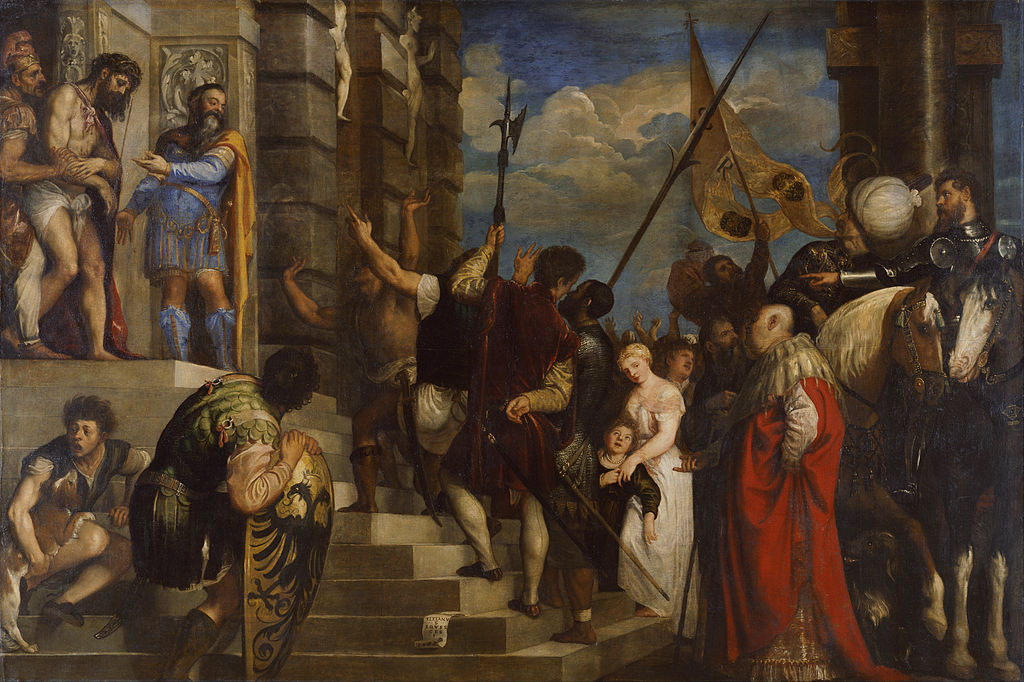 The subject of this 1543 painting, Christ before Pilate, is unusual in Italian art of this period, and certainly this particular portrayal is unusual in every way. For one thing, it is hugely asymmetrical. The main body of the canvas is taken up by a wedge of agitated figures surging from right to left and up the staircase at the left. The same stairs lead from our space up to Christ and Pilate, but our way is blocked by a soldier and a man with a dog. And only in the uppermost corner, as if in their own frame, stand the two crucial characters in the drama, at the pivotal point at which Jesus is definitively condemned to death. Even more unusual, he seems, with a few exceptions, to be betrayed by a crowd of Titian's own contemporaries.

The fact of the painting's commissioning may account for some of these anomalies. The canvas was not designed for a religious setting but for the decoration of a private palace. The patron, a Flemish merchant named Giovanni van Haanen (who in Italy called himself D'Anna), probably chose the subject—it was much more commonly painted in northern Europe—and allowed the painter considerable leeway for imaginative expression.

On a narrative level, the Gospel passage is presented in a straightforward fashion. However, paintings from this period can almost always be read on more than one level. On what we might call the contemporary level, we might query who all these sixteenth-century people might be. The scholar Raymond Waddington suggests that they might have served to remind Titian's audience that "more often than he is imitated, Christ continues to be betrayed and denied," and surely he is correct, but there is more.

As early as 1648, but more than a hundred years after the painting's execution, the biographer Carlo Ridolfi identified (not always correctly) a number of recognizable portraits within the crowd. Today, scholars generally recognize the horseman at the far right (Figure 1, right) to be Alfonso d'Avalos, the Spanish ambassador of the Hapsburg court to Venice. Titian painted his portrait at least twice, and had close ties to the Hapsburgs. He also painted Emperor Charles V, and was thereafter made an Imperial Knight: he signed the Ecce Homo "Titianus Eques Ces. f[ecit]" ("Titian, Knight of Caesar, made [this]")and included the Hapsburg eagle on the soldier's shield at the left.

Titian's friend Pietro Aretino wrote flatteringly of Alfonso d'Avalos that he was the exemplar of the miles christianus, the Christian knight, yet while D'Avalos led successful campaigns against the Turks, he was also instrumental in brokering a thirty-year peace with Suleiman the Magnificent. Suleiman, the Turkish sultan and figurehead of all Islam, also appears in the painting (Figure 1, left), wearing his enormous turban and looking where Alfonso points, toward Pilate and Christ.

Beside them stands a magnificent bald figure in red. This is not likely a portrait, though some claim otherwise, but rather an archetype or quasi-caricature learned from Northern art: his shaven head, jowls, profile cast in darkness and obdurate gesture of hand on hip mark him out as Caiaphas, the Jewish high priest. Beside him, though, the woman in white has long been identified as Titian's daughter Lavinia, and the child clinging to her as possibly the child of the writer Pietro Aretino.

Whoever the child might be, the figure of Pilate is definitely identified as Aretino himself; we know his features well from Titian's portrait of him. A libertine, a scurrilous satirist and occasional pornographer, Aretino in 1535 also wrote a touching and emotive biography of Jesus, La Humanità di Cristo, in which he portrays Pilate in a more sympathetic light than others before him had done. In the painting, Pilate's sympathies seem to lie with Jesus. He turns his body in Christ's direction and reaches out almost as if to embrace him; only his face turns to the hostile crowd (Figure 2). He is clothed in pale blue, as if to link Christ to the realm of heaven, the serene sky above the howling mob.

The architecture to Pilate's left is also a kind of portrait. A contemporary Venetian would have recognized the two sculptures just glimpsed in their niches as the Adam and Eve from the Foscari Arch just at the entrance to the doge's palace. Antonio Rizzo's statues show our original parents just after the Fall, in the attitudes of shame and dejection that are the consequence of sin. They stand at the entryway to the doge's court, the place where punishment was meted out for contemporary sins. So therefore, Pilate and, more importantly, Christ stand in the place of judgment. Christ's kingly robe has slipped to one side and his reed scepter is barely visible; he stands battered and bruised in the pose of the Byzantine icon of Extreme Humility, yet still he is the ultimate judge.