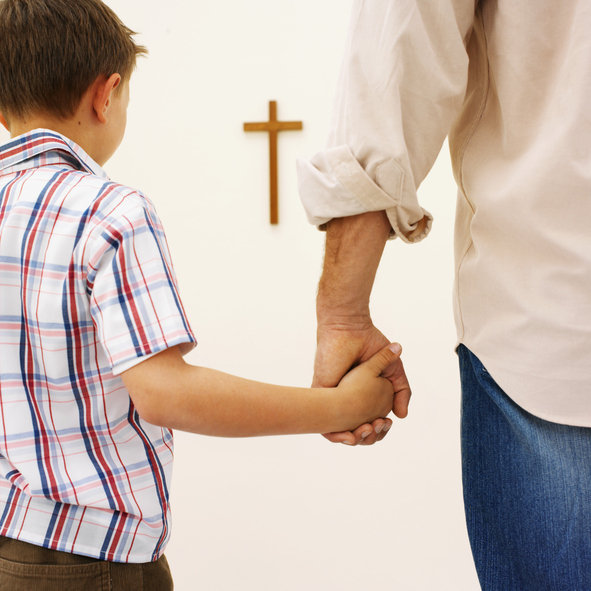 S. M. Hutchens on Mere Christianity That Is Not Merely Mine

As a young father I entertained fear of the possibility that my children would someday tell me they weren’t interested in my religion— my religion—along with the fear that if that day ever came, I wouldn’t blame them. For I knew my frame: It is dust, and the possible failures of a father who professes a certain knowledge of God to his children that would justify their rejection of “his religion” were manifold.

What, for example, if I, afraid they would harm themselves in the follies of youth, dominated them in a harmful way, or, afraid of the evil in that, became too weak to serve them with proper discipline? What if my children, damaged by my own failures, perceived the connection between these and “my religion”—always supremely easy to do—and were able to make this their excuse to depart into a far country, so that part of the terrible sorrow I would feel at this came from my own culpable knowledge that “my religion” was a justifiable part of their reason for it?

So I essayed to teach them in indirect but unmistakable ways as they were growing up that my religion is not my religion. I received it from my parents, who received it from theirs. The Christian faith in my family is, as best I can tell, deep and old. It is mine because I have inherited it from them, and did not throw it away, but held it in trust for my own children, to pass it on from their believing ancestors.

Early on, I wanted to teach them in whatever way I could that rejecting it would not be simply a matter of casting away the tastes or idiosyncrasies or opiates or methods of control of their immediate parents, but a belief about the nature of reality, and way of life harmonious therewith, attested by many very different people over many years and under a great variety of personal circumstances, whose faith and teaching flows in our veins just as their blood does.

While my children are free to choose or reject it, they were made to understand that what they choose to take as their own, or reject, is not simply their parents’ religion, but a faith much older, in which the significance of differences and faults of each of its holders, including those of the “denominations” to which they belonged, are relativized in the march of time so that the One Great Thing to be accepted or rejected from their parentage stands out in high relief, not as my religion, or even our family religion, but the Christian faith.

If, indeed, this faith is our patrimony, it must be catholic, for it must survive as distinctly itself as passed down through our ancestors who were Roman Catholics, Anglicans, Quakers, Presbyterians, and Baptists, and who, despite the disruptions of their fellowship, each believed and transmitted what all Christians, everywhere, and at all times, have confessed.

I remember seeing, when I was a boy, a silly tract that justified the faith of our sect by tracing it back to the New Testament through a series of medieval heresies. If that were true, it would be reason to leave as quickly as possible—and the more learned of our church wisely repudiated it. The basic idea, however, was correct: Any faith that can be denominated Christian must have a right pedigree; it must go directly back to the apostles in a true line, passed down accurately from generation to generation, so that no one who calls himself a Christian can say “my religion,” apart from owning a faith that came from others.

So, what I attempted to give to my children as their true patrimony was not a private faith, whether of a single man, or a family, or a denominational group, but what Baxter and Lewis identified as “mere Christianity” in whatever churches the family associated with at different times in our history—something ancient and universal, something infinitely weightier and worthier of consideration than any of its particular and invariably faulty expressions.

Some years ago I was invited to address interested members of a large Roman Catholic church on a subject I can’t now remember. The pastor was a very conservative priest of what my Catholic friends would call the “Old School,” evidently a bit uncomfortable with the idea of having a Protestant address his people—but I had been well vouched-for by Catholics he trusted, so spoke to several hundred members of his parish, teaching something upon which Roman Catholics and orthodox (may I call them?) Protestants are, and always have been, in full agreement, something “merely Christian.”

When the floor was opened for questions from curious Catholics, one can imagine what happened. The topic was abandoned immediately for the things Catholic lay people really wanted to know from a Protestant priest and doctor of theology. Clearly a good many of them wanted me to criticize their church: Why are you a Protestant? What do you think of this teaching of the pope? There was a good deal of surprise on how much agreement there was, even on moral teaching, between a conservative Protestant and the official dogma of the Catholic Church. It wasn’t what they expected, and on the matters with which a number of the liberalized Catholics expected Protestants to disagree, this one didn’t.

Very few had enough sophistication to know what the actual theological disputes between Protestants and Catholics have been, so when the few questions came up that concerned them, I emphasized that I was not there to speak of these, but our agreements, and I felt that in this instance courtesy demanded I do only that. I was speaking as a Christian to fellow Christians that day, not as a Protestant to Catholics.

Now, to a Catholic, and I would suppose to the Orthodox, mutatis mutandis, the concept of “mere Christianity” is, to say the least, problematic. In C. S. Lewis it stands for the Vincentian canon—the faith of the Church—and Protestants, Catholics, and Orthodox identify the Church differently.

But still, it was good for me to be at this Catholic church, teaching its members as best I could what I tried to show my own children. Taking liberties with Catholic teaching in response to the influence of modernism, even to the point of turning their backs on their church, was not simply a matter of looking Father O’Flaherty, or even the pope, square in the eye and announcing they were throwing off the Roman yoke. I hoped they saw that if even a Protestant believed not only the whole Creed, but most of what bothered them about the beliefs of their own communion, then perhaps some of them were attempting to overthrow something considerably larger than they conceived their own father’s religion to be.

The principal ministry of Touchstone and the Fellowship of St. James is, I believe, to provide, in this time of temporary division between the churches, a three-voiced witness to what all Christians believe. The attempts to obscure this common witness, to confuse and divide even further, are strong and insistent. We are by nature “conservative” because we are attempting to keep what we already have, to pass it to the children of our bodies and souls, and to do it in such a way that it cannot be mistaken for merely “their father’s religion.” •