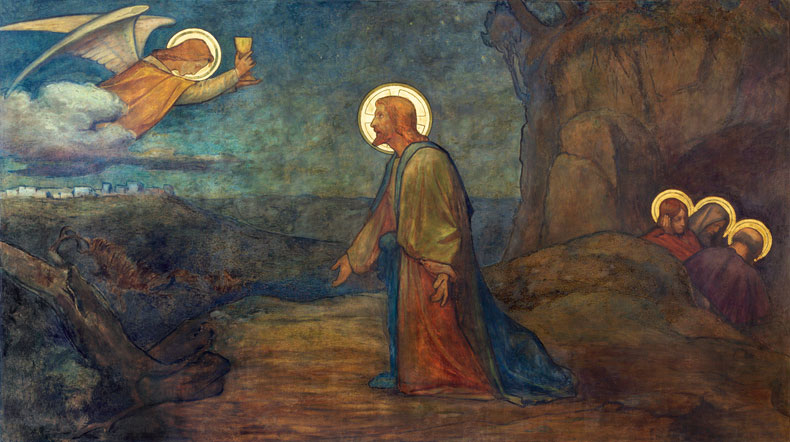 The Agony of Gethsemane by Patrick Henry Reardon

The Agony of Gethsemane

Perhaps no part of the Gospel narrative of the Lord’s Passion manifests more dramatically what St. Paul called “the weakness of God” (1 Cor. 1:25) than the account of Jesus’ trial in the garden. Indeed, when the pagan Celsus, late in the second century, wrote the first formal treatise against the Christian faith, he cited that Gospel scene in order to assault the doctrine of Jesus’ divinity: “Why does he shriek and lament and pray to escape the fear of destruction, speaking thus: ‘Father, if it is possible, let this cup pass from me’?”

Celsus greatly oversimplified the story of course. Refuting him in the following century, Origen remarked that the Gospels do not claim that Jesus “lamented” ( oduretai) his coming death and that Celsus failed to note that the foregoing prayer of Jesus was immediately followed by the words, “Nevertheless, not my will, but yours be done,” a sentiment demonstrating our Lord’s “piety and greatness of soul,” his “firmness,” and his “willingness to suffer.”

Needless to say, all Christians are at one with Origen’s critique of Celsus on this point, but they should also consider the force of that pagan’s blasphemous attack. Although Celsus’s “malice” ( kakourgon) denied him access to the true meaning of the agony in the garden, that dolorous event at least instructed this unbeliever with respect to Jesus’ full humanity. In fact, Celsus reasoned, Jesus in the garden was so utterly human that he could not possibly have been divine.

Even as we reject that heretical conclusion, we also recognize that the fullness of Jesus’ humanity was most manifest in that event described by the Epistle to the Hebrews as “the days of his flesh” (5:7). In the Lord’s experience in the garden, we perceive the most profound inferences of the doctrine of the Incarnation.

Indeed, this is the very reason that the early Church made no secret of the Lord’s agony in the garden. In all the Gospels except John, Judas’s treachery toward Jesus on “the night in which he was betrayed” (1 Cor. 11:23) is preceded by an account of our Lord’s prayer in the garden, which thus becomes the opening scene of his sufferings.

In the comments that follow, it is my purpose to examine these Gospel accounts, along with the parallel narrative in the Epistle to the Hebrews, in order to reflect theologically on the significance of the trial and prayer of Jesus in the garden and the special, mysterious place that Holy Scripture recognizes in that event in the accomplishment of our redemption.

The Mystery of Sadness

Interpreting the death and resurrection of Jesus in the light of biblical literature (cf. 1 Cor. 15:3–4), the early Christians savored the contrast between the disobedience of Adam and the obedience of Christ. They perceived that whereas the first man attempted, in rebellion, to become God’s equal, the second, “being in the form of God, did not regard being equal to God a usurpation [ harpagmos], but he emptied himself, taking the form of a slave, being made in the likeness of men, and being found in shape as a man, he humbled himself, becoming obedient unto death” (Phil. 2:6–8, my translation).

In the Epistle to the Romans, the Apostle Paul further elaborated the disparity between Adam and Jesus, observing that, “as by one man’s disobedience many were made sinners, so also by one Man’s obedience many will be made righteous” (5:19).