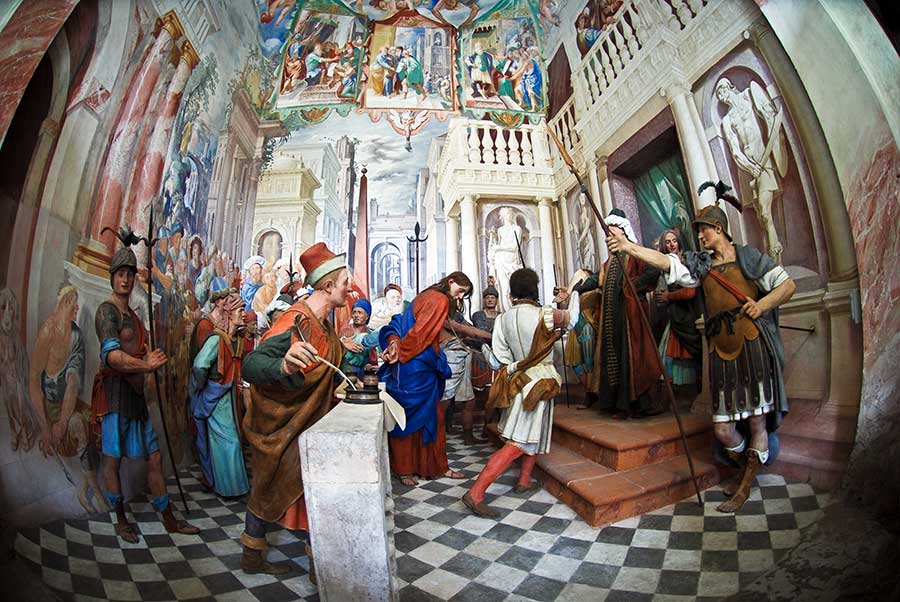 “We Don't Torment Jesus. We Only Question Him”
by S. M. Hutchens

Say a person professes he does or does not “believe in traditional morality.” On one hand, everyone knows what “traditional morality” means: following the law of God found in the Ten Commandments, the universal Tao: do not steal, do no murder, do not commit adultery, honor your father and mother, and so on. But on the other hand, there are always those who wish to “find out precisely what this means” by subjecting the term to analysis: “What, exactly,” they ask, “do we mean by this, for in one culture traditional morality allows polygamy and in another it doesn’t; to some, war is theft, while others see it in heroic terms?” Some believe concerns about “sin” should be overridden for the greater good, while others do not.

At the end of this process, nothing is left but ashes: there is no such thing, really, as “traditional morality”—even though everyone not only knows that there is, but also has a pretty good idea of what it looks like—and knows that it carries with it an “ought,” a moral imperative that applies to everyone. The proposition that “traditional morality” exists and that one should order his life in accordance therewith, along with every other intelligible sentence, analytic or synthetic, breaks down under analysis—this Greek word means “a breaking apart”—and along with this comes the breaking of intelligible discourse altogether. For analysis, as a dis-assembling of a meaningful unity, of something meaningful only as a unity, is an agent of chaos, of brokenness.

This occurred to me with particular force while listening to an Orthodox nun, of all people, complaining continuously in an interview that her religion did not allow her (or, of course, anyone else) to question—for innocent enlightenment and in the service of freedom and truth, of course—beliefs about sexual morality that had been established in her church—and, had she known it, in the whole world—from the beginning. In her persistence she reminded me of a quotation attributed to a demon in the process of exorcism (perhaps by Malachi Martin): “We don’t torment Jesus. We only question him.”

What the nun and the demon were both calling for was analysis, a breaking down of what the Church has always insisted is Truth into pieces which no longer fit together in an integral and meaningful unity. The poor, impertinent nun was only troubled about its laws governing sexual morality, while the devils (and their allied theologians) want to analyze Christ, whose cross was their attempt to tear him apart, to question him—to make him a chaotic nullity—as best they could.

Why Truth Will Endure

The meaningful proposition, however, has the disturbing power of reasserting itself as meaningful, analyze it as one might. It will never really go away. It remains, even when thrust out into the void, the ontological token of a Reality that hovers over and haunts all attempts at analytical deconstruction. Those who question (and it is always for a self-serving cause) “traditional morality,” for example, cannot do it without calling that very morality into their service in the proof of the disinterestedness of their work. In their zeal to fight what they wish to identify as a lie and justify analyzing it away, they call and affirm the simple peasant truth (traditional morality) as their witness.

They and their lie (and its Father) cannot endure because Truth will not go away; the reason at the foundation of this is that Jesus Christ rose from the dead. He could not be suppressed by analysis, that is, by death. That is why truth in all its forms, including the propositional and intuitional, all of which is Christophoric—containing Christ himself in the mystery of the creation which subsists in him who is its meaning—will endure.

The assurance of this does not lie in the mere proposition or intuition itself, or even in its correspondence with Reality abstractly considered, but fully and precisely in the belief that “Thou wilt not leave his soul in hell; neither wilt thou suffer thine Holy One to see corruption [dis-integration].” It is this belief upon which we not only rest our own hope of resurrection in him to eternal life, but upon which rests the enduring truth of all that we speak in faith.

more on theology from the online archives