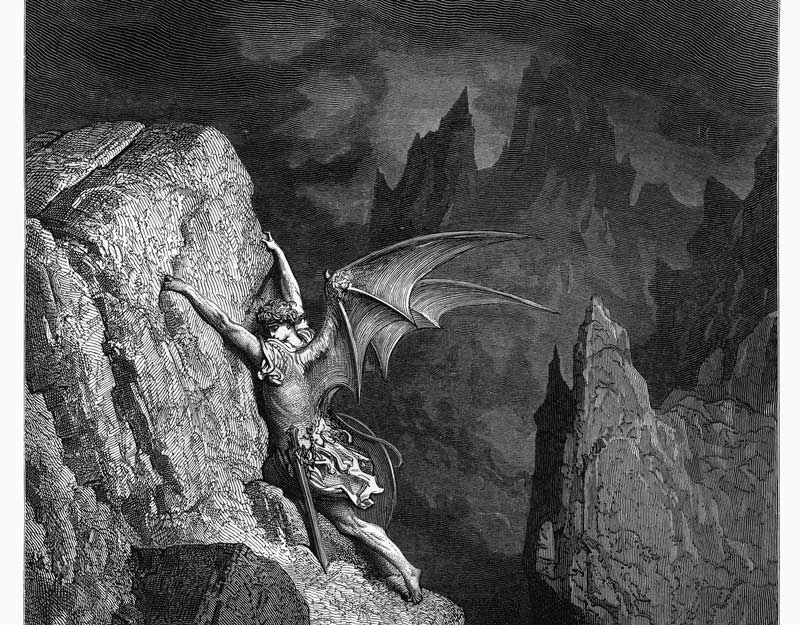 A Liar & the Father of Lies by Anthony Esolen

A Liar & the Father of Lies

Milton's Satan & the Confusion of the Mind
by Anthony Esolen

"Why do you not know my speech?" Jesus asked of the Pharisees, who had already witnessed the wonders he wrought, though they did not greet them with wonder, or even childlike delight. "Because you cannot hear my word," he answers. "You are of your father the devil," that is, the Accuser. "He was a murderer from the beginning, and he stood not in the truth; because truth is not in him. When he speaketh a lie, he speaketh of his own; for he is a liar, and the father thereof" (John 8:43–44).

There are two sorts of people who do not hear the words of Jesus. There are those who have never heard them, and they include many in our midst who believe they have heard them—vaguely, loosely, merely as rumors, and often not reliable. And there are those who have set themselves against those words. We dare not judge the individual case, but it is a wholly different matter if we are talking about a culture, or the remains of a culture, or a civilization. Then we must ask whether that people, most miserable, and making misery for others, have given themselves over to the lie.

Here I recall the shrewd words of Whittaker Chambers at the beginning of Witness, when he is describing for his children, who he hopes will read the book someday, what Communism is. Chambers says it is not the dictatorship of the proletariat, or the collectivization of farms, or anything else identifiably political or economic. Communism is, he says, the world's second-oldest religion, summed up in the words of Satan, the murderer "from the beginning," by which Jesus does not simply mean "a long time ago." Satan is the anti-creator, the murderer, the destroyer, the accuser, who says to Eve, "Ye shall be as gods" (Gen. 3:5).

That is more than an alternative idea about the created order. The very notion of creation is at stake: either we have a created order, which implies a Creator and which calls us to gratitude and to a harmonious acceptance of that order, even as man is God's viceroy and the chief of the physical universe, or we do not have a created order, and then we play at being gods ourselves. Nature is mere stuff to dominate, and that means, practically speaking, as C. S. Lewis says in The Abolition of Man, that either man dominates Nature by using other men as the tools, or man subjects himself to be dominated, because he bears no more inherent meaning than does a horse, or a tree, or the dirt beneath his feet. The lie is put in the service of violence. That is what the lie is for.

All Sin in One Lie

How do I deceive thee? Let me count the ways. Here I will enumerate four of them, as manifest in John Milton's Paradise Lost: four objects of false witness. In each case, I will describe at least one way in which the West that has rejected Jesus utters such lies, at the expense of human life, and often precisely to destroy human life.

But first let me stress that the line, "Ye shall be as gods," is more than a bit of trickery. That lie contains within itself all sin, all evil: it breaks all the commandments at once.

It is an act of idolatry: self-worship, an abasement, in place of the sublime worship of God. It takes the name of God in vain; Satan has reduced the sacred plural Elohim, a name that mysteriously suggests the plenitude of God, and that Christians believe is an intimation of the Trinity, into any old plural, a reduction of God to a creature. It is directly opposed to the calm and joyful rest of the Sabbath; it says, "Do this, do this right now, and you shall have power to do much more."

It is impiety against the Father. It is murderous, and indeed murder is the first sin we are told of after Adam and Eve are expelled from the garden; it would gladly hail the death of God. It is a lust for strange flesh: as if some created thing could delight, in the place of the God who made Adam and who gave Eve to him as his helpmeet; and we see the sadness of bodily shame in the aftermath of this lust. It is theft, because the fruit of the tree is not theirs to eat. It is false witness against God—whom Satan portrays as petty, envious, not desirous of the best for the human couple.

It is coveting, with a vengeance. Satan does not simply want Eve to eat the fruit. He wants her to long to eat it: "And the woman saw that the fruit was good to eat, and fair to the eyes, and delightful to behold" (Gen. 3:6). And the rest of Genesis is a saga of the corruption of human desire, most clearly evident in the many ways we get procreation wrong. Man, we may say, is corrupted in the seed.