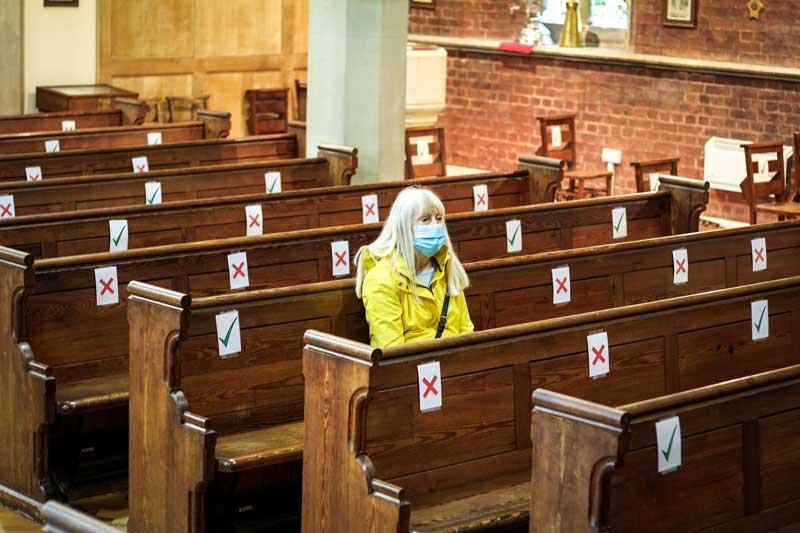 The Church Unmasked by Aaron Ames

Aaron Ames on the Church's Failure in the Pandemic as Symptomatic

When once we are finally unmasked, what will be revealed about us? The year 2020 was almost certainly the first time in history that the global Christian Church collectively shut its doors for any significant length of time. While the Covid pandemic has sparked an abundance of discussion about what it means to love one's neighbor, there has been little discussion about what it means to love God.

In a.d. 251, St. Dionysius, bishop of Alexandria, wrote that the devastating plague of his time, which "nearly killed" off the Roman Empire, "so far from being a time of distress, [was] a time of unimaginable joy."

This is the spirit in which the early Christians weathered two devastating pandemics, in the second and third centuries, that resulted in massive depopulation. As historian Edward Watts has detailed, "abandoned farms and depopulated towns dotted the countryside from Egypt to Germany." Yet beyond the nasty symptoms, Watts noted, "most of all . . . the disease spread fear." Hans Zinsser elaborates in Rats, Lice, and History:

[T]he forward march of Roman power and world organization was interrupted by the only force against which political genius and military valor were utterly helpless—epidemic disease . . . and when it came . . . all other things gave way, and men crouched in terror, abandoning all their quarrels, undertakings and ambitions.

Christians, however, rejected fear of death for love of God, neighbor, and enemy, and became the caretakers of the cities. According to Dionysius, while "the heathen . . . pushed the sufferers away and fled from their dearest, throwing them into the roads before they were dead," Christians "showed unbounded love and loyalty, never sparing themselves and thinking only of one another. Heedless of danger, they took charge of the sick, attending to their every need and ministering to them in Christ, and with them departed this life serenely happy."

What resulted was a massive surge of Christianity from the fringes of society to the center of society in a matter of a century. Indeed, this Christian vision was so formidable during these two pandemics that sociologist of religion Rodney Stark argues that, "had classical society not been disrupted and demoralized by these catastrophes, Christianity might never have become so dominant a faith."

In contrast to the early Church's embrace of the pandemic of its day, our contemporary Church has fled from the Covid pandemic, shutting its doors for fear of death and devastation. Whereas Jesus reached out and touched the leper, we have declared everyone a leper, and invited no touching. And when we did reopen our church doors, it was not without the aesthetic decorations of a multitude of otherwise out-of-place liturgies. With the sight of churchgoers, separated by a minimum of six feet, dotting the room in small, isolated pods, and standing with mouths and noses fully covered to sing "Thine Be the Glory" in muffled tones, one would be hard-pressed to believe that their element of ultimate concern was the crucified and risen Lord.

If our spiritual nourishment as Christians is predicated on regularly receiving the grace of God through communal fellowship, participating in the sacraments, and hearing the Word, then it is objectively true that our teachers and administrators have voluntarily overseen the single greatest withholding of spiritual nourishment in the history of Christianity. But placing blame squarely on church leaders would be unfair, considering how many churchgoers themselves welcomed the strictures, even sometimes demanded them. While some might blame their state governments for the mandated lockdowns, this, too, would be unfair, since so few churches dared even to protest, much less resist, such mandates.

What, after all, informs the Church's vision of the good life? For all the talk about the possible ineffectiveness of masks, their potentially harmful side effects, and their use as a tool of oppression, it is troubling how rarely the Christian subculture has entertained the more important spiritual question.

Aaron Ames has published articles for The Federalist, The Imaginative Conservative, and American Thinker, among others. He teaches rhetoric and logic at a classical school in Kentucky.