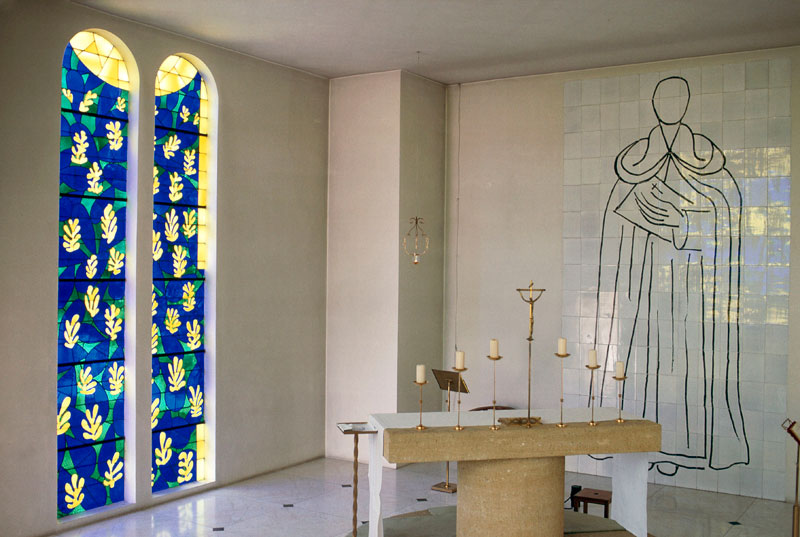 Henri Matisse's Chapel of the Rosary by Mary Elizabeth Podles

Henri Matisse's Chapel of the Rosary

Night nurse needed—Should be young and pretty." So ran the advertisement placed in 1941 by the 71-year-old artist Henri Matisse while he recovered from cancer surgery. Nursing student Monique Bourgeois answered the ad and not only nursed the convalescent painter but also became his model, studio assistant, and close friend. At this point Matisse was experimenting with the cutouts that eventually became the series known as Jazz: essentially drawing with his scissors, he cut brightly painted paper into shapes that his assistants pinned to the wall at his direction. An amateur artist herself, Monique helped to paint the colored paper and position the shapes, and, according to his biographers, Matisse found her to be "stimulating, funny, and touching."

Shortly thereafter, though, Bourgeois contracted tuberculosis and went to a convalescent home run by Dominican nuns in Vence. In 1943, refusing to leave France in spite of the war, Matisse moved to Vence, and the two resumed their friendship. But a stronger friendship called to Monique Bourgeois. She entered the Dominican novitiate and in 1946 took her permanent vows as Sister Jacques-Marie. Matisse had strongly objected to her vocation in his letters to her ("I do not need any lectures about religious calling. I've not needed the sacraments to glorify the name of God throughout my life"), but nevertheless they remained friends.

The Design of the Oratory