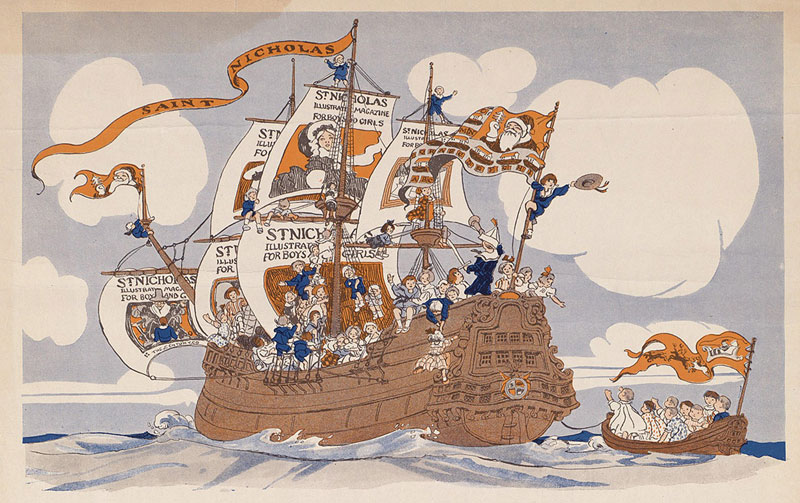 Letters of the St. Nicholas League by J. Douglas Johnson

Letters of the St. Nicholas League

When Once 100,000 Children Wrote the Best Magazine That Ever Was
by J. Douglas Johnson

Some years ago, I picked up two color cartoon prints at the Chicago Printer's Row Book Fair; they appeared to have come from an old children's book. In the first of two stills on the first print, a young boy imagines himself as a crazed-looking Kaiser Wilhelm in a Daniel Boone jacket. He waves his Bowie knife in the air as he chases down a frightened grizzly bear who is running for dear life.

In the second still on the same print, a lion and a tiger both stand poised and ready to attack our crazy Kaiser, who shoulders his rifle with point-blank aim at the lion's head. Beneath the second still is the following poem:

If I should meet a grizzly bear,
You'd see him quake and run;
He'd fear my knife, my eagle-eye
And bullets from my gun.

In the second print, the boy imagines himself as a happy sailor on a rowboat in pursuit of a whale:

A roving life's the one for me
Aboard a merry whaler;
I'd dance and sing and have my fling,
I'd be a jolly sailor.

To speak of whaling as a merry life or to instill in a boy's mind a sense of adventure over the threatened slaughter of an innocent and frightened grizzly bear is so offensive and intolerable to the modern mind that I purchased and framed both prints, which have hung in the entryway to my home ever since (at the time, I tried to convince my midshipman nephew to hang the second print on his dorm room wall, but he declined this generous offer).

After carting these treasures home, I did a search on the text of the poems and discovered that the prints had appeared in a 1909 issue of St. Nicholas, a magazine for children, which I soon would come to regard as the greatest magazine ever published. One of the (very) few glories of the internet age is the ability to track down 110-year-old back issues of a children's magazine that you can then purchase for a pittance. That first eBay purchase grew into a small stack of St. Nicholas magazines that I went on to accumulate over the ensuing months.

A Sampling of St. Nicholas

St. Nicholas was in circulation from 1873 to 1940. At its peak, in 1883, it had a circulation of 100,000, although its actual readership was some factor higher because its subscribers never actually threw their issues away, but simply passed them on to the next reader. The magazine featured illustrated serials, poems, drawings, science, history, occasional current events, and, most importantly, reader submissions.

I have the November 1899 issue open on my desk as I write. This issue begins with The Ballad of Charles Martel by William Hurd Hillyer: