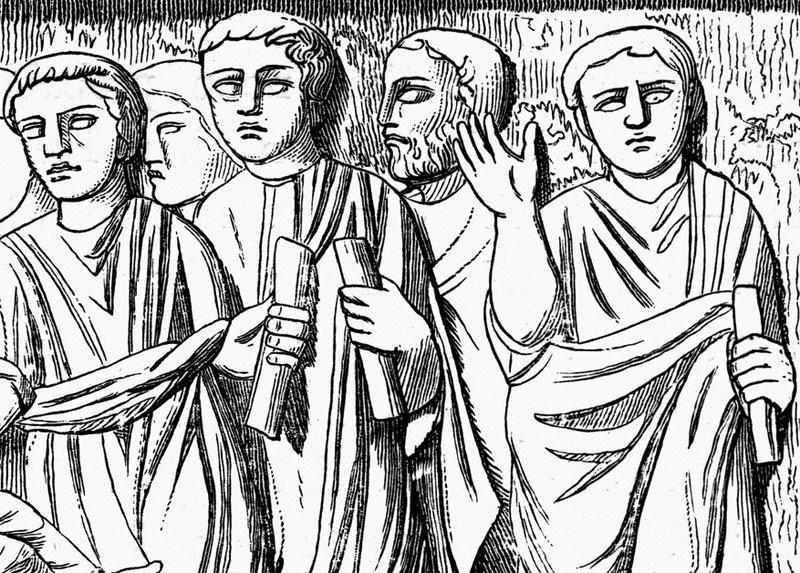 The Days of Avoiding Giving Offense Are Over

With only a few exceptions out of scores of appearances in the New Testament, the word "brothers" (adelphoi) refers to men and women collectively. And yet the common practice in the modern churches (I write this on a Sunday when I have had to hear an expansive bishop do it a half-dozen times), even those with orthodox pretensions, is to avoid this biblical use as an offense to women, as though identifying them as "brethren" were a transgression against their dignity and merit.

Surely there is no fault in referring to men and women severally on reasonable occasion.But heavily balancing church language against biblical language in these matters clearly serves the egalitarian heresy, which effaces the headship of the man over the woman and the biblical doctrine of her comprehension in him—as wicked and unspeakable as this doctrine is to the anti-hierarchalism of the modern way of thinking and the apologetic religion that apes it—and upon which reference to both sexes with masculine grammatical markers rests theologically. In Christianity and Orthodox Judaism—both inescapably patriarchal faiths—the woman is primordially contained within the man, and as such, her sex is related to his in such a way that her fundamentally derivative life is found in his federal priority, so that general references to men are also to women.

The inclusive "he," unanswered by a similar "she," is no accidental convention of language to Christians, but points to the anthropology of divine revelation upon which the adelphic practice rests. St. Paul teaches that this ultimately refers to the mystery of Christ and his Bride, the Church, who is founded in him and his Lordship over her, and is redeemed by a power of being she does not have in herself. As hateful as this doctrine is to egalitarians, the Church and her members exist redeemed in him and necessarily thus in his maleness, taking her very being from his, and may thus be named in his maleness as "brothers," whereas it is not true that men and women can be, in Christian terms, named in femaleness, for the Son of God, through whom all believers are named, is a Man about whom nothing, including his maleness, is incidental, but shot through with cosmic meaning.

In the Scriptures there are no references to men and women together as "sisters" because it is an impossibility of Christian theological anthropology. This is something to which we have referred many times in Touchstone, but I have seen much firsthand evidence that "orthodox" pastors will not teach it for fear of offending the Spirit of the Age and its children. But offended they must be if the Gospel, who is Christ, is to be taught rightly.

A Time for Courage

As a practical matter, it is probably too late to change believers who have in recent generations—granted, in many cases under great pressure—formed egalitarian habits of speech and carry the virus in their altered Bibles, hymnals, and liturgies. But the world has turned and a new age is upon us. Anyone who is paying attention to its movements knows that Christians are going to have to decide to think and act like Christians or not—to cause offense by it or not—and to pay what it costs.

It is time for those who are called to be pastors in the Church of the next age (for God will not stop calling them) to gird up their loins and put an end to the cowardly dalliances of so many of their predecessors in my generation and the one preceding it, owning the Christian faith to be what it is and no longer advancing the bastard offspring of the Spirit of this Age and those who are afraid to trust God by doing battle with it. The seminaries are by and large emasculating theatres full of large smiles and hollow chests, and there is a terrible dearth of orthodox, learned, and courageous shepherds—men who carry and know how to wield their staffs—but there seems to be no lack of hirelings who run when the wolves appear, making wolf-noises as they leave their flocks in the twilight.

Nor do I see how the fight can be fought apart from a new asceticism among all believers, which needs to be intelligently planned—something like what Rod Dreher calls for in The Benedict Option. Not many of the churches of any denomination, as currently constituted, full of the spreading rot, unwilling or unable to fight it, can be expected to cooperate, nor can they be expected as a matter of course to give livings to ministers of a boldly scriptural faith in the face of its enemies. But there are still brethren in the weak and fallen churches—even those that have a name for "orthodoxy," and ways must be found to not abandon them, but feed and strengthen them for the Last Days.