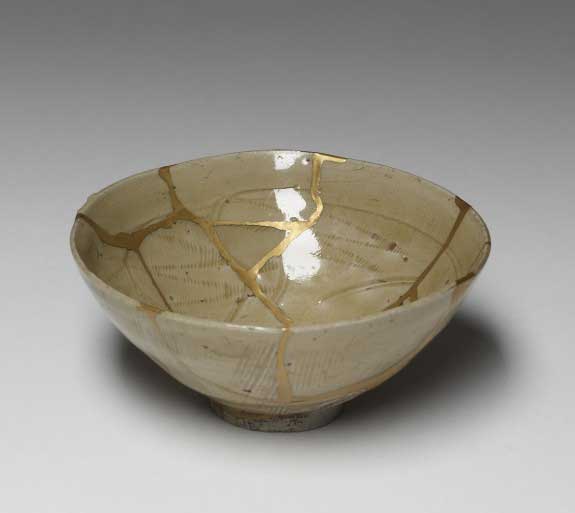 This stoneware bowl is the first work of non-Western art examined here to date. It is small, measuring only 2-and-7/16 inches high by 5-and-3/16 inches in diameter. It is simple in shape, decorated with small areas of parallel lines impressed in the clay, and covered with a translucent brownish-green celadon glaze. It is a modest piece, but it boasts considerable antiquity, dating from tenth-century China.

The bowl did not survive the centuries unscathed, but at some point was broken and mended. We can deduce that, by that point, the bowl had traveled to Japan, where the method of mending broken ceramics with lacquer and precious metals, known as kintsugi, was invented and practiced. Kintsugi did not appear until around the end of the sixteenth century, so by the time of its inception, this bowl would already have been six centuries old, and presumably a treasure, revered and thought worthy of the most careful restoration.

Notice that the mends do not conform to our modern notion of restoration, in which the breaks are made invisible and the piece returned, as closely as possible, to its original appearance. With kintsugi, the breaks are made more visible. Sometimes the shards are even filed down so that the join is made larger to make the filled crack more esthetically pleasing.

The actual mend is made by a laborious process of applying and curing urushi, the highly allergenic sap of the Toxicodendron tree, in order to make the bowl usable and safe for food. The last application of lacquer is usually mixed with some precious metal, such as copper, bronze, silver, platinum, or, in this case, gold. The breaks are made visible as a part of the object's individual history, its uniqueness, and the gold makes the object more precious and beautiful than it was before its breakage. It is restored to usefulness, but in an elevated state.

The word kintsugi literally means "golden joinery," but the word tsugi implies a handing on, a joining of the generations: the broken object has been carefully stewarded and can be handed on. This bowl was conserved in Japan until the late nineteenth century, when it was acquired by one of the founders of the Walters Art Museum, a connoisseur of Asian ceramics and, clearly, of kintsugi.

Beauty in the Imperfect

Kintsugi is closely tied to the quasi-religious Japanese tea ceremony and thus to Zen Buddhism. Buddhism, and tea, came to Japan in the ninth century, and the tea ceremony was introduced as a ritual of purity, simplicity, and humility. Over the years, it took on a life of its own and became a symbol of status and wealth, but in the fifteenth century, shortly before the introduction of kintsugi, the tea ceremony was reformed and brought closer to its original roots.

According to one origin story, kintsugi was invented to mend a treasured tea bowl accidentally dropped by a servant during an important tea ceremony at the court of the powerful sixteenth-century samurai Hideyoshi. When Hideyoshi threatened the pageboy with death, one of the guests turned aside his wrath, and the tea bowl was restored to a more valuable state than before; through an act of mercy, kintsugi was born.

In many ways, kintsugi is a metaphor for, or perhaps more accurately an expression of, key concepts of Zen. First of all, it expresses the principle of wabi-sabi, the recognition and appreciation of the beauty in the imperfect, the flawed, the asymmetrical: all are a part of life and are to be treasured. Out of that flows the concept of mushin, literally "no mind," the detached acceptance of change, fate, and imperfection as inescapable aspects of human existence. Breakage, brokenness, and repair are all simply a part of the life of the object, which becomes all the more valued for them. And beyond thatcomes mono no aware, awareness, compassion, and mercy towards the things outside oneself.

The tea bowl itself is by nature imperfect and fragile, and when inevitably it is dropped, it breaks and is no longer usable. The kintsugi master views it with compassion, and through his art restores it to a state of usefulness and gives it a greater uniqueness, beauty, and value than it had before. Its existence continues but is now enhanced. O happy fault! Through the breakage, the bowl has become more beautiful than it was before.

A Metaphor for Grace

Such a metaphor has a universal appeal. Indeed, one scholar remarks, rather sourly, "Kintsugi has been used extensively (some might even say promiscuously) in art, pop culture, literature, music, psychology and spiritual healing." Undoubtedly, some of these metaphorical comparisons are superficial or even silly, but for Christians, the concept of kintsugi can express profound truths. In his brilliant Art + Faith: A Theology of Making, the Japanese-American artist Makoto Fujimura finds a parallel between kintsugi and the Christian story of redemption and grace.

Mankind is fallen, and we are all broken. Through the redemptive sacrifice of Christ, however, we are restored and become a part of the New Creation. Like the Byzantine painter who uses gold to represent the uncreated Light, Fujimura sees the kintsugi master's golden lacquer as a metaphor for the grace that restores our brokenness and shines through us. The Psalmist sees himself as a broken vessel until he puts himself in the hands of God. The broken pieces remain, an important part of our history, just as Christ's wounds remain in his resurrected Body. But now the whole is transformed by grace, and made more valuable and beautiful than before. Once again we have been restored to usefulness, and by virtue of the gold, have become a part of the New Creation. Fujimura's book goes on to expand this insight into a deep exploration of the spiritual aspects of the artist's creative work, and it deserves a great deal more attention than I am able to give it here.