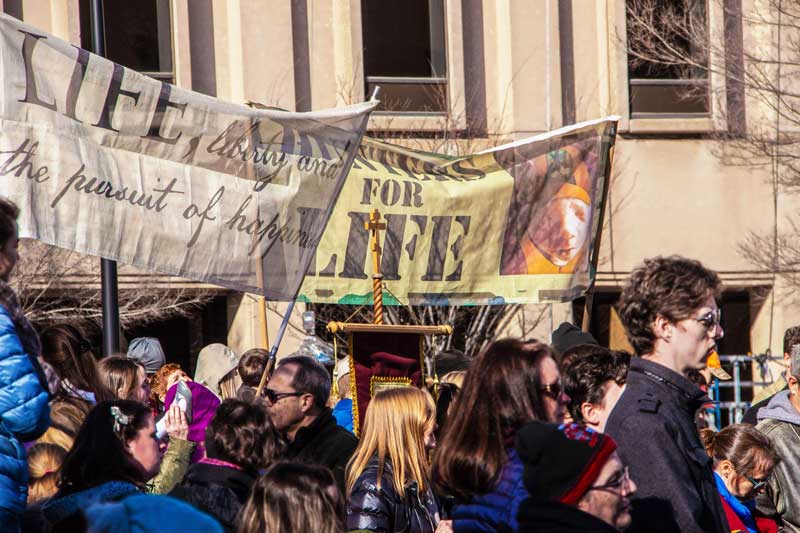 Touchstone & the "Devout" Friends of Abortion
by S. M. Hutchens

Because institutional mores change with the times, it is necessary to repeat with reasonable frequency, for those who are concerned with them, precisely what those mores are. This is why a number of organizations find it necessary to demand that each of their representatives periodically sign a statement reaffirming their full acceptance of the institution's beliefs. Refusal or inability to make such affirmations is a presumptive sign that changes have in fact been made and that those who have made them do not wish to be found out. The U.S. elections of 2020 instituted a change of mind and method in the upper regions of government, the effects of which President Biden is presently confirming by means of executive orders, with the promise of many more to come.

Concurrently, we believe, it is time for Touchstone to re-affirm, with force, something we have all believed from the beginning of our life together: that the deliberate abortion of a human being at any time between conception and the moment of birth is homicide—a crime against humanity, an egregious sin against God, and a breach of the Commandment against murder, inevitably resulting, if there is no repentance, in the penalties, individual and collective, temporal and eternal, against the shedding of innocent blood, an abomination that God hates (Prov. 6:17). There are no mitigating factors that make the thing itself anything less. No one officially associated with this journal believes anything different.

One trusts this is clear enough. The events of the day call for our repeating it, however, for now the United States has a President who is being widely lauded as a "devout Catholic" who is not only devoted to supporting a woman's right to kill her children, but who leads a party intent on securing it in a federal statute in place of a constitutionally vulnerable Supreme Court decision. The other reason we must repeat this conviction from time to time is that all of us come from segments of the Church in which opposition to abortion is questioned or opposed, and we need to state against abortion advocates who are taken to be authorities in the larger segments of Christendom to which we belong (Catholic, Protestant, and Orthodox) that we identify them as wolves and false prophets and stand against them.

President Biden is, to be sure, some kind of Catholic, as the Jewish atheist is some kind of Jew, or the anarchist who wishes to destroy his country is some kind of citizen, or the theologian who teaches in the name of Christ while denying his deity and his Resurrection is some kind of Christian, or the cancerous cell is some part of the body it is killing. If possession of some kind of religious sensibility, even an intense sensibility, is the proper mark of devotion, then perhaps one cannot even deny that Biden, Speaker Pelosi, and Catholics like them are "devout." But this does not stop them from being very bad Catholics, servants of God in the same way Satan is, or bloody-minded enemies of the Church of which they are officially members in good standing, and which is replete with bishops who have no qualms about offering them Communion.

In response to the abortion-favoring policies of President Biden, Cardinal Gerhard Müller, former prefect of the Congregation for the Doctrine of the Faith—the Vatican curial department responsible for supervising the teaching of Catholic doctrine—wrote:

When the politico-religious rulers of their time wanted to forbid the apostles from proclaiming the teachings of Christ under threat of punishment, the apostles replied, "One must obey God rather than men" (Acts 5:29). . . . Those who -relativize the clear commitment to the sanctity of every human life on the basis of political preferences with tactical games and sophistical obfuscations [taktischen Spielen und sophistischen Verschleierungen] openly oppose the Catholic faith.

"Sophistical obfuscations"—like "devout Catholic." What Cardinal Müller says for the believing segment of the Catholic Church is the same for any form of faith that is credibly called "Christian," including, please God, that of this journal. On the abortion of a living child, a matter of mere Christianity, we remain as we have always been, but likely now more than ever, when faced with such devotion as Mr. Biden's, under threat of punishment. Pray for us that our faith does not fail, and we continue to help our readers escape the religion of Antichrist, whose followers perpetually confuse religiosity with goodness.