See That You Are Not Alarmed? by Douglas Farrow

On Flight & Fight in the Present Tribulation
by Douglas Farrow

Fight or flight? That can be a paralyzing and, as such, fatal question. Should we not always be fighting, fighting the good fight of faith? And should we not always be prepared to flee, if the fleeing is strategic rather than cowardly? Our Lord, in the same discourse, said both "See that you are not alarmed, for this is not yet the end," and "When you see the abomination that brings desolation, flee to the hills and pray that your flight not be in winter!" 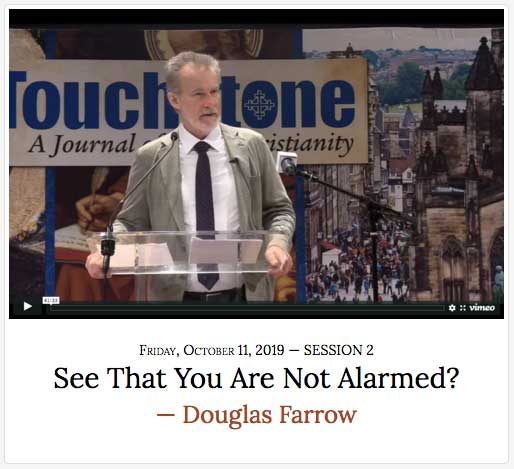 The first piece of advice comes as a warning against premature flight, flight that is not strategic. Strategic flight is fine. For example: Jesus removing himself from angry mobs in his home territory. Or Paul going over the wall in a basket to escape plots against him in Damascus, or fleeing Thessalonica in mid-mission to avoid consequences that might have put an early end to his mission. This is flight, all right, but it is flight as fight.

And here we might consider also less dramatic forms of flight that count, strategically, as fight. Perhaps you recall Genesis 26?

And Isaac sowed in that land, and reaped in the same year a hundredfold. The Lord blessed him, and the man became rich, and gained more and more until he became very wealthy. He had possessions of flocks and herds, and a great household, so that the Philistines envied him. . . . And Abimelech said to Isaac, "Go away from us; for you are much mightier than we."

So Isaac departed . . . and encamped in the valley of Gerar and dwelt there. And Isaac dug again the wells of water which had been dug in the days of Abraham his father; for the Philistines had stopped them after the death of Abraham. . . . But when Isaac's servants dug in the valley and found there a well of springing water, the herdsmen of Gerar quarrelled with Isaac's herdsmen, saying, "The water is ours." So he called the name of the well Esek, because they contended with him. Then they dug another well, and they quarrelled over that also; so he called its name Sitnah. And he moved from there and dug another well, and over that they did not quarrel; so he called its name Rehoboth, saying, "For now the Lord has made room for us, and we shall be fruitful in the land." (12–22)

Esek, contention; Sitnah, enmity; Rehoboth, broad places—Lebensraum, if we may use that tainted term, room to keep on sowing, watering, reaping, being fruitful.

For the most part, I think that is what we should presently be about: digging Rehoboth, carving out space to be fruitful. We invented public education, not only in the monastic schools of Europe in the Middle Ages but here in North America under the likes of Bishop Laval. We invented hospices and then hospitals, and spread them throughout the land. And what has happened to all this? Colonized by the state and, just so, by today's culture of sex and death through manipulation of and by the state.

Esek and Sitnah! In our schools, children are taught by foolish and perverted people to become foolish and perverted, if indeed they are taught anything at all. In our hospitals, "Do no harm" is no longer medicine's first principle or even an operative principle. In our hospices, death is no longer natural but more and more frequently an act of suicide or murder. We cannot go on this way, subjecting the most vulnerable members of our community to the Destroyer and his minions. We should fight for these institutions where there is, in God, hope of victory. But I think we must also be about the equally demanding business of moving on from what has been confiscated, digging new wells in education and in medicine, making new places where truth may flourish and life be respected from cradle to grave.

Where We Must Fight

Douglas Farrow is Professor of Theology and Ethics at McGill University in Montreal. His recent books include Ascension Theology, Desiring a Better Country, Theological Negotiations, and 1 & 2 Thessalonians in the Brazos Theological Commentary on the Bible.