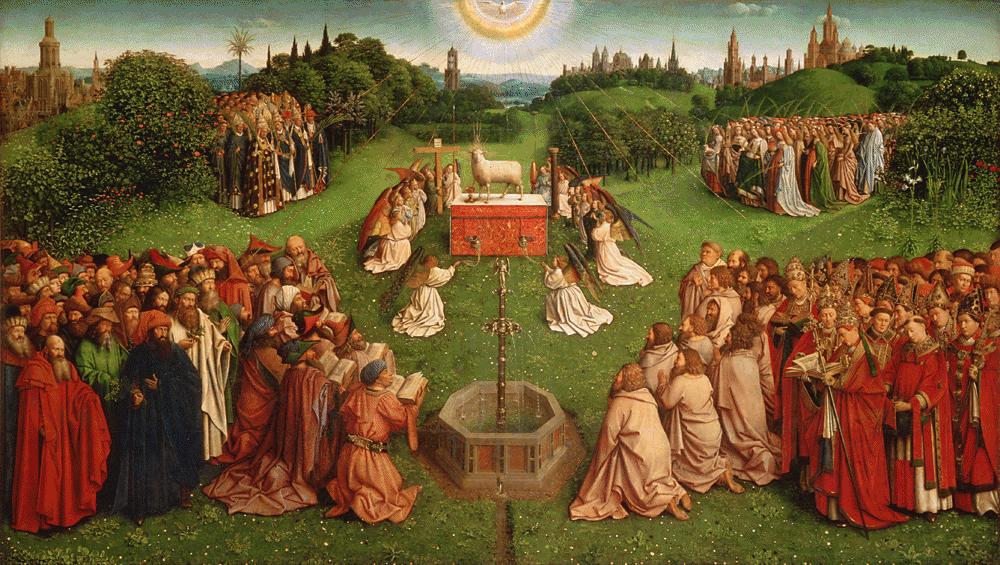 In this, the third installment on the Ghent Altarpiece, we open the final set of doors and reveal the last of the mysteries. As before, we will begin with the who and the where, and then proceed to the what and the why. Here we have a cast of nearly thousands, moving through a continuous landscape across the five panels, which together measure well over fifteen feet across.

The outer left panel represents the Just Judges; this panel is a reconstruction of the panel that was stolen and never recovered. It is an unusual subject for such an altarpiece, and may have been requested by the patron, Jodocus Vijd, who was an alderman in Ghent. The third and fourth judges are thought to be portraits of the painters. To its right, the inner left-hand wing shows the Warriors of Christ.

In the central piece, two groups converge on a fountain: on the left, prophets, patriarchs and pagan philosophers (including the figure of Virgil in white), and on the right, apostles and martyrs. In the middle ground stands an altar, slightly elevated on a little hill, and on it stands the Lamb, pouring out his sacrificial blood into a chalice. Kneeling angels surround him. Above on the left, male saints and martyrs make their way along a wooded path towards the altar, and on the right, female saints emerge onto a flowery meadow.

The inner right wing depicts the Holy Hermits, with Mary Magdalene bringing up the rear; in the outer wing are the Holy Pilgrims, led by a giant St. Christopher.

It is safe to assume that we are in the heavenly realm, and that these are the towers and spires of the City of God stretched across the horizon. Plants from all over the known world spring up to attest to the goodness of creation; there is a particularly lush palm tree behind St. Christopher. The light here, at least in the central panel, falls from the Holy Spirit in the form of a radiant dove, and casts no shadows. This is the Heavenly Jerusalem, which, according to the Apocalypse, is to come at the end of time; it is a vision of the future, and of eternity. At the same time, Jerusalem signifies the Church per se, the timeless home of all believers, the meeting place of the Old and the New Covenants. If the panels we discussed last issue are the New Heaven, into which Adam and Eve are tentatively admitted, then this is the New Earth, where the New Covenant is eternally enacted.

We are, in fact, at the Eternal Mass, the solemn celebration of the liturgy in eternity. In the upper panels, the figure with the face of Christ was vested as if for Mass and wore the crossed stole of the priest celebrant. In the panel below, he is the victim, the sacrificial Lamb who pours out his blood for the redemption of mankind. Behind the Lamb, angels hold the instruments of the Crucifixion, the moment in historical time when this sacrifice was accomplished. Above, the dove of the Spirit descends as at Christ's Baptism, as a validation from the Trinity above.

Below, on the left, the patriarchs and prophets of the old dispensation bear witness to the new. Several of them are reading from their own books, making the Old Testament readings of the liturgy live in themselves. On the right, the apostles and officials of the Church, robed for the liturgy, also participate and witness. Three of the clerics represented, incidentally, are portraits of the popes involved in the fourteenth-century Western Schism, here apparently reconciled.

Between the two groups springs up the Fountain of Living Waters of the Apocalypse, and out of it flows a stream that seems to leave the fictive space of the picture and flow into our own real space in the chapel. An altarpiece always implies an altar below. The stream of living water, of grace, then, would flow directly onto or into the tabernacle in the center of the altar, the resting place for the Eucharistic Host.

In fact, if we look at the fountain and the altar of the Lamb in two dimensions, they take on the shape of a monstrance, with the basin as the base, the golden spire as the stem, and the circle of angels as the orb and rays that surround the Host. Only here, of course, the Host is the Lamb himself, worthy to be slain. It is likely, then, that Jodocus Vijd's chapel was used as the Blessed Sacrament chapel, where the Host was reserved and Exposition and Benediction observed.