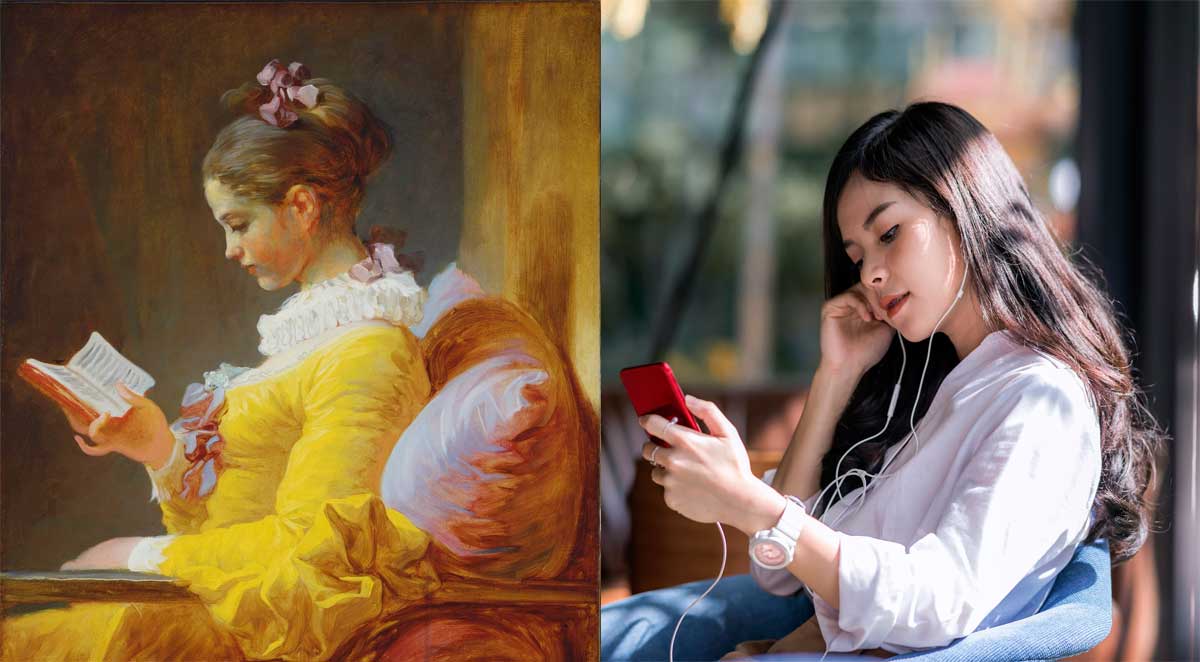 A Girl with a Palantír by Arthur W. Hunt

A Girl with a Palantír

Jean-Honoré Fragonard's A Young Girl Reading (1776) resides in the National Gallery of Art in Washington, D.C., and is perhaps one of the most familiar paintings of a girl reading coming to us from the eighteenth century. When it was painted, America was in revolt and France was on the verge of doing so. Despite the turmoil of her times, here she sits, held captive by a book, reading in silence.

What John Henry Newman Could Learn from Wendell Berry
by D. G. Hart

The Meaning of Classical Education
by Graeme Hunter

One is drawn to the painting by its use of light. The subject wears a saffron dress and is illuminated by the light from an unseen window. A marshmallow pillow supports her back, and her bourgeois bearing is furthered evidenced by a free pinkie finger. Not entirely typical of the playful Rococo style, this is a more reserved Fragonard, who is now taken up with family life. The subject could be any housemaster's daughter. What she is reading we do not know—a playbook, Voltaire, Rousseau? Nevertheless, the fact that she is reading is significant. Her medieval counterpart could not read, for her sort—schooled, trained in arts and manners, literate—did not exist in Europe until the sixteenth century.

The information environment existing in 1776 gave us people with "typographical minds." Neil Postman contends in Amusing Ourselves to Death that the early American mind was shaped by the habit of reading. Having sprung from the sovereignty of the printing press, the typographical mind possessed "a sophisticated ability to think conceptually, deductively and sequentially; a high valuation of reason and order; an abhorrence of contradiction; a large capacity for detachment and objectivity; and a tolerance for delayed response." Newspapers, pamphlets, sermons, and books constituted the reading material for Americans. The founders were aware that a literate, informed, and engaged public would safeguard the country against tyranny. "I should mean that every man should receive those papers," wrote Thomas Jefferson in 1787, referring to newspapers free from government control, adding, "and be capable of reading them."

There is a wonderful painting depicting Benjamin Franklin's print shop just prior to the War of Independence. A middle-aged Franklin stands on the steps of his Philadelphia shop in conversation with a patron. A female figure, apparently the patron's wife, is bent over, reading the contents of an open book. The illustrator has captured a remarkable truth about the times: women of the mid-eighteenth century were bookworms as much as their male counterparts. Higher education may not have been an option for them, but many received what Jefferson insisted upon, a rudimentary education for proper citizenship.

To think that John Quincy Adams received a U.S. Congressional diplomatic appointment to the court of Catherine the Great at the ripe old age of fourteen makes one wonder what sort of education children in 1776 were receiving. Certainly Adams's education was elitist in the truest sense of the word, but George Washington obtained his education in a little schoolhouse in the middle of a tobacco field. Abraham Lincoln obtained his education essentially the same way, with borrowed teachers and borrowed books. Like so many frontier youth, Lincoln read and reread the limited number of books he could get his hands on: Aesop, the Bible, Bunyan, Defoe, Franklin, and Shakespeare. This seemed sufficient to him for a career in law, and one has to assume that it was, and not only for the bench, but for the White House as well, and for those crowds assembled at the fields of Gettysburg.

Fragonard's girl with book in hand might have received a formal education at school, but more likely she was tutored at home. When Jefferson arrived in Paris in 1784, he put both his daughters in a convent school. He had heard about the cavaliering women of the Salon, no doubt from John Adams, among others. The bellicose Adams would later confess to Jefferson, "I have such a consciousness of Inferiority to them that I can scarcely speak in their presence. . . . Very few of these Ladies have ever had the condescention to allow me to talk." The first time, apparently, Adams was speechless, it was in front of this educated company of women.

If Fragonard's painting apprehends the ideal as imagined by French-speaking families, then one must ask, Who is this girl? I would suggest that she is a portrait of civility, intelligence, and virtue. In her, a suitor would find refinement and the embodiment of what was best about French culture, such as it was prior to the American Revolution. Her depiction is not, however, isolated to the tastes of Paris. She would be the ideal in Philadelphia as well. No doubt there existed a hundred like her within a mile of Franklin's print shop.

Arthur W. Hunt III is a former professor of public speaking at the University of Tennesse at Martin. He is now preparing to transition to ministry-related service and lives in the greater Memphis area.