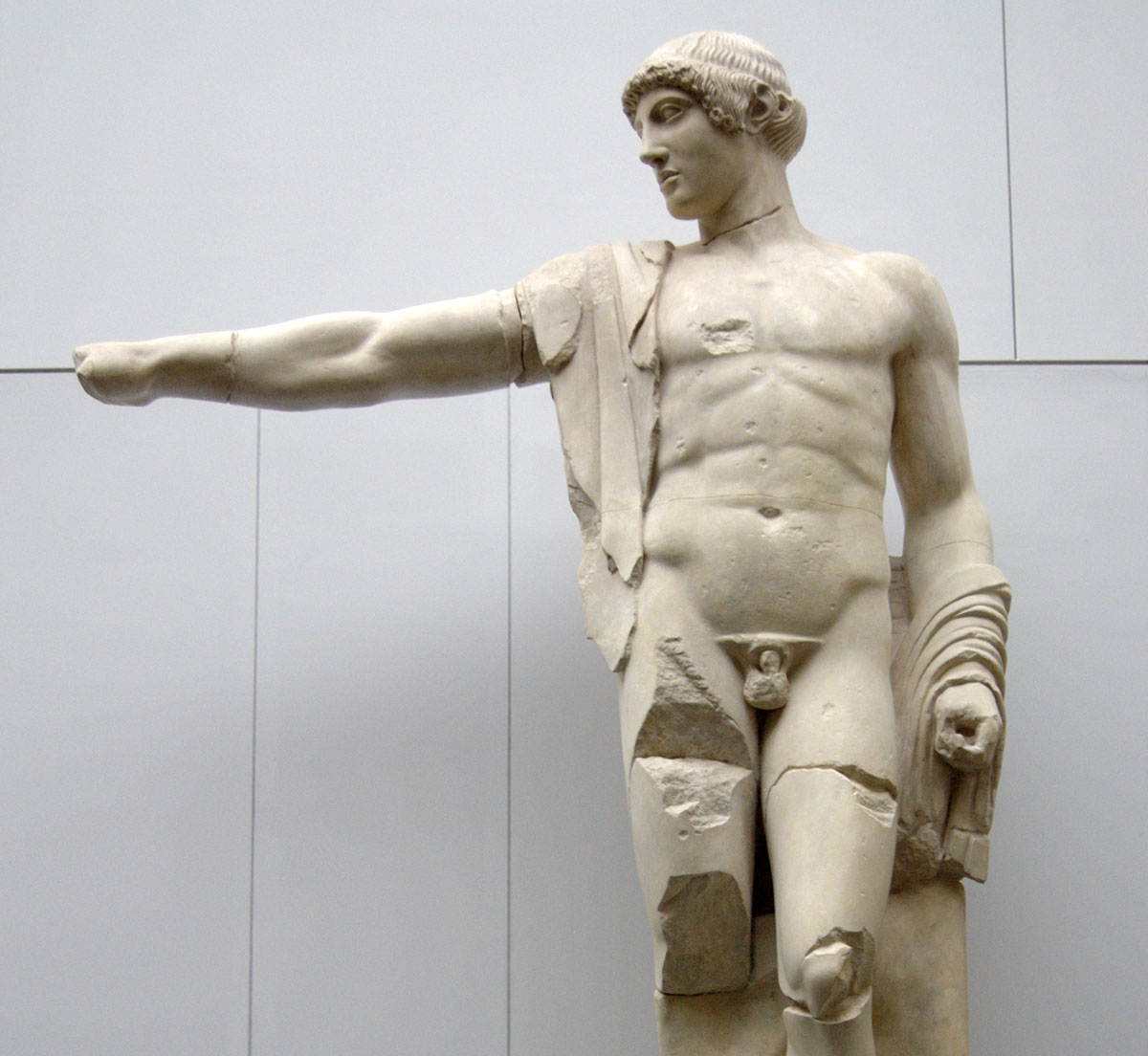 Patrick Henry Reardon on the Divine Gift of Truth

I was less than half my present age when I first surveyed the famous image of Apollo at Olympia. Housed there, in modern times, in the archaeological museum, this sculpture originally adorned the west pediment (triangular upper section of the wall) of the Temple of Zeus. It is among the most instructive art works I have ever contemplated.

I picture the worshipers at Olympia walking around to the west side of the temple, at eventide, to gaze at this heroic image of the sun god, as he stood in solemn majesty to face the setting sun. Here they beheld Apollo's white figure slowly turn to rose and honey in the glow of the twilight—"thy western halls of gold," as Keats put it.

Clustered around the feet of Apollo, in this image, and a fraction of his size, the Lapiths of Thessaly do battle with the offensive Centaurs, while the sun god himself, standing in the triangle and towering above the scene of turbulence beneath, extends a commanding right arm to impose on chaos the eternal claims of rational order.

This scene, sculpted about 460 b.c., was perhaps inspired by the recent victories—Marathon in 490, Salamis in 480, Plataea in 479—of the "rational" Greeks of the West over the forces of anarchy brought by the Persians from the East. This very theme, after all, was prominent in Greek politics and literature through the next century.

When I described the rational order as something "imposed" in this scene, the participle was chosen deliberately. It is an obvious feature of sculpture that form is enforced; statues are not permitted to grow and expand as they might wish. In all things, but in nothing more than sculpture, rationality requires rationing.

For the Greeks, truth was fixed and determined. It was beyond man's ability to control. Man could discover truth, but he could not make it. It was objective, not subject to human manipulation. Truth could accomplish many things, but it could not change. To know the truth was to know why it must be the truth. Freedom was the last concept the Greeks would ever have associated with truth, and history was the last place they would expect to find it.

Consequently, classical Greek philosophy believed that truth represents an imposition, inasmuch as the truth is one and necessary. It is eternal, unchanging, and utterly monist. Its proper standard is symbolized in trigonometry. Euclid and Pythagoras got it right; there is no wiggle room in a triangle.

Thus, classical philosophy held that whatever was known to be true was true because it had to be true. Lucidity was conveyed by necessity, so that the contours of truth were as stable as the stone shaped by the frame of Apollo. This conviction was arguably Greece's chief contribution to the philosophia perennis.

I left Olympia and continued my trip. A few days later I found myself in a boat tossed about on the Sea of Galilee. The locals told me the waves and wind were normal for the season, but the experience brought to mind an earlier scene on those same waters. That prior episode involved fishermen caught in a sudden storm. As they struggled to maintain control and keep the craft from foundering, they called for help from a friend asleep—who knows how?—on the stern sheets of the boat: "Master save us; we are perishing."

The sleeper woke up and calmly addressed the wind and waves: "All right, gentlemen, if you please, that will be quite enough." And immediately, we are informed, the wind died down and the waves came to a rest.

The similarity between the two scenes—Apollo with the centaurs and Jesus with the storm—serves chiefly to highlight a contrast. It is this: The truth conveyed in the case of Jesus is not "necessary." It is historical and backed up by no explanatory or metaphysical necessity. The truth in Christ is an absolutely free gift; it is revealed in the experience of grace and election. Its perception relies on no prior theory, logical presupposition, or antecedent principle. The truth revealed in Christ is pure grace; it is truth freely given and freely received.

We know this truth, not because we recognize that it must be true, but because we perceive it to be true. It is intrinsically tautological; there is no necessity that warrants or explains it. The truth revealed in Christ is perceived by faith, in which there is no place for a monist metaphysics or prior justification. From Alpha to Omega, it is all grace.

The stability of this revealed truth depends, not on unchanging, eternal laws, but on the personal fidelity of the one revealed. Indeed, the order imposed on the wind and waves is but an extension of the gracious act that created the wind and waves.

Jesus does not represent the commanding claims of a rational and eternal order; he is, rather, the embodied image of the Father, freely choosing and inviting us to be his children. The oneness of this revealed God is not an inference drawn from syllogistic necessity, but the immediate revelation of the voice that proclaims, "The Father and I are one" and "He who sees me sees the Father." •