Rod Dreher's Live Not by Lies: A Manual for Christian Dissidents reviewed by Hans Boersma

One of the great obstacles Jeremiah faced was his contemporaries' refusal to accept that Babylonian pagans would soon overrun Judah and that its temple worship would end in exile. Jeremiah was a prophet of doom—mocked, scorned, and ignored until it was too late. Rod Dreher is a contemporary Jeremiah.

To be sure, to my knowledge, no American politician has taken upon himself the role of King Jehoiakim by cutting up Dreher's The Benedict Option and tossing it into the fire (cf. Jer. 36). Nor have the book's warning cries landed Dreher in a slimy pit (cf. Jer. 38). Some might even argue that the book's remarkable sales invalidate its thesis: Christians continue to play a key role in American culture. If Christians were to adopt a monastic approach, therefore, they would wilfully blind themselves to their continuing influence on every aspect of life in the United States. 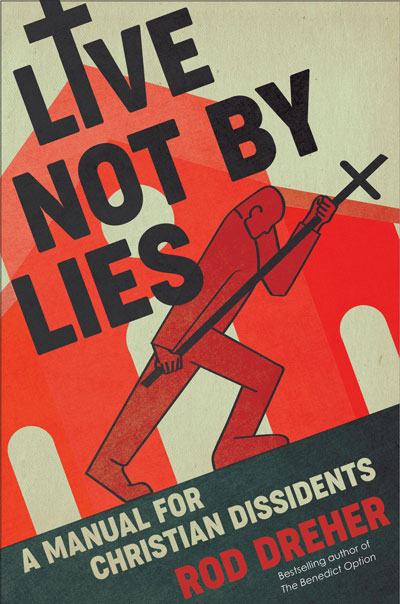 I am not entirely unsympathetic to this criticism, which has been made not only of The Benedict Option but also of its recent sequel, Live Not by Lies: A Manual for Christian Dissidents. Here, Dreher again depicts the dominance of Christian culture as a thing of the past: "The culture war is largely over—and we lost." This is true for Europe and Canada, but I'm not convinced it is fully accurate for the United States. Here, the Secretary of State, Mike Pompeo, is a committed Evangelical; the Attorney General, William Barr, is a staunch Catholic, who presented an impassioned defense of religious liberty at the University of Notre Dame; and the recently appointed Supreme Court Justice Amy Coney Barrett is a devoted charismatic Catholic.

Notwithstanding such counterevidence, when I read Dreher's latest missive, I cannot shake the conviction that he is a true prophet and that the all-too-common pooh-poohing of his warnings and the ridiculing of the advice contained in his latest "manual" are grounded in a serious miscalculation. In fact, the cold shoulder that Dreher regularly experiences, including from top-notch Evangelical and Catholic scholars, may be among the most telling signals that he is correct in observing that Western culture (including many Christians) no longer has the inner resilience or fortitude to resist the barbarians who—as Alasdair MacIntyre has rightly insisted—have made their way inside the gates and are ready to impose their totalitarian regime upon us all.

Dreher's latest book takes the form of a lengthy comparison between the current cultural moment in America and the communist takeover and domination of the former Soviet Union and Eastern Europe. Like a present-day Alexis de Tocqueville, Dreher has crossed the Atlantic (though in the opposite direction) to see what lessons there are to learn from Eastern Europe's extended fling with communism and from the oppression suffered under its totalitarian regimes. Live Not by Lies is the outcome of numerous interviews, careful observation, and Dreher's own background philosophical reading.

Dreher does not make the mistake of simply superimposing the former Soviet Union's situation directly upon today's America, as if the two were identical. Though warning Americans of the rising tide of totalitarianism, he makes clear that

it won't look like the USSR's. It's not establishing itself through "hard" means like armed revolution, or enforcing itself with gulags. Rather, it exercises control, at least initially, in soft forms. This totalitarianism is therapeutic. It masks its hatred of dissenters from its utopian ideology in the guise of helping and healing.

A book review cannot do justice to the main strength of Dreher's account, namely his interaction with those who resisted—people such as Fr. Tomislav Kolaković, Václav and Kamila Benda, Alexander Ogorodnikov, and others. Their horrific first-hand tales make it impossible to ignore what they have to say about the fatigue of the West in the face of its current challenges. Ever the investigative journalist, Dreher's sympathetic engagement with his overseas interlocutors draws from them incredulous observations about the dangers of "surveillance capitalism":

Hans Boersma is the Saint Benedict Servants of Christ Professor in Ascetical Theology at Nashotah House Theological Seminary. He is a senior editor of Touchstone.