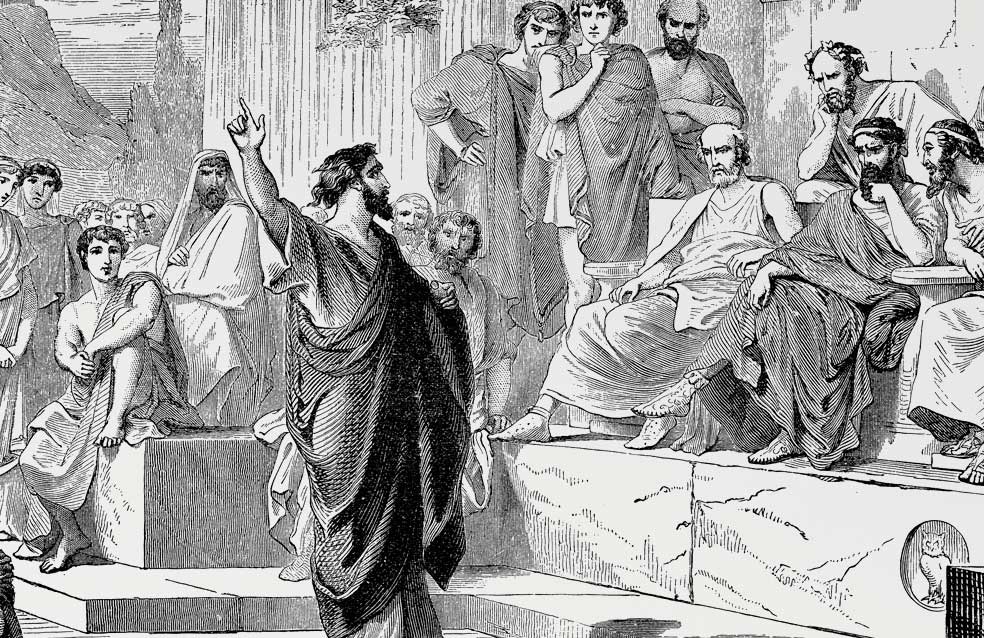 Gospel Out of Reach by S. M. Hutchens

Gospel Out of Reach

Why “Apologetics” Is So Often Wrong
by S. M. Hutchens

In 1 Peter 3:15 we are admonished always to be “prepared to give an apo-logia to anyone who calls you to account—asks for a logos—for the hope that is within you.” It would seem this explaining is what St. Paul was doing on the Areopagus (Acts 17:16f), and that if he modified his method among the Corinthians, he was, even given his negative judgment on apology in “lofty words or wisdom,” doing the same thing in Corinth. Clearly he was concerned that someone’s faith, responding to preaching such as he delivered in Athens, might arise from, and so be fatally based upon, an appeal to the taste of the hearer rather than the power of God—the unadorned gospel being scandal or folly to the dispositions of both Jew and Greek.

But we have, I believe, been given the Areopagus discourse as apostolic preaching—as a good apology—right along with the admonition in 1 Corinthians 2 about the dangers of what the apostle feared he might have been doing in Athens.

Departing from the Gospel

To the mind of Paul as given to the Corinthians, the gospel of Christ, fully delivered in all its offense and promise, was sufficient in itself to save those who were being saved: it was its own apology. That is central to the negative observations made by Barth and others on apologetics, that is, apologetics as science and method in explanation.

It is not science and method themselves that are condemned, but the likelihood of the explanation’s friendly departure from the difficult and offensive gospel to form an attractive paracletic structure that has more apparent solidity and comprehensibility than the gospel itself, upon which the gospel, now the inferior organ, can lean for definition and support. Now the explanation, the template for which is human invention, has in fact become the gospel, and so the wisdom of men rather than the power of God, unable to save its hearers.

In this departure of apology from gospel, good help is all that is ever intended. But the end, if not the beginning, of all such departures is “another gospel,” with the offense, foolishness, and difficulty abstracted according to the tastes of the apologete and his audience. This is the significance—and, it must be said, the evangelical root—of Schleiermacher’s Speeches on Religion to the Cultured Among Its Despisers, and all liberal theology thereafter.

The inspiration of all such evangelists, and the builder of the forum in which they operate, is the prejudices of succeeding intellectual cultures. The gospel so exposed necessarily over time loses all definition, all integrity, all shape, all power. It in effect eventuates to Nothing, when in its original form it is “the Gospel of Jesus Christ,” the genitive being both objective and subjective: it is Something in the highest form to which man can apply, the Word and the Son of the Eternal God. There is a Spirit for whom, we have been told, this loss is an entirely satisfactory -result.

The original intentions are distinctly conservative; the first movement of apologetics in the destructive sense arises among generous people of orthodox disposition. But the temptation into which the desire for “relevance” to the un-gospeled puts them is all too often the way of apostasy. Its depatrification in our day, for example, for the advantage of those who claim inability to relate to God as Father, comes to mind, following in the train of its desanguination for those offended by sacrificial blood, its democratization for those bothered by monarchy, its de-Trinitizing for the morbid logicians of every age since the Nicene, its accommodation of pagan religion, and “sensitive” responses to any number of other embarrassments by those who want to win others to the “Jesus” of their imaginations or get them into a “Church” intra quam salus non est.

One might speculate that this is why all evangelicalisms, all “gospelisms,” of apologetic character, seem so very likely to surrender the evangel to the Spirit of the Age, while their countervailing fundamentalisms, more willing to recognize and bear its offense than those for whom an apologetic attitude is a pre-requisite, remain Christian. This is not a merely Protestant phenomenon. The pursuit of relevance among Catholics has provided a place in that Communion for much that is not only un-Catholic, but un-Christian.