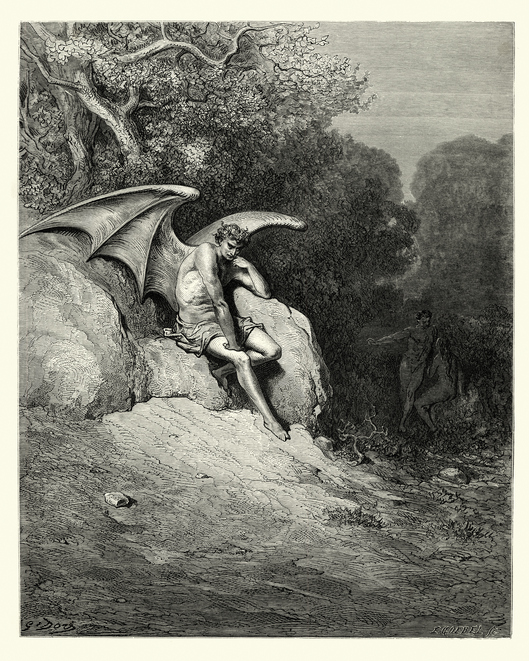 Suppose John Milton had asked himself, as he began writing Paradise Lost, “How would a person think who could do the kinds of things Satan has done? What view of the world could get a person to live that way?” If he had set himself just these questions, he could hardly have portrayed the answer in the philosophy of Satan more profoundly than he did.

Satan is not “unreasoning energy,” as one famous scholar put it. He reasons consistently and well, but perversely. And, as we will see, prophetically: His metaphysics and ethics, as they are generated by his epistemology, anticipate with stunning clarity late modernist and postmodernist thinking.

In three diabolical statements, Milton reveals the inexorable logic that explains why Satan did the kinds of things he did, and also the logic that would justify Satan’s actions to anyone who accepted his initial premise, or would condemn them for anyone who rejected it. These are statements that we hear, in different forms, today.

The Mind Its Own Place

The first words we hear from Satan record his shock at the contrast between the place where he finds himself and the place from which he has been expelled. Before he recovers enough to start putting his spin on the situation, he contrasts Hell’s “mournful gloom” with Heaven’s “celestial light,” its “horrors” most profound with “happy Fields/ Where Joy forever dwells.” Not to be deterred by anything so mundane as reality, Satan quickly turns to his rhetorical skills to salvage the situation, dramatically exhorting Hell to receive its new Possessor.

Possessor? To get the full effect, one must imagine an inmate just tossed into the Tower of London making this audacious speech while the Beefeaters roll their eyes and make significant gestures toward their heads as they pocket the keys, and hear Satan’s futile “Here at least we shall be free” echoing forlornly in the Tower’s hollow chambers. As Charles Williams said, “Hell is always inaccurate.”

Satan realizes that he needs to justify this defiance of reality, so he cuts quickly to the very foundation of the entire diabolical doctrine. His mind, he boasts, is not subject to change by so paltry a thing as place: “The mind is its own place, and in itself/ Can make a Heav’n of Hell, a Hell of Heav’n.” This is the first statement of the diabolical logic.

This claim is as philosophically audacious as the inmate’s claim to be the Tower’s new “owner” is legally absurd. Although Satan grudgingly admits that God has proven himself sovereign, and that this sovereignty includes the authority to “dispose and bid/ What shall be right,” he would have it that this situation only “now” obtains. Milton would have expected his readers to recognize in those words the centripetal force of Satan’s spin cycle.

Christian faith defines the Good as that which corresponds, not to God’s bare will, but to his will as the expression of his character, which is inherently good. Even Calvin, who is sometimes accused of teaching a bare voluntarism, held in the Institutes that God’s purpose in creation was “to manifest his perfections in the whole structure of the universe,” and “if it be asked what cause induced him to create all things at first, and now inclines him to preserve them, we shall find that there could be no other cause than his own goodness.”

If God is the creator portrayed in Genesis, it makes no sense to speak of good or evil except in relation to him. Satan’s claim thus denies God’s claim to be God. For if God created the world, the mind is not its own place; it is, like every other place, God’s place. God has already determined what is good, and for the mind to strike off in a different direction is both a perverse and a doomed enterprise.