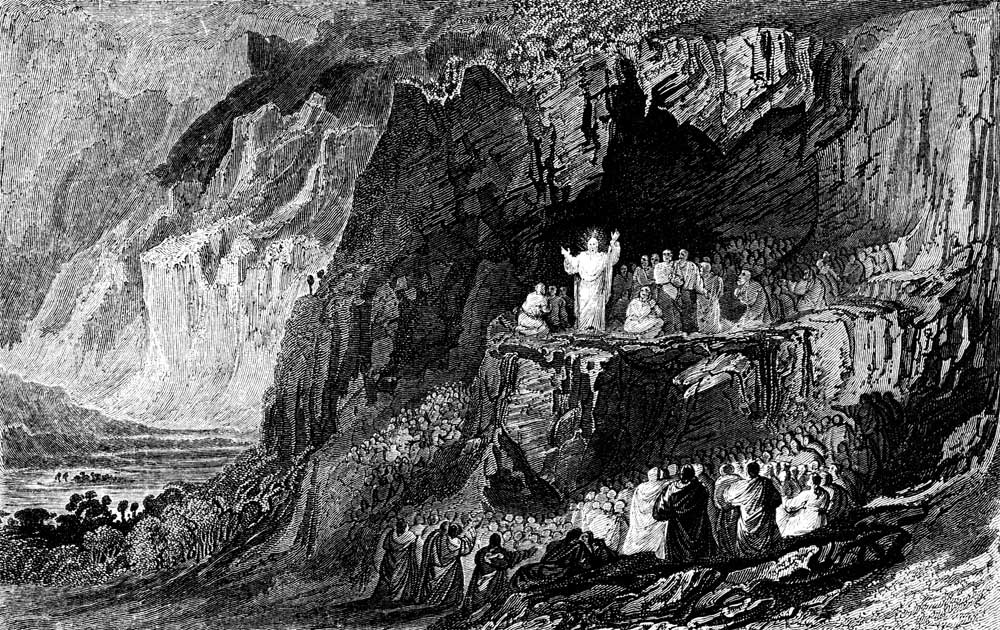 On Turning the Cheek & Giving the Cloak by S. M. Hutchens

On Turning the Cheek & Giving the Cloak

Compare the following readings, the first from the Sermon on the Mount in the fifth chapter of Matthew, the second an account of our Lord’s confrontation with the pious citizens of Nazareth in the fourth chapter of Luke:

You have heard that it was said, “An eye for an eye and a tooth for a tooth.” But I say to you, do not resist one who is evil: If anyone strikes you on the right cheek, turn the other to him also. And if anyone would sue you and take your coat, let him have your cloak as well. And if anyone forces you to go one mile with him, go two. Give to him who begs from you, and do not refuse him who would borrow from you . . . . Love your enemies, for if you love only those who love you, what merit is that? . . . Be perfect, as your heavenly Father is perfect. (Matt. 5:38-42, 46, 48)

Jesus came to Nazareth, where he was brought up; and he went to the synagogue on the Sabbath day, as was his custom. . . . And he said, “No prophet is accepted by his own people. . . . There were many lepers in Israel during Elisha’s time, but the only one healed was Naaman—a Syrian.” The people in the synagogue were enraged when they heard this. They took him out to the brow of the hill upon which their city was built so they could throw him down. But he passed through the crowd, and went his way. (Luke 4:16, 24, 27-30)

Do our Lord’s actions in Nazareth measure up to the daunting moral canon he laid down in the Sermon on the Mount?

Examples of this sort could be multiplied; this is not the only time the Lord resisted people (or spirits) of evil intent. What are we to make of it? Did he fail to live up to his own principles? Did his ethics become more rigorous somewhere along the way? Did he lay down a law that even he could not reasonably expect to keep? These are opinions one can read in certain kinds of books. But how should Christians see it?

The most common mistake made by earnest believers in interpreting the Sermon on the Mount is the failure to take our Lord’s own life and ministry as the authoritative commentary on what it means and how it is to be put into practice. I chuckle when I think of all the preachers I have heard trying to help us squirm out from under what we find here. It is ironic while they are trying to relieve us of the burden of taking these admonitions literally, the only thing that keeps us from being put into hell this very minute is that God himself takes them exactly as they read.

Things become clearer if we can manage to stop thinking of the commands to turn the other cheek, and so forth, in fear of the advantage bad or pathologically dependent people would take of us if we did, and instead place ourselves where we belong in the scenario. We, you see, are the enemies, from whom he could extract eyes, teeth and everything else, and yet doesn’t. We are the ones who have demanded his coat, and received his cloak a well. We are the ones who beg from him, and who are not refused; we are the ones who ask him to go a mile with us, and then find (frequently to our annoyance) that he has decided to accompany us two. If we would be like him, we must do the same for others.

Those who attempt to divert this ethic to a future kingdom age, when it would be less ruinous to those who try it, have got it exactly wrong, for it was meant for times in which men are still at enmity with God and each other. This is what everyday charity looks like in the face of sin, not what it shall look like when evil is subdued. No, we cannot get out from under the Sermon on the Mount—unless we wish to wriggle out from under the mercies of God. We can only seek to understand it better and enter it with more of our faculties engaged. If we are afraid that being like God will kill us, we are right, it will. That is exactly what we who profess to follow Jesus have been promised. What we seek in understanding the Sermon on the Mount is not exemption from death, but greater skill in dying.

The real problem is not in the dying itself—we shall all do that; in fact, we are doing it right now—but that we must die as well and intelligently as we can, with all our faculties engaged. And more than that: As we go down into the waters, we must drag as many with us as we can, for we are not only in the business of dying ourselves, but of killing others. This is part of the symbolism of baptism, in which one Christian reaches up and pulls another down into the waters under which he is already disappearing.

There is a sense in which Tacitus was right when he said that Christians were the enemies of the human race (if this is indeed how the famous passage from the Annals is to be translated), for, being the friends of the race as it shall be, we are the enemies of the race as it is. Tacitus was a narrow man, and he thought of perfected humanity in terms of an old Roman ideal that was nearly gone by his time. He was right in holding to the concept of an ideal man. But he did not see that the only ones who could restore the good he loved were those who not only hated, as he did, what humanity had become, but who also were doing all they could to kill it in a Christian way, using their own bodies as torches to illuminate the Empire—as if what Christ had said about not resisting evil were taken literally.

more on Bible from the online archives