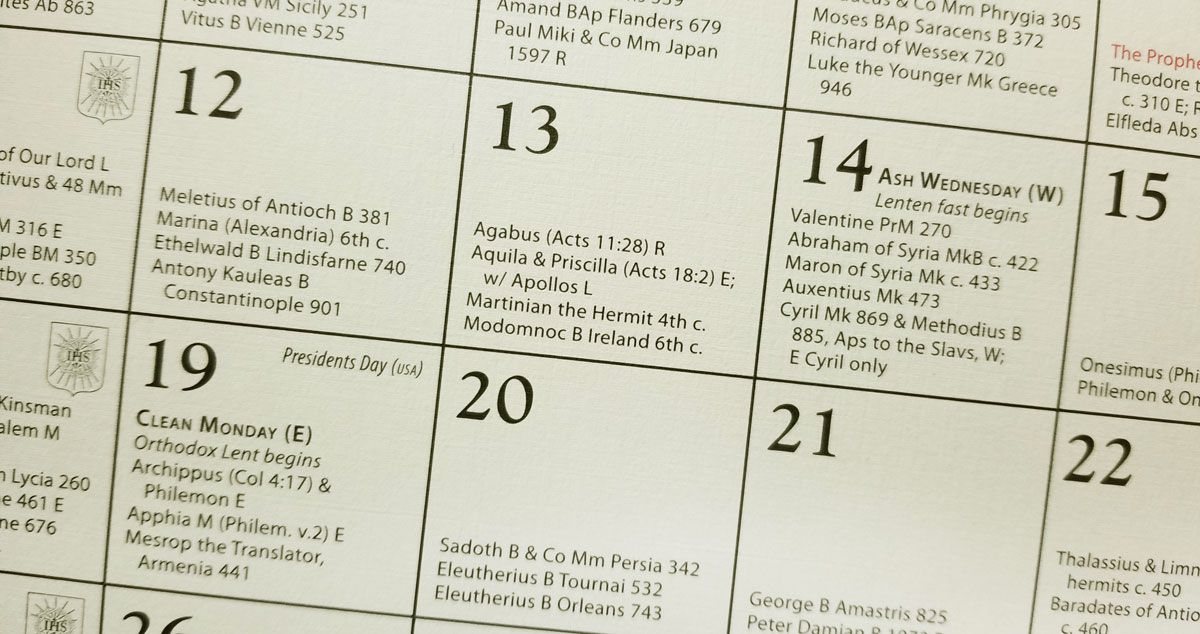 The Making of Lent by William J. Tighe

The Making
of Lent

On the Origins of the (More or Less) Forty-Day Fast by William J. Tighe

What is Lent and what is its purpose in the Christian year? Most Christians would probably give an answer along these lines: It is a 40-day period of fasting and ascetic effort—or at least of heightened religious awareness—by which Christians prepare for the annual celebration of Christ’s passion, death, and Resurrection in Holy Week and Easter. Others might add that it is also a time when converts are prepared for their baptism or reception into the Church at Easter. And a few more might say that it is the Church’s corporate imitation of Christ’s 40-day fast in the wilderness after his baptism by John in the Jordan.

The Greatest Drama Ever

Fast & See That the Lord Is Good
by Anthony Esolen

Life in the Fast Lane

How to Fight for the Body While Forgetting About Ourselves
by Adam A. J. DeVille

In fact, Lent is all three of these things, but it appears to have originated, in Egypt, exclusively as the third of these, and originally to have had no connection with the Lord’s passing through death to life. But before pursuing its origins, let’s do some backtracking.

In the West, among Catholics and Protestants alike, Lent will begin on Ash Wednesday, February 17, and end on Maundy Thursday, April 1. It is followed by the Holy Triduum of Good Friday, Holy Saturday, and Easter Sunday (April 2, 3, and 4). Sundays are not observed as fast days, so reckoning Lent as extending from Ash Wednesday to Maundy Thursday gives 38 days of fasting, to which the adding of Good Friday and Holy Saturday makes 40.

In the East, among both the Orthodox and Catholics of the Byzantine tradition, Lent, or the Great Fast, will begin after vespers on Sunday, February 14, and end on Friday, March 26, a period of 40 continuous fast days (with a slight relaxation on Sundays and on the feast of the Annunciation, March 25). It will be followed by two days outside the fasting season, Lazarus Saturday, March 27, and Palm Sunday, March 28, after which comes the separate fast of Great and Holy Week, running from Vespers on Sunday, March 28, to the great Paschal service of Matins and the Divine Liturgy in the night of Saturday–Sunday, April 3–4, which ends it.

In the West, Ash Wednesday and the immediately following Thursday, Friday, and Saturday were added to the beginning of Lent in the seventh century, when a concern arose with observing “40 fasting days” as opposed to “a fasting period of 40 continuous days, not all of which are observed with the same stringency.” Before that, Lent in Rome began a full week later than in Constantinople, on what was once known as Quadragesima Sunday, a Sunday anciently known in the West as Dominica in Capite Jejunii, the Sunday at the Head of Fasting. This is still the beginning of Lent in the Archdiocese of Milan and parts of adjacent dioceses, where the Ambrosian Rite (dating from the fourth century) is observed.

In both East and West, Lent was, for Christians, a period of ascetical preparation for the annual observance of the Lord’s “Passover” from death to life in Holy Week, and, for catechumens, a period of instruction and penitential asceticism leading up to their Paschal baptism. But now a curious difference between West and East comes into sight.

more on lent from the online archives