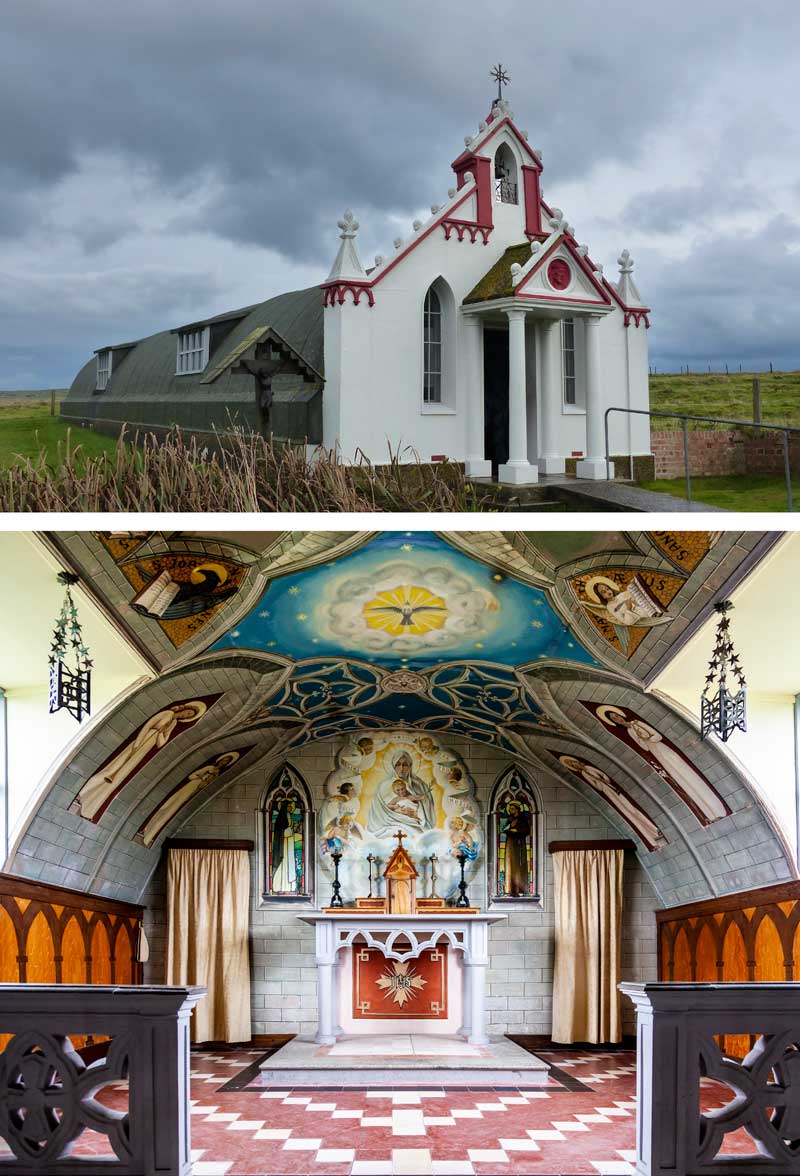 The Italian Chapel by Clara Sarrocco

In February 1941, the Italian Tenth Army was defeated by the British in the Battle of Beda Fomm in North Africa, and thousands of Italian troops were taken prisoner. They were treated very poorly in captivity. Coupled with the intense heat, there was a lack of food and water. Rumors about the prisoners' fate abounded, with India being spoken of as possibly their final destination.

Meanwhile, far to the north, a German U-boat under the command of Gunther Prien slipped undetected into Scapa Flow, a natural bay created by several of the larger Orkney Islands, and torpedoed the British battleship HMS Royal Oak, killing 834 British sailors. Following this disaster, Winston Churchill, then the First Lord of the Admiralty, called for barriers to be built in the channels between four of the southern islands to protect the bulk of the British naval fleet anchored in the Flow.

The task was formidable. Materials had to be brought into the remote area. The slabs of stone and concrete that would be dropped into the water to form the barriers had to be salt-waterproof. Engineers and oceanographers had to calculate the movements of the tides, among other things. But most difficult of all, perhaps, was getting and keeping laborers for the massive job. Most able-bodied young British men were in the military, and it was hard to recruit others to a desolate area where the weather was unpredictable, the far north's patterns of daylight and darkness played havoc with men's body clocks, and the living conditions in the Nissen huts (also known as Quonset huts) were primitive at best.

Clara Sarrocco is the longtime secretary of The New York C. S. Lewis Society. She has taught classes on C. S. Lewis at the Institute for Religious Studies at St. Joseph's Seminary and is the president of the Long Island Chapter of University Faculty for Life. Her articles and reviews have appeared in numerous publications, including Touchstone, New Oxford Review, Gilbert, The Chesterton Review, St. Austin's Review, and The International Philosophical Quarterly.