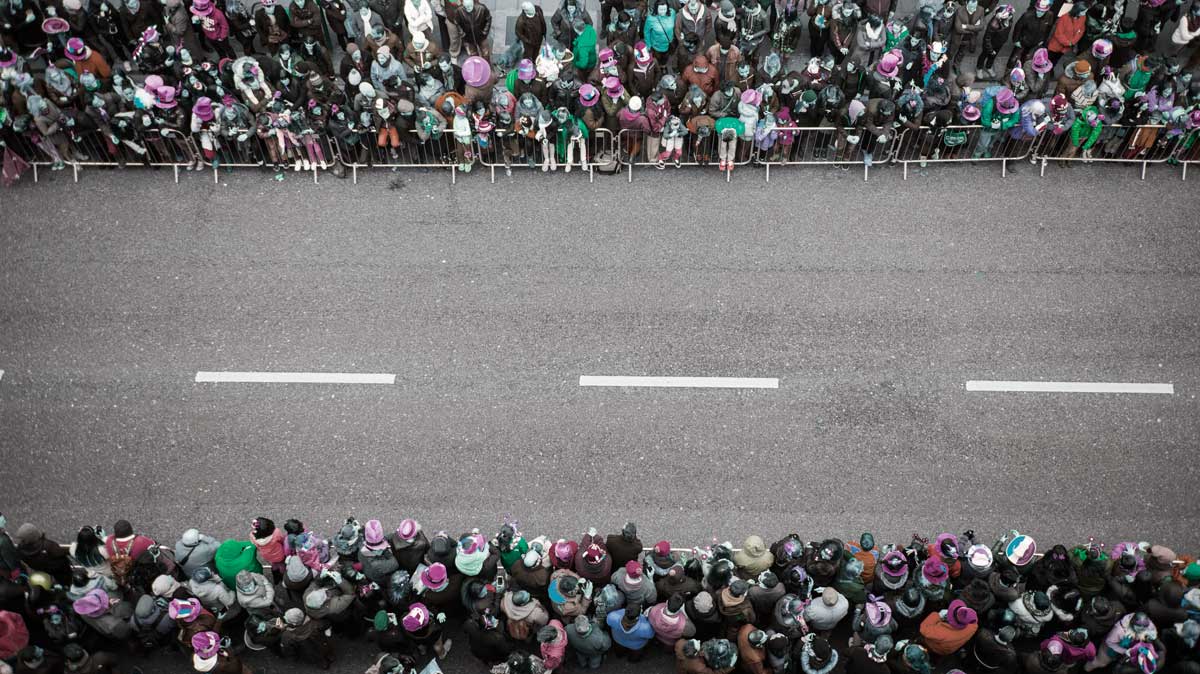 By Their Parades Ye Shall Know Them by Anthony Esolen

By Their Parades Ye Shall Know Them

The Gods & Worship of Athens, Rome & Toronto
by Anthony Esolen

Back in the year 415 B.C., the Greeks of Athens woke one day to find that their sacred herms had been vandalized. A herm was an odd thing, a small statue essentially made up of a bust of the god Hermes and a protruding phallus. The god was portrayed with a beard, not as the beardless youth of the Olympian pantheon. That suggests that the religious impulse behind these statues—used for milestones and boundary markers—came ultimately from the very ancient fertility religion that the Olympians had in part replaced. The connection is obvious enough. The phallus is for fertility. When the god has intercourse with the earth, mother of grain and fruit, it must needs be fertile, bringing the harvest without which the worshipers would die.

But some drunken revelers had roamed about Athens and the neighboring villages and knocked the protrusions off the gods, a shocking sacrilege. The blame was laid upon Alcibiades, amoral, narcissistic, and brilliant. The Athenians could not prove that he had been the instigator, but because of their suspicions they made a decision that proved fatal to the city and her empire. Athens was in the middle of her long struggle with the Spartans. Alcibiades had persuaded the Athenians to mount a naval attack on faraway Sicily, friendly to Sparta. What they hoped to gain by this, other than glory, is not clear. The staid and rational general Nicias argued stubbornly against it, but in the heat of Athenian pride and passion he lost the day.

Now, the only man who could have pulled off that victory over Sicily was Alcibiades. But the Athenian assembly, heaping one bad decision upon another, relieved Alcibiades of command and gave charge of the expedition to Nicias. Alcibiades, out for revenge, soon sold his services to Sparta instead. Nicias was an intelligent and courageous soldier, but his very virtues here worked against him. Only a ruthless and reckless demagogue could have returned with victory, and Nicias was not that. The Athenian fleet was demolished.

The Athenians, of course, blamed Nicias and not themselves. Meanwhile, the Spartans took advantage of the turn of events, for the navy had always been Athens' greatest strength. Sicily led inevitably to the terrible coastal battle of Aegospotami, where the Spartans, astonishingly, crushed the remains of the Athenian naval power and imposed terms of surrender. That night there was wailing in Athens, because the people knew that their enemies would pay them back for the wicked things they had done when they were riding the high imperial wave. The gods delay; they do not forget.

But Greek religion was not merely a spree of sex and nature worship. Quite the contrary. By their monuments and parades ye shall know them. Sculpted upon the pediment of the temple of Zeus at Olympia, and upon the metopes above the columns of the Parthenon in Athens, was the iconic battle between the Lapiths and the Centaurs. The Lapiths were men who had unadvisedly invited some Centaurs to a wedding feast. Everyone knows that a centaur is half man, half horse, but what we don't want to think of is that every man is half man, half centaur. The lower half of us is ever wont to rise up in rebellion against the upper half. The belly, allied with regions south, wants to have its way despite what the head advises. Indeed, the belly would corrupt reason, turning it into an instrument for procuring what the belly wants: food, drink, sex, bloodshed, and other delights.

So the centaurs are at the feast, they get drunk, which is no surprise, and try to rape the bride, which is a surprise but shouldn't be. The feast erupts into bloodshed. Which side was victorious? In a sense, neither. The god was victorious. The god Apollo, Olympian of light, of ordered song and intelligence and cunning, is portrayed at the center of the scene, descending to put an end to the violence, his arm extended in command. What does it mean? Man is the glory, jest, and riddle of the world, but he can—it is not certain that he will—so order his passions as to make him like the god. He can—it is not certain that he will—impose order upon the passions of a people, so that their city will resemble Olympus, and not a scene of lust and destruction.

That hope lay at the heart of the most famous of the Athenian festivals, in honor of the ambiguous god Dionysus, the god of wine and revelry, the god whom it is most unwise to belittle or ignore. The problem of civilization may be expressed thus: "What shall we do about Dionysus?" We find attempts at answering that question in the mighty plays of the tragedians Aeschylus, Sophocles, and Euripides. Will the house of Atreus continue in its coils of revenge, blood, and self-destruction, or can law and the straight judgment of impartial men return it to humanity? Must the suffering of Oedipus end in meaningless death, or is there something mysteriously redemptive in it, bringing a blessing to those who welcome the accursed man? Will the boy-ruler Pentheus learn to recognize that his supposedly dispassionate rationalism is a dangerous illusion—before he is torn to pieces in spirit and body both?

Let's leave Greece for a moment and turn to another paradigmatic feast. The year is 1300, and thousands of pilgrims have flocked to Rome for the jubilee declared by Pope Boniface VIII. They sing hymns. They make the rounds of the chief churches of Rome, not as tourists but as participants in a citywide liturgy. When they reach St. John Lateran, they climb the steps on their knees as they pray. They go to St. Mary Major and behold the glorious stories of the faith portrayed in red and blue and green and gold mosaic in the dome above the apse. They meet travelers from the Holy Land, palmieri in Italian, palmers in English, carrying branches such as were laid before Jesus as he rode into Jerusalem upon the colt of an ass, on the Sunday before he was crucified. Those travelers had put their lives on the line—such travel was never really safe, what with storm and plague and war. They walked the rugged path that Jesus walked up to the Skull Place, carrying his cross. They kissed the tomb where he was laid to rest, and whence he rose on the morning of the third day.