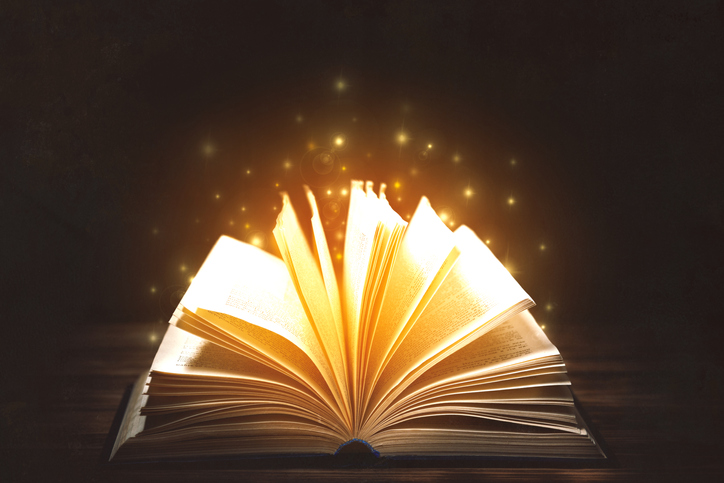 That's the Welsh translation contemporaneous with our King James Version. I can't yet read Welsh fluently, so that although I "know" what the words mean, I have to reacquire the knowledge piecemeal, puzzling out word by word what the translator was puzzling out, word by word, from the Greek.

The experience has highlighted for me a few truths about the composition and the reading of these texts that we might miss, we who have word processors and books that are friendly to the eye. Books in the ancient world were far more difficult to write and to read. Things we take for granted, such as clear spaces between words, did not exist.

When Augustine called on Ambrose one day, he found him poring over a book in silence, and was amazed—Ambrose suffered from hoarseness and needed to spare his voice, so he took to reading without sounding out the words. Augustine had never seen anyone do that. For the voice assisted the eye in solving the puzzle of letters and words running into one another.

Writing, too, was laborious, even strenuous, so people used secretaries. Internal evidence shows that St. Paul did not "write" the Letter to the Romans, but dictated it to one Tertius, who reveals himself in a greeting (Rom. 16:22). With the cosmopolitan Paul, fluent in Greek, that wasn't going to matter much, but someone whose Greek was wobbly might have his words partly filtered through the syntax of a secretary.

Along with how something is written, the what comes into play, among people who relied upon memory and mnemonic devices. The poems of Homer include metrical tags—Menelaus of the great war-whoop, Agamemnon the lord of men—and detachable passages inherited from many generations past, from the memory of singers. Beowulf is similar; we have material that's centuries old, and words no longer in use when the composer, a Christian monk, wove everything together (and at enormous expense: a hundred sheep for the parchment).

For a long time, many scholars insisted that Homer's poems were not the work of one man. Others said the same about Beowulf. The dramatic passages—Beowulf bidding farewell to his thanes as he dives into the mere, to seek the lair of Ma Grendel—were too starkly different from the compressed, impersonal account of the Battle at Finnsburh. Ezra Pound grouched that monks had snapped up such splendid "pagan" poems as The Wanderer and The Seafarer and appended lame homilies to them. Others divined two authors of the magnificent Dream of the Rood, whose first half is chock-full of hypermetric lines, muscular and bold, as when the Cross tells of how Jesus came to Calvary:

Then the young Hero ungirt himself; / that was God almighty—
strong, stiff-willed, / and strode to the gallows,
climbed stout-hearted in the sight of many; / intended to set men free.
I trembled when the bold Warrior embraced me, / yet I dared not bend to the earth,
fall to the ground for fear; / to stand fast was my duty.

Too glorious to be the work of the same man who wrote these singsong didactic verses a hundred lines later: