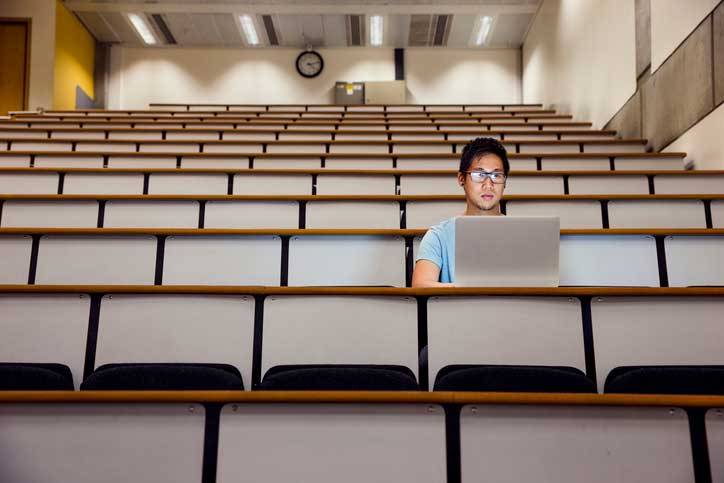 Online courses are by now a familiar feature in higher education; what's new is the hastening to make them a chief ingredient within the entire university recipe. Columnist David Brooks observed in a May 2012 New York Times op-ed that "elite, pace-setting universities have embraced the Internet. Not long ago, online courses were interesting experiments. Now online activity is at the core of how these schools envision their futures."

Even Christian colleges are adopting the online formula. Patrick Henry College allows students to complete up to half of their education online. Liberty University offers 11 associate's degrees, 33 bachelor's degrees, 70 master's degrees, and 10 doctoral degrees—all of which are online.

While online education is convenient for many students and cost-efficient for money-strapped schools, others are concerned about the overall quality of a degree earned solely through an electronic delivery system. Who of us, after all, would want to be operated on by a heart surgeon who earned his medical degree online?

Despite concerns about quality, educators are optimistic about the possibilities of online colleges. Thrun has even claimed that, in the future, there will only need to be ten universities in the world. Imagine having only the best professors on earth streaming their content to anyone who wants to tap in.

Such a situation would, of course, dramatically jeopardize the careers of professors. The tenured professor is already going the way of the dinosaur as universities hire more adjuncts at lower salaries.

Online higher education poses an even greater threat to teacher job security in a globalized economy. Princeton economics professor Alan S. Blinder caused no small stir in 2006 when he warned in Foreign Affairs that the new information-service economy could lead to the outsourcing of American white-collar jobs as easily as it did blue-collar jobs. His prediction echoes Thomas Friedman's gripping line in The World Is Flat: "If it can be digitized, it can be outsourced." Plumbers, electricians, and janitors probably have nothing to worry about, but accountants, computer programmers, and college professors certainly do.

Being There Is Best

Teachers have traditionally shared the physical environment with their students. But when educators are asked, as they increasingly will be, to spend hours in front of a computer screen rather than be with their students corporeally, they are being asked to do something that, until very recently, has not been understood as teaching. What online enthusiasts are really advocating is that we redefine what it means to be a teacher.

Six decades ago, the American writer E. B. White foresaw how our technologies could lead us to forgo what is primary in favor of the secondary and the remote. In One Man's Meat, he said we might one day reach the point where we look into another person's face and see only artifice.

E. M. Forster made a similar prediction as long ago as 1909, in his short story, "The Machine Stops." In this story, all of life is connected to a great Machine. People live underground in individual cells and communicate with each other only through devices that transmit their images and voices. The main character, Vashti, spends her days lecturing to audiences via an electronic plate, on a variety of subjects ranging from the French Revolution to music during the Australian period.

As the story opens, Vashti's son Kuno, not wanting to communicate his most intimate feelings through the Machine, makes a personal request of his mother.

"I want you to come and see me," he tells her from the other side of the planet.

"I can see you," Vashti says, speaking into her plate. "What more do you want?"

What more do you want? The response is cold and implies that artifice is to be preferred to face-to-face interaction.

Bell Telephone use to have a slogan that went, "It's the next best thing to being there." Wonderful as the telephone was, no one assumed it was the best thing. It was still only second-best to "being there."

Most of us still know, at least instinctively, that "being there" corporeally for someone is better than "being there" virtually. What parent would shut a child up in a room, never to see him again, and only communicate with him by texting? Such a parent would be guilty of gross negligence or even child abuse. Yet, increasingly, disincarnate communication is becoming the preferred mode of teaching in higher education.

Christians should understand more than others the primacy of embodied teaching. After all, God must have thought embodiment important; otherwise, St. John would not have said, "That which was from the beginning, which we have heard, which we have seen with our eyes, which we looked upon and have touched with our hands . . . we proclaim also to you" (1 John 1:1,3). The Incarnation of Christ demonstrates how real presence is a requirement of real love.

The early Gnostics questioned the doctrine of the Incarnation because they believed the body was evil. Modern gnosticism makes a similar claim because, as Wendell Berry has pointed out, it looks "upon the body, along with the rest of the natural creation, as intolerably imperfect by mechanical standards."

Not all courses translate equally to an online format. Should tennis be taught online? Should sculpting? Should public speaking? In watching the movie The King's Speech, one is struck by how the king's tutor, Lionel Logue, gave the king exercises to increase his bodily awareness as part of the treatment for correcting his speech impediment. Logue's technique involved exercises for the whole body—legs, arms, back, chest, head, jaw, teeth, and tongue. It is doubtful that the king's lisp could have been addressed adequately through an online course.

Embodied teaching is qualitatively different from, and in scores of situations superior to, remote teaching because students often need to see, hear, and feel what the real thing looks like. Without a flesh-and-blood model, many students do not know what to do.

For example, a professor of public speaking may stand before a student and say, "Louder please. Now get your chin up—like this." The operative principle here is the same as in good parenting: "Emulate me." The virtue of kindness is an abstraction to a little girl until she witnesses her father giving a sincere compliment to her mother. In the same way, a master craftsman shapes his apprentice; the maestro prepares his student for the concert hall; and the science teacher guides his pupil in the lab.

The Lutheran pastor Dietrich Bonhoeffer founded a seminary based on leading a "life together" with his ordinands. He used the corporeal relationship Jesus had with his disciples as the pattern to follow for his own school. He was also convinced that students preparing for the ministry needed to study, sing, and pray together. Online seminaries may have their place—not every seminarian can uproot his family and move across the country—but we should not deceive ourselves into believing that an online education is on a par with real-presence learning.

In the rush to digitize the college classroom, we should remember the sheer power of embodied teaching—that real love is transmitted through real presence.

Arthur W. Hunt III is a former professor of public speaking at the University of Tennesse at Martin. He is now preparing to transition to ministry-related service and lives in the greater Memphis area.