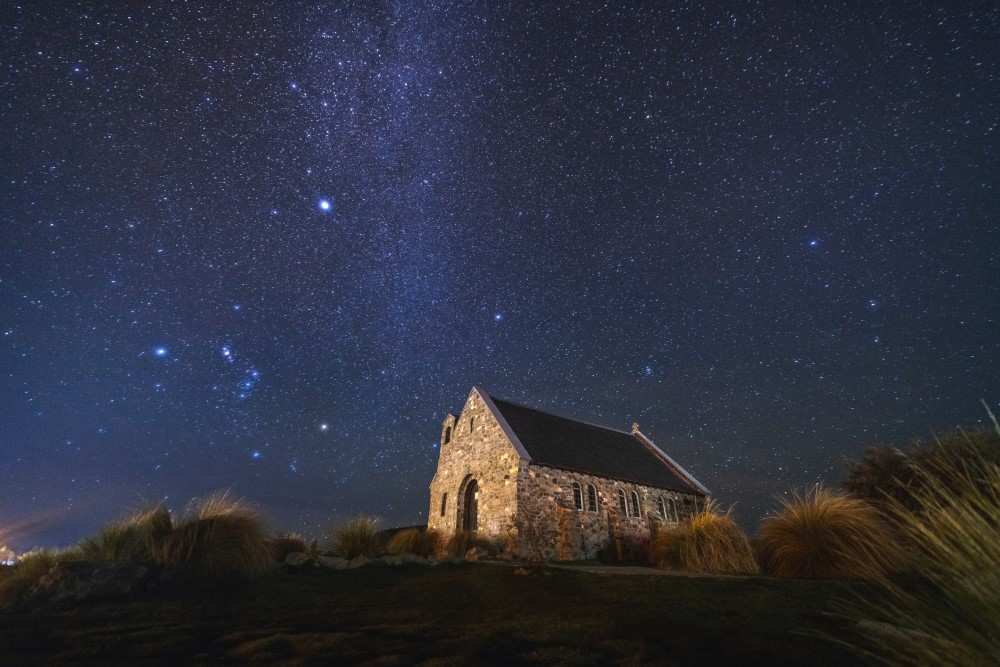 "In the same country," writes St. Luke, "there were shepherds in the fields, keeping watch over their flocks by night." That, of course, is what shepherds have to do. But we should never underestimate the word of God, which is always like that unregarded field where the attentive man found his treasure.

So, in his brilliant (and, what is nearly the same thing, deeply humble) new book on the narratives on the birth and childhood of Christ, Pope Benedict asks us to consider the attitude of those shepherds. They were keeping watch. They were good shepherds. The hireling sleeps, the hireling flees when the wolves approach, but a true shepherd remembers that the young David slew a lion with his hands and his shepherd's staff, and remembers that the Lord, the shepherd, accompanies us into the valley of the shadow of death.

The shepherds thus resemble the old prophet Simeon, who was awaiting the consolation of Israel. They resemble also Anna, who dwelled continually in the temple night and day, serving God with fasting and prayer, and who, when she saw the child Jesus, gave thanks to God and spoke about the child to all who awaited the promised deliverer.

And since there is a harmony between waiting and pondering, they resemble Mary, of whom Luke says more than once that she treasured in her heart words and events that she did not fully understand. Indeed, it is not artistic license but scriptural insight that moved Christian artists to portray Mary, when the angel came to her, as reading, for she who treasured the Word in her womb had first treasured it in her heart. Hence, she could bring to its fulfillment, in her brave song at the threshold of her cousin Elizabeth, the song of Hannah when she bore the boy Samuel, a child destined to be dedicated wholly to the service of God.

It certainly isn't an attitude encouraged by the yearly "Christmas season," with its frenzy of seeking what is not bread, and spending for what fails to satisfy. I don't mean to decry seasonal "commercialism," as if that evil rises up like a winter dragon only to return to its lair until the next Thanksgiving. The whole way of life is futile, and the "season" is its clearest manifestation. Over here, millions of people camping in the cold night in front of a gadgetry store, and over there, shepherds on a hillside, keeping watch over their flocks, Anna and Simeon in the temple, Mary in her quiet room, meditating upon the word of God.

It is as if they did not dwell in the same world, or rather as if the world of Augustus and Tiberius, the "real" world, were but the shallow foreground for the true world of depth and silence, attentiveness and longing, prayer and rejoicing. For there is joy. The shepherds were at first struck with great fear, but the angel said, "Fear not, for I bring you good news of great joy, which shall be to all people." The joy, we see, is great because it is for everyone; as Simeon will call the child Jesus a light to all nations, and Mary will recall the promise God made to Abraham, in whom all nations should be blessed.

What do we do, when we hear tidings of great joy? We do what the shepherds and Mary and Anna did. We make haste. So Mary, hearing of the great deed God had wrought for Elizabeth, "rose up and went in all haste to a town of Judah," and the shepherds went with all haste to Bethlehem, to find the child and to give him homage, and then to go home giving praise and glory to God. They recall also those would-be-Abrahams from the land of the rising sun, who set forth at once when they saw the celestial sign, while the important people in the world, the men who advised Herod, seem not to have taken one step from comfortable Jerusalem.

Here, too, they shed light upon a world that will not hear the good news of the Savior. They were at first quiet and attentive, keeping their watch, holding their place. Simeon and Anna went every day to the temple. Mary pondered things in the stillness of her heart. Yet all these are also men and women of haste, a joyful acceleration of the spirit.