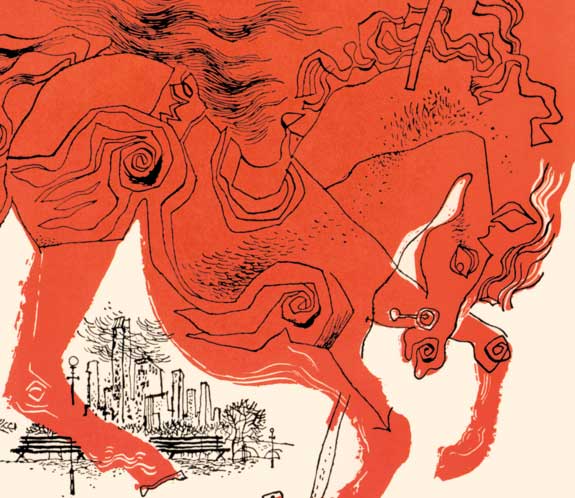 J. D. Salinger's The Catcher in the Rye
by Douglas Jones

“I’m the most terrific liar you ever saw in your life. It’s awful. If I’m on my way to the store to buy a magazine, even, and somebody asks me where I’m going, I’m liable to say I’m going to the opera. It’s terrible.” That voice, that distinctive voice of sixteen-year-old Holden Caulfield, confessing and sinning, tripping and announcing, produced more fictional grandchildren in a short time than any bodily grandfather could.

Holden is now everywhere. Short stories. Stage. Commercials. Novels. Big screen. Home. Every contemporary writer can speak Holden Caulfield, even those who have never read of him. Holden is a dialect. In 1951, the year J. D. Salinger’s The Catcher in the Rye appeared, the literary critic T. M. Longstreth prophesied, “Fortunately, there cannot be many of him yet. But one fears that a book like this given wide circulation may multiply his kind.”

In some ways, that’s a compliment to Salinger: Something he created became pervasive. In another way, it’s an insult: His art is easily imitated. Hemingway and Joyce face the same problem; Shakespeare and Dostoevsky don’t.

So many social factors have to mesh at the right moment for an artwork to dominate a culture like this, for even a brief moment of decades. Salinger’s novel accomplished this by precisely expressing the secular theology of our time, modern gnosticism.

On the surface, Salinger gave us the believable rebelwithoutaclue that teens longed for. Critic Fred Batman said of his first reading at sixteen, “I was simply dazzled. I thought the book had been written especially for me. . . . Holden has also been a personal savior of sorts.” He speaks for many.

Indeed, the novel is usually summarized as a characterization of how Holden is torn between two worlds, the tense transition everyone faces between childhood and adulthood. But in Holden, Salinger unwittingly captured the two paradoxical dogmas of twentieth-century gnosticism: sentimentalism and cynicism, perfectionistic idealism and hostility to common, material life.

For the gnostic, ancient or modern, spirit is the purity that produces a faux childish, spiritual, unearthly innocence, and body is the evil that produces the unspiritual, earthly, practical, civilized, and adult. The twentieth-century gnostic regularly denounces evil and injustice in life because it doesn’t fit his view of Edenic reality, all the while insisting that life is ugly and not worth living. He associates spirit with innocent childhood, body with evil adulthood. Thus, he simultaneously resents and embraces evil. Holden Caulfield is modern gnosticism’s poster boy.

Kicked out of an expensive prep school yet again, and afraid to tell his Manhattan parents, Holden delays his return home by trying to party around town. His voice opens the novel in fine modern style, cutting himself off from the past: “If you really want to hear about it, the first thing you’ll probably want to know is where I was born, and what my lousy childhood was like, and how my parents were occupied . . . but I don’t feel like going into it. . . . In the first place, that stuff bores me.”

And in New York

Douglas Jones is senior editor of Credenda/Agenda magazine (www.credenda.org) and a fellow of philosophy at New St. Andrews College in Moscow, Idaho.