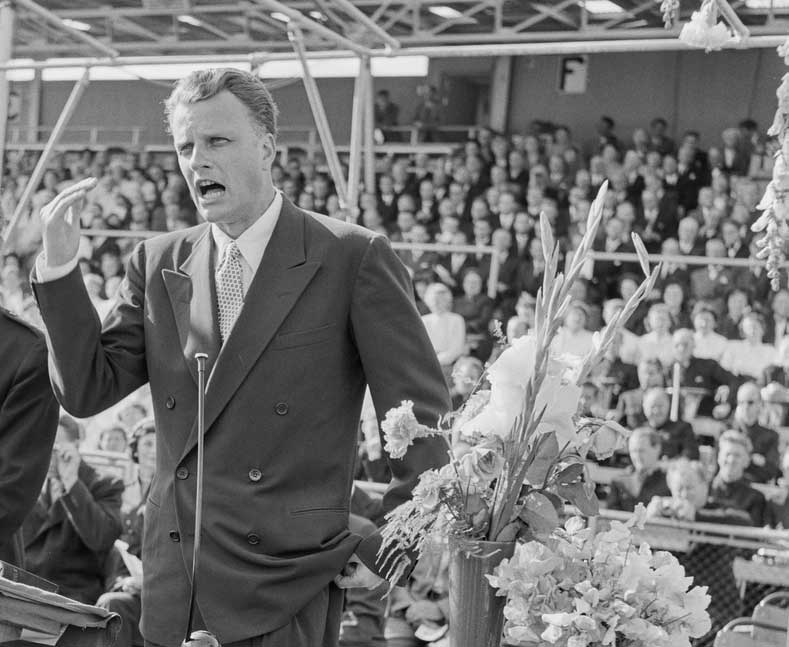 The Genuine Preacher by Robert Hart

What All Clergy Can Learn from Billy Graham
by Robert Hart

Many "televangelists" have a bad name, and many of them have well deserved it. Some are brought down by scandals, while others have no scandals attached to them but come across as clowns, entertainers, or hustlers for money (seeming only to rob churches of the rightful pledges of their members). Still others are trendy, or just plain weird.

In contrast to all these types stands Billy Graham, a figure with a kind of authority that confounds the world's values, even those values that are so often merely the entertainment "performance values" of so many other "celebrity" ministers. Dr. Graham's televised "crusades" were old-fashioned Baptist revival services, and they came across with a simple and profound dignity that others lacked.

They looked honest because they were straightforward. There were no gimmicks, no special offers, no salesmanship, nothing phony, and no evidence whatsoever of the preacher's ego—indeed, Graham was a man who spoke of himself in down-to-earth, humble terms. He was on the air as a clergyman, not as a star; and that made him a star, someone whom millions of people tuned in to watch and to hear. Apart from certain popes, no other Christian clergyman has ever commanded so large an audience.

Graham was an educated man, and it showed. He never made exaggerated claims about his own knowledge, yet he clearly knew what he was talking about on almost any given topic (not just the Bible). It was that same education, which served him so well in public life, that almost prevented his ministry. Early on, he did not want to be known as an evangelist because that designation did not suit the appearance, he thought, of a learned and sophisticated modern man. Only after an inner struggle did he learn to say simply, "the Bible says," and only then did his preaching begin to come across with power.

From 1949 into the 1990s, under the scrutiny of the public eye, Graham stood not only as a man who could preach to large crowds with great effect, but also as a man whose own life, family, and marriage gave validity to his words. We could say many things about his accomplishments: that the largest gathering in human history was one of his crusades in Korea (over one million in attendance), that he preached to more people than any other individual, that he wrote many books, that he started a large organization for evangelism with Christian humanitarian efforts included, and so forth. But if these accomplishments have stood the test of time, it is because Graham himself has been a man of known integrity.

In setting up the Billy Graham Evangelistic Association, he insisted on receiving only a basic salary and remuneration for his expenses. The taint of economic scandal that brought down other men in similar ministries was never even possible under the conditions he had laid out ahead of time. His financial openness and accountability were learned from Reinhold Niebuhr.

He also required that his organization secure his hotel rooms in such a manner that no one could get to him without several witnesses being present, and he stipulated that only open conversations were allowed. Through this policy, he ruled out the possibility of having secret encounters.

Graham was both sincere and humble. He prevented the occasion of sin by creating an organization that bound everyone, including himself, to the rules. He was humble enough to see himself as inherently no better than other men, as a sinner who needed, for his own sake, to remain focused on Jesus Christ.

The result was that his organization held together for several decades, and his life and ministry remained above reproach and effective all that time. The closest he came to anything even resembling a scandal was his mistake in 1972 of endorsing a political candidate (Richard Nixon), a mistake he never repeated. While other men in the world of TV evangelism were falling into pecuniary or sexual sin, and dropping like flies as a result, Graham stood tall as a man known for his integrity. His method for achieving this seems simple: he did not trust in his own holiness, but instead stuck to a set of rules to avoid temptation.