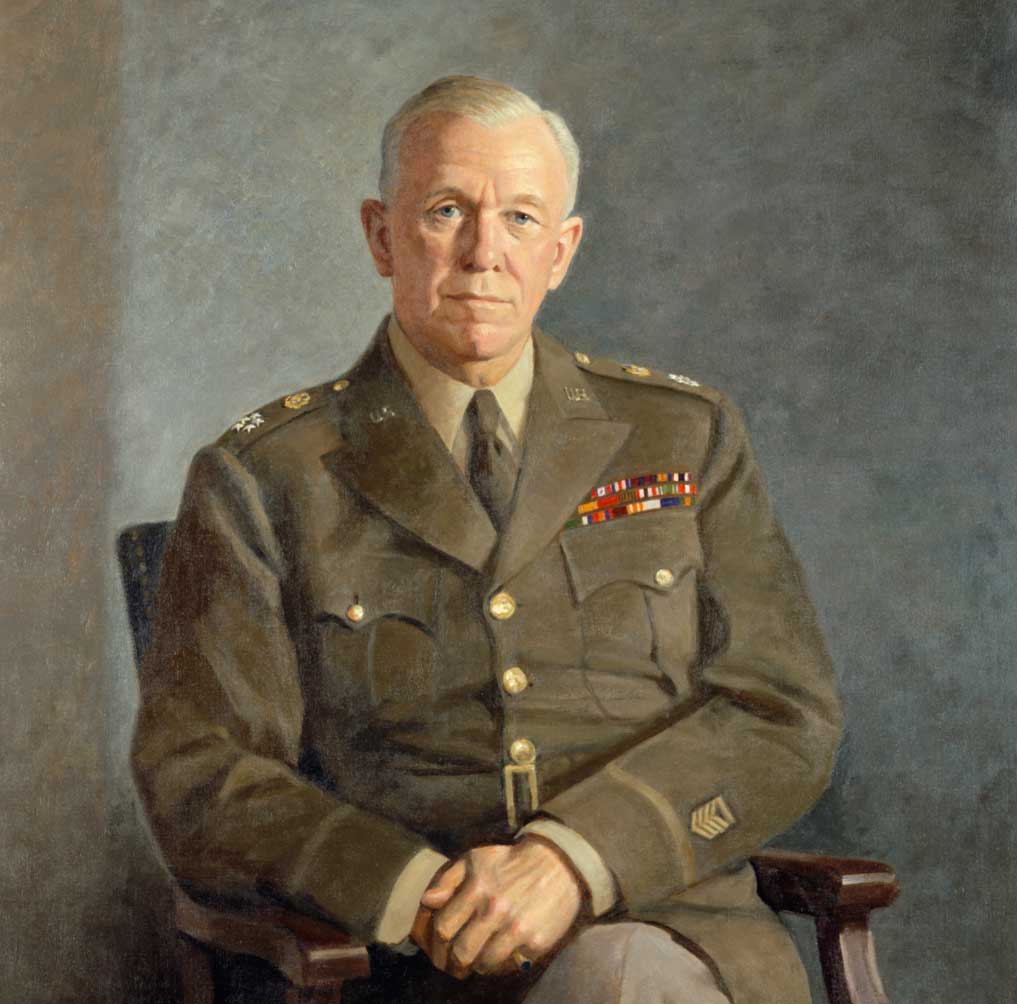 In War for Peace by David Hein

In War for Peace

It's a pity that few American university students know the name or accomplishments of George Catlett Marshall, Jr., a Nobel Peace Prize winner and Time magazine's Man of the Year in 1943. If he is remembered at all, it is only by way of two routes: One set of books and articles focuses on Marshall as a major figure in World War II and a statesman of influence in the immediate

postwar era. Another group of scholars has examined this historical record and distilled from the biography of George Marshall important lessons in principled management.

There are some topics in which interesting debates about Marshall's record can still occur: Pearl Harbor, racial integration in the armed forces, Operation TORCH, a possible cross-Channel invasion a year or two before D-Day, troop training and replacement, battlefield equipment, the atomic bomb, China and Chiang, the recognition of Israel, and MacArthur in Korea. But the Marshall biography is pretty much in place.

What writers have failed to do is to go deeper and ask: What lay beneath Marshall's actions? What were his core beliefs?

We live in an era in which American young people—including almost all the media-saturated students I teach—see religious belief expressed in public action as a baleful thing; therefore, their opinions typically include a blanket endorsement of a stark separation of Christianity and commonwealth.

Within this cultural atmosphere, an exemplar such as George Marshall offers a thought-provoking alternative, indeed a salutary challenge. Not a saint, Marshall was nonetheless a Christian gentleman whose core convictions were threaded all through his ethical leadership. Precisely because his beliefs mattered in the shaping of his vision and in the pursuit of his vocation, a fresh examination of his life is called for at a time when leaders like Marshall are so distinctly out of fashion.

Belief means conviction, an acceptance that certain fundamental things are true and that these realities can be trusted and relied upon. If belief is not absolute intellectual certainty, it at least knows enough to have confidence that its object of faith will return authentic meaning and constant value. More than that, belief entails loyalty. If an entity is worthy of trust, then, as H. Richard Niebuhr and Josiah Royce made clear, believers will be loyal to its cause: their actions will be guided by their commitment to what they believe in. Patriots, for example, not only love their country and believe in its ideals; they will fight for it and, if necessary, die for it.

George Marshall knew the importance of belief. He told Trinity College (Hartford) graduates in June 1941 that "the defense of a Christian nation and Christian values" depends first and foremost not on "things of steel," such as "guns and planes and bomb-sights," nor on "supreme confidence in our ability to conquer and subdue other peoples." More than "enthusiasm," more than "optimism," only "something . . . encompassed by the soul" could be relied upon as the source of the morale, the spirit, which sustains a sure defense. "We are building it [morale] on belief, for it is what men believe that makes them invincible."

What were the interior anchors of George Marshall's life and career? It is an interesting question but not an easy one to answer. Marshall had good friends of many years' standing, but few people knew him well, and his published papers reveal little of the inner man. His principal biographer, Forrest C. Pogue, had trouble interviewing the austere general about his personal life, and so we know less than we'd like to about the human being behind the exterior reserve. But with a little effort, Marshall's core beliefs can be discovered and set out.

David Hein is Professor of Religion and Philosophy at Hood College, in Frederick, Maryland. His many books include C. S. Lewis and Friends: Faith and the Power of Imagination (co-edited with Edward Henderson; SPCK and Cascade) and Archbishop Fisher, 1945-1961: Church, State and World (co-authored with Andrew Chandler; Ashgate). His most recent World War II-related essay is "Vulnerable: HMS Prince of Wales in 1941," in the Journal of Military History (2013).