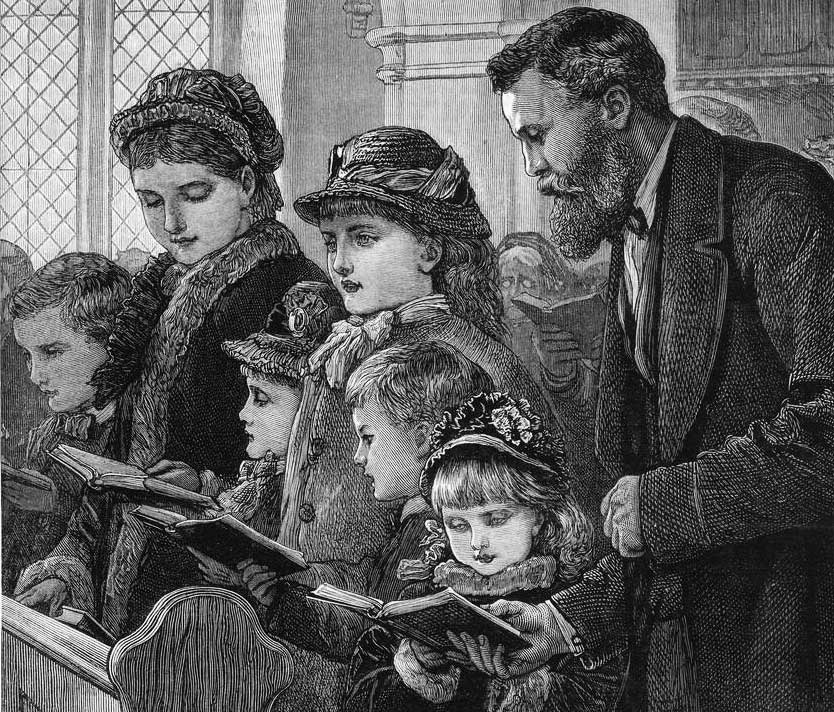 Christian Fidelity vs. the Sterile Conformity of the State
by Allan C. Carlson

Might high fertility, both within a marriage and collectively within a group, be a sign of Christian witness? Many would reply with a shocked "No!" As a common retort from the 1960s had it, "Christianity is not a fertility cult!"
Perhaps so.

Then again, Christianity is the only "world religion" that places the conception and birth of a baby at the vital center of its theology and its understanding of history and time. Among lay Roman Catholics who have married, faithful adherence to church doctrines guiding sexual conduct has long and commonly resulted in an abundance of children. Among Lutherans, the rejection of clerical celibacy led to a new emphasis on the Genesis command, "Be fruitful and multiply." This phrase, according to Martin Luther, "conquers and strikes down as a thunderclap all human traditions and demonic doctrines." Among reformed pastors and their wives, it created an expectation to procreate with a certain exuberance, as examples for their congregations (a story told well in the forthcoming book by church historian Brandt Klawitter, A Forceful and Fruitful Verse). Emerging from a different history, the Orthodox parish priests who have married over the centuries also appear to have been unusually prolific.

Investigations by secular academics into fertility trends have also pointed to the strength or weakness of Christianity as a key variable in demographic change. In American history, the seventeenth-century Christian Commonwealth in New England was notable for its abundance of children. Setting out to create a fit place to raise godly offspring, the early generations of Puritans averaged nine births per couple, with 90 percent of the children surviving to adulthood. According to twentieth-century demographer James Potter, the "natural growth" rate found among these Christians "was extremely unusual, if not unique, in human history."

Writing in 1860, Sarah Josepha Hale—editor of the hugely popular Godey's Lady's Book—praised her fellow Americans for holding true to the Eden Laws created by God and carried to America on the Mayflower: divinely blessed and fruitful marriages and sexual complementarity. "Perhaps no people in modern times," she wrote, "has preserved the habits and feelings of those [Edenic] days more than the Americans." Historical numbers from the first half of the nineteenth century still confirm that judgment.

So while Christianity may not be a fertility cult, Christians often behave as though it is.

However, about the time Mrs. Hale wrote her words, something seemed to be going wrong. Family size began to shrink; children seemed to disappear. The phenomenon appeared first in France, evident by the 1840s. Family size fell from six children per couple down to two or three. The same change soon spread to all other Western lands.

The earliest explanations came from Christian moralists who tied signs of a retreat from religion, such as lower attendance at Mass or Sunday services, to "the French disease." The pioneer Belgian demographer Camille Jacquart, for example, brought a report entitled "Against the Progress of Immorality" to the Catholic Primate of that land, Cardinal Mercier. In turn, the latter issued a pastoral letter to counter "the plague of Onanism." It argued that a once-healthy Christian nation was succumbing to neo-Malthusianism, portending catastrophe.

Protestants, for their part, were also quietly turning to the sin of Onan, beginning with the clergy. Even among Lutheran Church–Missouri Synod pastors, notable for their staunch adherence to the Book of Concord, birth control was spreading. Despite frequent formal church condemnations of this act, the average size of their families fell from 6.5 children per couple in 1890 to 3.7 in 1920.

Some took comfort in the common academic argument that fertility decline was a consequence of the urban-industrial revolution. When factories and offices became the new centers of everyday life, children were no longer useful, as they had been on farms or in artisans' shops. Indeed, homes had become mere "parking places" for people who spent their active hours elsewhere, with children now expensive nuisances. Relative to birth control: the economy made us do it!

However, the most reliable scholarly studies of fertility decline have continued to focus on the religious question. The contemporary Belgian demographer Ron Lesthaeghe concluded in 1977 that secularization is "the most powerful variable at the outset of fertility decline and . . . the one with the longest lasting effect [and] and highest degree of persistence."