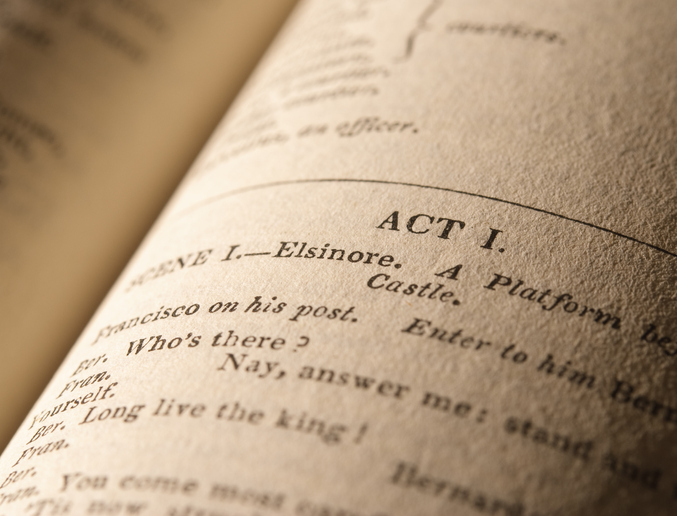 The Art & Craft of Shakespeare by Robin Phillips

The Art & Craft
of Shakespeare

An Interview with Peter Leithart
by Robin Phillips

Over the years Peter Leithart and I have enjoyed discussing various things, from closed communion to postmodern literary theory. With this year being the 450th anniversary of Shakespeare's birth, our discussions turned naturally to the work and legacy of the Elizabethan bard. The interview below represents the majority of our discussions.

Robin Phillips (RP): Many people perceive Shakespeare as a relic of a bygone age. After all, he lived in a time before there were smartphones, internet, even TV. Is Shakespeare even relevant for the type of society we now inhabit?

Peter Leithart (PL): The most obvious riposte comes from the performance history of Shakespeare's plays. They've been adapted for all sorts of situations. Just in the last few years we've seen film adaptations that prove the point: Ian McKellen plays Richard III in pseudo-Nazi uniform; Julie Taymor's Titus Andronicus mixes ancient Roman and Fascist themes; and judging from the weapons and uniforms, Ralph Fiennes's Coriolanus might be fighting in Afghanistan or Kosovo. You can transfer Romeo and Juliet to L.A., turn the warring families into gangs and the swords into guns, and the star-crossed lovers seem like kids down the street.

This Great Stage of Fools

I think that flexibility is partly due to the fact that Shakespeare wrote plays, and wrote them with few scene-setting stage directions. Austen's world is clearly not ours, nor is Dickens's; that leaps off the page. With Shakespeare, we have drama without much in the way of scenery, and even though the characters talk funny, they are recognizable human characters.

And of course there's the old truism that Shakespeare's plays deal with the perennial dramas of human life—war, love, betrayal, ambition, gossip, trickery, death, hope, reunion, mystery and magic. It's a truism, but it's also true.

RP: We know very little about the historical Shakespeare, which means that his plays and poems are really all we have to go on when trying to discern his vision of the world. But do his works even convey a certain vision of the world?

PL: I believe they do. He was (I believe) a Christian playwright in a Christian society, and judging from the plays, it seems he held to the Christian convictions that were widely shared in his world. I don't think we can talk about Shakespeare's "philosophy." I imagine it wasn't as self-conscious as that. Still, though I don't want to reduce him to a pundit, I'm convinced that he self-consciously raised and dramatized certain live theological and political issues. A number of recent studies have emphasized how the Elizabethan stage functioned as a kind of alternative pulpit.

He was also like Cassius, "a keen observer of men." He understood power, had a sense of the complexities of motivation and psychology, grasped and enjoyed the erotic repartee between men and women. One critic has explained the mystery of Hamlet's character by suggesting that Shakespeare meant to make him unfathomable: "What a piece of work is man!" indeed. I think this is what accounts for the centuries of attention to Shakespeare as a "thinker." He was a poet and playwright, a craftsman who wanted to entertain and instruct. But he had such a sure sense of human experience that his work inevitably raises philosophical and theological questions that he may never have thought of in philosophical terms.

RP: What would be an example of some of these questions?