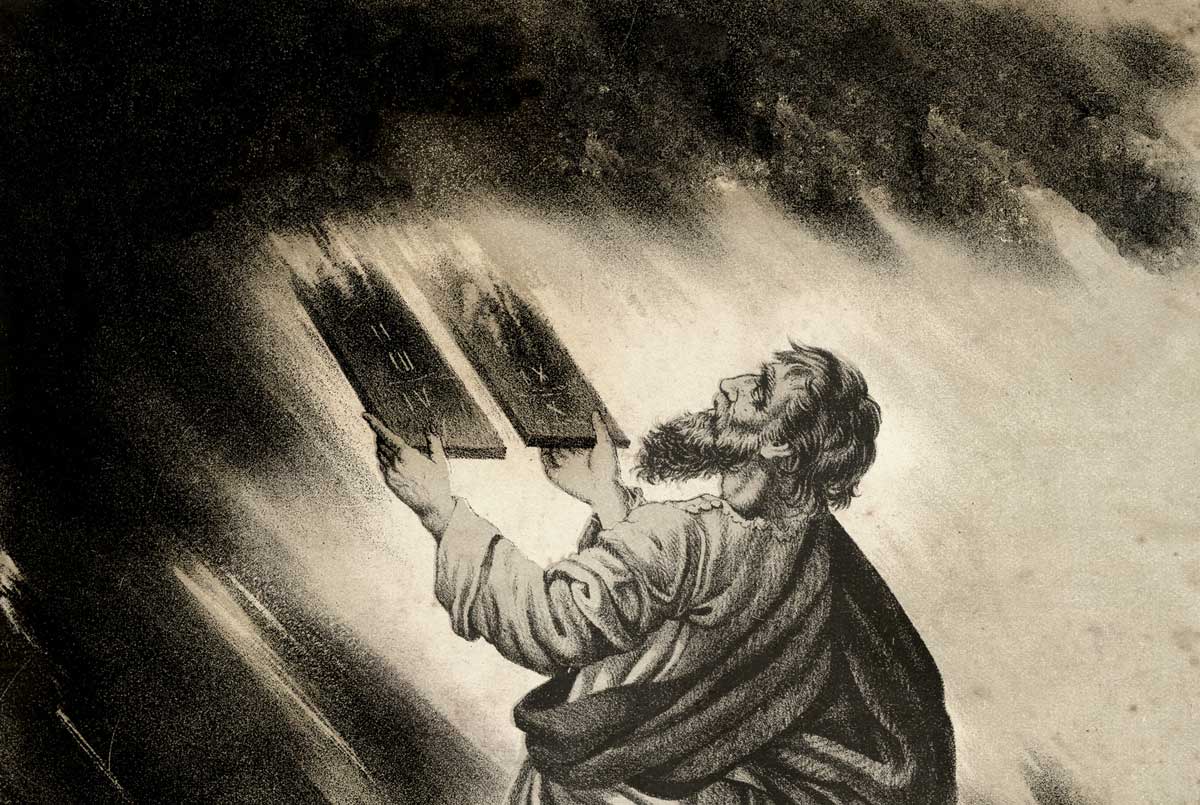 Lest Ye Forget The Covenant by Mark R. Elliott

Lest Ye Forget The Covenant

Mark R. Elliott asks, What Happened to the Ten Commandments?

What happened to the Ten Commandments?" asked my young grandson Valentino as we walked between buildings at our church one Sunday last year. He drew my attention to the bare spot in our church landscape where a heavy marker engraved with the Ten Commandments had rested for years. As I looked around, I saw that, indeed, Moses' moral code was missing, and I had no idea what could have happened to it.

Several Sundays later, our pastors confirmed from the pulpit that someone had dug up and spirited off our church's Ten Commandments. Many of us wondered what a thief would do with such heavyweight stolen property. One worshiper in a front pew speculated out loud, "sell it on e-Bay." But we were sensibly advised that the shipping cost for such a transaction would be prohibitive. Our pastors concluded with the suggestion that we pray that our thief would take to heart the eighth commandment, "Thou shalt not steal," and eventually return it.

Our missing Ten Commandments brought back a number of recollections associated with my professional life as a teacher of Russian and East European history. One such memory was of an address I heard in the early 1990s by General Nikolai Stolyarov. He was the Soviet Air Force pilot who flew Mikhail Gorbachev back to Moscow from the Crimea after the failed Communist hardliner coup in August 1991. Gorbachev soon assigned Stolyarov to a top post in the KGB, entrusting him with the impossible task of reforming the Kremlin's entrenched engine of state repression.

In Praying with the KGB (Multnomah Press, 1992), Philip Yancey recounts how a group of Western church and mission leaders met with General Stolyarov in his KGB office and managed to say a prayer with him. The general accepted an invitation to visit the United States, and when he reached Chicago, I was given the privilege of introducing him to an overflow audience at Wheaton College, where I was then teaching. Stolyarov would later become a believer, but in 1992, he, like millions of his countrymen, was searching for a new direction and a new moral compass. I will never forget his words that night: "My country has forgotten the Ten Commandments, and now we are paying the price for it."

Sadly, Russia is still, twenty years later, paying the price in the form of endemic corruption. In the 2012 edition of its "Corruption Perception Index," Transparency International (TI) ranked Russia 133rd out of 176 states. The index, which is based on worldwide survey findings, put Russia on a par with Honduras, Iran, and Kazakhstan.

In 1993, two scholars, Samuel Kliger and Paul DeVries, published a study on the post-Soviet population's understanding of the Ten Commandments. After conducting over a thousand telephone and face-to-face interviews and focus-group discussions in the Moscow region, they reached a conclusion similar to General Stolyarov's, writing, "The savage struggle against religion and any religious ideas, ideals, and spirituality has led to an almost complete elimination in people's consciousness of any frame of moral reference."

Gorbachev's glasnost, allowing for greater self-expression, permitted wrenching lamentations over the Soviet Union's moral freefall. A short story by Viktor Astafyev in the May 1986 issue of the Moscow literary journal Our Contemporary, treated in very candid language this theme of abandoned morals:

What happened to us? Who hurled us into the depths of evil and misfortune, and why? Who extinguished the light of goodness in our soul? Who blew out the lamp of our conscience, toppled it into a dark, deep pit in which we are groping, trying to find the bottom? . . . [In the past] we lived with a light in our soul . . . so that we would not wander in the darkness, . . . scratch out each other's eyes, or break our neighbor's bones. . . . They stole it from us and did not give anything in return, giving rise to unbelief, an all-encompassing unbelief. . . . To whom should we pray? From whom should we ask for forgiveness?

The survey work of Kliger and DeVries on the Ten Commandments documents this atrophied morality of late-Soviet society. While 96.1 percent of their telephone respondents stated that a prohibition against stealing "always" or "usually" applied, when they were asked about specific situations, they showed a much greater tolerance for theft. For example, only 48.5 percent considered it immoral to have "had a dinner at a restaurant and left without paying the bill," and only 12–13 percent considered it immoral to evade apartment rental payments or bus fares.

In the early 1990s, I was overseeing a grant project dealing with the need for a moral foundation for a market economy in Russia. Papers from two conferences held in Moscow and Chicago were published in 1992 in a Russian-English diglot entitled Ethics in the Russian Marketplace. The next year, imagine my consternation at the theft of 80 copies of this business ethics anthology from Moscow's Sheremetyevo Airport—and later seeing one of the copies for sale on the streets of the capital.

But do we in the West have any reason to gloat in a posture of ethical superiority? On this point, the comparisons Kliger and DeVries were able to draw between Moscow and New York City teenagers (based on focus groups of 15- and 16-year-old high-school students in each location) are both fascinating and troubling. "Neither the American nor the Russian teenagers reacted enthusiastically to the idea of a world without theft," they discovered. New York teens, for example, argued that "a world without theft would be a world without competition," the result being that "society should endure some degree of theft, for strong acquisitiveness is necessary for a vital economy."

Kliger and DeVries concluded that Russian and American societies were "both quite removed from the ideals of the biblical commandments" and that "the values vacuum . . . may become an increasing challenge in the former Soviet Union—and in the United States as well." The Enron scandal, the massive thefts of Bernie Madoff, the greed and moral compromises of many bankers and other financiers—and my church's missing Ten Commandments—all suggest that the United States suffers from some degree of the same abandoned morals as the former Soviet Union.

Still, from anecdotal evidence and my personal experience, it seems that ordinary, daily transactions in the United States are far less likely to involve pressure to give bribes (a form of theft) than is the case in Russia. TI's "Corruption Perception Index" bolsters this view, ranking the United States the 19th least corrupt out of 176 countries, compared to Russia's position at 133rd.

Nevertheless, one can argue that ill winds bedevil the moral climate of both nations. In each case, the ethical malaise may be likened to cut flowers, still blooming to greater or lesser degrees, but shorn of rooted sustenance, certain to be short-lived—absent a new grounding in wholesale repentance.