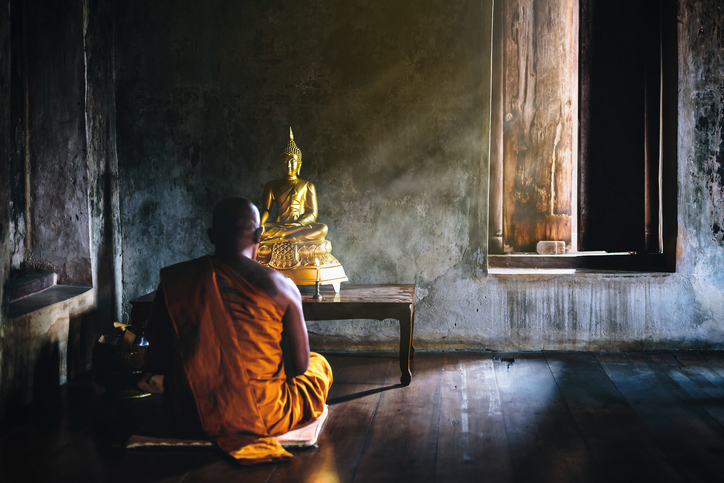 The Door to Paradise by Franklin Freeman

The Door to Paradise

Buddhism is not an American, or even a Western, religion—some would say it is not a religion at all, rather a science of the mind—but it has nonetheless attracted American celebrity converts who are considered household names: Steve Jobs, Steven Segal, Oliver Stone, Sharon Stone, Tina Turner, and of course, the first celebrity convert, Richard Gere. And these are only a few.

It has also attracted people not as well known but perhaps of a deeper fiber, such as the Greek (though English-born) writer and musician Marco Pallis, and the American writers Peter Matthiessen, Robert Pirsig, and Charles R. Johnson, who are practicing Buddhists. It has also fascinated Christian monks such as Dom Aelred Graham and Thomas Merton.

Now, I am a Catholic Christian, a convert, but for a while I too was drawn to Buddhism. I was going to Mass on Sundays and sometimes praying, but I was also sometimes meditating Zen-fashion, and I felt spiritually schizophrenic. My daily life seemed to be more in tune with the tenets of Buddhism, but when I went to Mass and heard the Scriptures read and received Communion, I knew that these were things I didn't want to give up. A Zen priest had told me you could practice Zen without being a Buddhist, but I would not expect a Catholic priest to say you could practice Catholicism without being a Christian.

Now, after a lot of thought, reading, and prayer, I have settled into being a Christian, of the traditional orthodox sort. But I have learned a lot from my study of Buddhism and from contrasting it with Christianity. This essay is the fruit of that fascination.

The sun glints through the pines, and the heart is pierced in a moment of beauty and strange pain, like a memory of paradise.

After that day, at the bottom of each breath, there is a hollow place that is filled with longing. We become seekers without knowing that we seek, and at first, we long for something "greater" than ourselves, something apart and far away. It is not a return to childhood, for childhood is not a truly enlightened state. Yet to seek one's own true nature is, as one Zen master has said, "a way to lead you to your long-lost home."

C. S. Lewis described the same experience in an essay titled "The Weight of Glory," only he called it "the inconsolable secret":

These things—the beauty, the memory of our own past—are good images of what we really desire; but if they are mistaken for the thing itself they turn into dumb idols, breaking the hearts of their worshippers. For they are not the thing itself; they are only the scent of a flower we have not found, the echo of a tune we have not heard, news from a country we have never yet visited. . . .

Franklin Freeman is a freelance writer living in Saco, Maine, with his wife and four children.