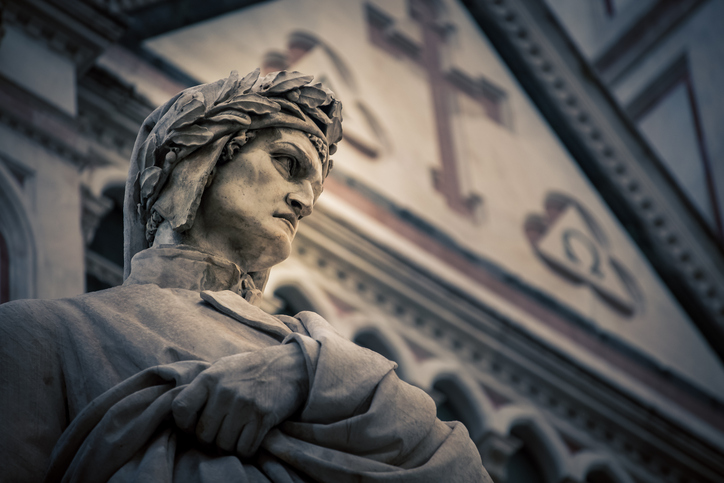 Contemporary horror films have nothing on Dante. His Inferno is full of terrors that even the most jaded film-maker would shrink from putting on screen: Nightmarish landscapes flowing with streams of boiling blood, deserts of burning sand showered by fire from Heaven, pits and rivers of black pitch, excrement, and muck, a lake eternally frozen that holds Satan, eternally munching on his victims. Noxious smells and putrid fogs fill the air, and as Dante descends toward the center of the earth, light is swallowed in utter blackness.

And this landscape is teeming with people shrieking in despair and pain, so many that Dante says in amazement, “I wondered/ how death could have undone so great a number” (Inferno 3.56–57). The punishments are terrible: Some are upside down in pits, others are enclosed in flames; some have had their heads twisted so that they face backward as they walk, others are tormented by sadistic demons; some are split from chin to belly, their guts and organs hanging between their legs, and others are chased by ferocious dogs that tear off pieces of flesh; some are transformed into serpents again and again, while others are plagued by disease.

Punishments in Hell are often inflicted by other human beings. The place is full of petty squabbles, foolish arguments, infantile fistfights, hair-pulling, head-butting. Near the bottom of the pit of Hell, Dante comes upon Ugolino, who plotted with Archbishop Ruggieri to take over the government of Pisa. When the archbishop turned against him, Ugolino was imprisoned in a tower with his sons and grandsons and left to starve. He watched as his children died “one by one.”

Dante leaves the final act unspoken, but he says enough: “by then gone blind, groped over their dead bodies./ Though they were dead, two days I called their names./ Then hunger proved more powerful than grief ” (Inferno 32.73–76). When Dante finds the count in Hell, he is frozen together with the archbishop and is gnawing on the archbishop’s head:

As a man with hungry teeth tears into bread,
the soul with capping head had sunk his teeth
into the other’s neck, just beneath the skull.

Tydeus in his fury did not gnaw
the head of Menalippus with more relish
than this one chewed that head of meat and bones. (Inferno 32.127–132)

Before he can speak to Dante, Ugolino “first wiped off his messy lips/ in the hair remaining on the chewed-up skull” (Inferno 33.1–3).

By comparison with Dante, Stephen King is as tame as A. A. Milne.

Though Dante rivals and surpasses modern horror, his vision of the world of the damned is set in an explicitly Christian context. The violence and terror are not gratuitous or titillating. They are shown because they teach us about God, the God whom Dante confesses as Eternal Love. As he approaches the gate of Hell, Dante reads the famous inscription: