Allen H. Roberts II on the Wisdom of the Good Doctor Edmund Pellegrino

—Thomas More, in A Man for All Seasons by Robert Bolt

When I joined the faculty at Georgetown University Medical Center nearly two decades ago, the principles and practice of medicine seemed to me to be in substantial continuity and accord, both technically and ethically, with the same of my father's era. Dad had been a general practitioner of the old school who, unaffected by the future blessings and curses of the Electronic Medical Record and of much regulatory oversight, was able to sit with his patients in his office, at the hospital, or in their homes, to look them in the eye, and to engage them with state-of-the art science and deep compassion.

He practiced during a unique time in our culture of medicine, when the "paternalistic physician" ethos of old was being tempered by and learning to walk—laudably—in step with the rising acknowledgement of patients' autonomous rights of self-determination. In contemporary ethics parlance, the beneficence of the physician was in balance with the autonomy of the patient. I believe, without a shred of impartiality, that my father struck precisely the right chord in his every patient-encounter. For his patients, he was, in art and science, a shepherding partner.

And in his day, the notion that any physician would intentionally end his patient's life was unthinkable.

But his was a fleeting period in medicine, it turns out, and my assessment of it fraught with docetic error; the profession of medicine, and the public's expectations of it, had been on the move for some time. Behind the scenes, it was instead an epoch of tectonic ethical shift. The same generation of medicine and society that had jailed Jack Kevorkian for second-degree murder (charges stemming from his assisting a terminally ill patient to take his own life) was now rising up to call him blessed. Science as the authoritative arbiter of normal and abnormal was dispatched, when convenient, by personal preference.

With "medical aid in dying" (aptly abbreviated MAID, as in "hand-maid"), medicine and society had thus come full circle. Once we had presumed to determine the moment when life and personhood begin, it was a small matter, and of the same cloth, to determine the hour when we would mediate death. Indeed, physician-assisted suicide is now paradigmatic of the confluence of recent societal trends and is itself the inevitable result (if not, some might opine, the very telos) of those trends.

My dad's day, or such as I perceived it to be, had come and gone.

Ah, autonomy! We are living the secular beatific vision wherein an individual's autonomy is ascendant, glorious, and sovereign over a physician's or health system's beneficence, and is oblivious or indifferent to its own entropic effect on society. The ethical constraints and proscriptions of traditional Hippocratic medicine, their very authority, and the moral agency of physicians and of the profession are dismissed as irrelevant, paternalistic (and, one anticipates, supremacist) metanarrative. And our profession has been complicit. The visit to the doctor is now less relational, more fiscal and trade-utilitarian. There is a waning expectation by patients that they need shepherding and a fading desire by doctors to shepherd.

Our hand is being called: does there exist, finally, a binding philosophic North Star for the profession of medicine? Is there a moral agency of the profession that is now somehow voided by contemporary trends? Ethicist Arthur Caplan has opined that there is nothing that qualifies meaningfully as a "philosophy of medicine"; philosopher Kevin Wildes asserts that a philosophy exists but is socially constructed. 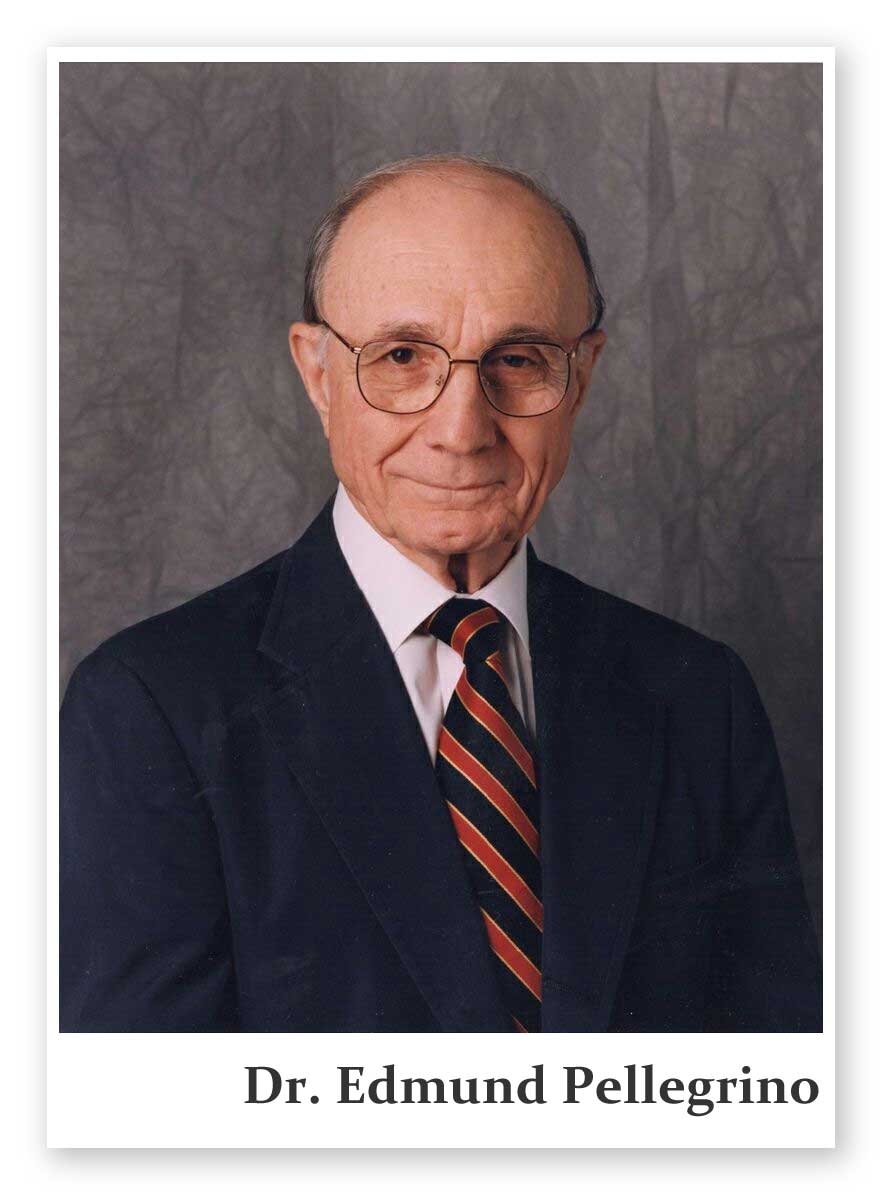 When I arrived at Georgetown, however, I met Dr. Edmund Pellegrino, who, then well into his eighties, was still in medical practice and ethics consultation.

A native of Newark, New Jersey, Dr. Pellegrino was raised and educated in New York City, with deep Catholic roots. He attended Xavier High School, St. John's University, Queens, and New York University. Physician, philosopher, bioethicist, academic—Jesuit to the core—he published 605 articles and chapters and 24 books on medical science, philosophy, and medical ethics, remaining active in all disciplines into the final months of his life (he died at 93 in 2013). Over his professional career, he held the position of President at the Catholic University of America, and at Georgetown he was Director of the Kennedy Institute of Ethics, John Carroll Professor of Medicine and Medical Ethics, founder of the Center for Clinical Bioethics (now the Pellegrino Center), and founder of the Center for the Advanced Study of Ethics. He was a Master of the American College of Physicians, a Fellow of the Hastings Center, Chair of the President's Council on Bioethics, and Senior Fellow of the Center for Bioethics and Human Dignity.

Physician-ethicist H. Tristram Engelhardt stated that Pellegrino led the "search for orientation in the face of post-modernity's cacophony and the constant presence of the moral concerns integral to the physician-patient relationship," and thus "shaped the development of the philosophy of medicine, the medical humanities, and medical ethics." Indeed, Pellegrino has been dubbed "the father of modern medical ethics." We at Georgetown will celebrate his centenary year in 2020.

Regarding the ethical trajectory of medicine and society in general, and the paradigmatic dispensing of death by doctors in particular, Edmund Pellegrino had much to say. From his massive scholarship, I distill three of his most significant contributions: his philosophy of medicine, the internal morality of medicine, and his understanding of autonomy.

medicine exists because being ill and being healed are universal human experiences, not because society has created medicine as a practice. Rather than a social construct, the nature of medicine, its internal goods and virtues, are defined by the ends of medicine, and therefore, [are] ontologically internal from the outset.

Medicine has as its starting point "the clinical, face-to-face encounter" of the patient with the physician, which, he says, is

the activity that defines physicians qua physicians, and sets them apart from other persons who may have medical knowledge but do not use it specifically in clinical encounters with individual patients. Clinical medicine is the locus ethicus whose end is a right and good healing action and decision. Moreover, clinical medicine is the final pathway through which public policies ultimately come to affect the lives of sick persons. Finally, no matter how broad or socially oriented we may make medicine, illness remains a human experience, and its impact on individual human persons remains why medicine and physicians exist in the first place.

Medicine, Pellegrino taught, is possessed of an internal morality which is likewise ontological and inherent, not defined or validated by physicians or by the profession; the authority of this internal morality is independent of whether physicians accept it. "[This] authority," he taught, "arises from an objective order of morality that transcends the self-defined goals of a profession." The telos of medicine, and hence its internal morality, are not subject to constraints of time, religion, social constructs, or the preferences or whims of an autonomous individual.

To be sure, Pellegrino was the champion of patient autonomy. But he taught that individual autonomy, properly understood, is necessarily bounded by community, and subject to the objective order of morality. In that context, the inherent beneficence of medicine is the protector of both the individual and the community. The most vulnerable of the community—the aged, the infirm, the disabled—the least of these—are susceptible to coercion as the "right" to die becomes the subtly implanted "duty" to die, and that which is "voluntary" today may become the legislated "standard of care" tomorrow. Autonomy, he says, is a matter of stewardship:

[In] medical ethics . . . autonomy, freedom, and the supremacy of private judgment have become moral absolutes. On this view, human freedom extends to absolute mastery over one's life, a mastery which extends to being killed or assisted in suicide so long as these are voluntary acts . . . this is a distorted sense of freedom that denies life as a gift of God over which we have been given stewardship as with other good things.

Medicine, then, is an inviolably beneficent enterprise, a scholarly, skilled, and gentle presence that is, in type and in fact, Christ's healing presence in all the world. The beneficent "right and good healing action" of medicine comes alongside the deeply afflicted, mitigates their suffering, affirms their absolute sacredness in the thick darkness of true compassion—but finally does not send them prematurely and with a glib sense of death into the arms of the Last Enemy.

In Pellegrino's mind, medicine, for the good of society, must remain indifferent to society's coronation of the autonomous self in the latter's acts of self-destruction. It must reject and resist physician-assisted suicide and all other manifestations of the primeval idolatry of self-interest, by which Adam himself paradoxically introduced into the created order the universal human experiences of sickness and death. Thus, at the locus ethicus, the clinical encounter, what we administer to our patients, for life or for death, we administer to
society.

Lamentably, there has arisen a generation that knows not Edmund Pellegrino. The hour is upon us wherein we need to embrace this wise physician, not only in the medical profession, but also in seminaries, at the podium, and in the pulpit. He will be our own shepherding partner as we seek to understand our profession's identity and purpose in the flux of culture.

My dad's day, it turns out, far from having vanished, is instead a permanent reality, woven, as it always has been, into the redemptive fabric of creation. Our profession needs to reclaim the day.

more on medicine from the online archives