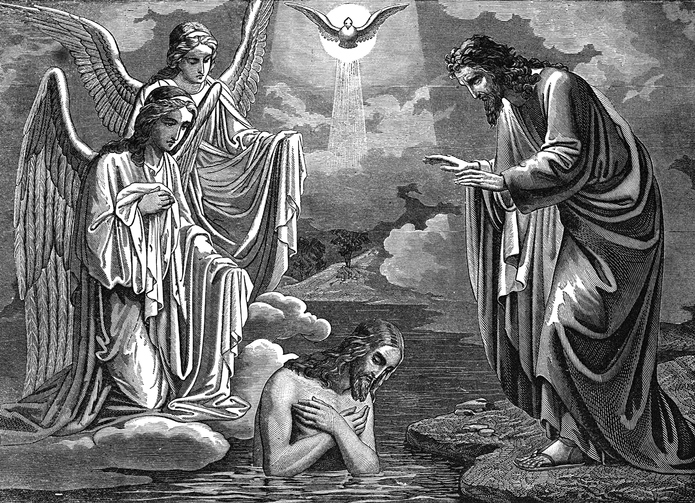 Water means danger and death. At least in the Bible it does. Water in the Scriptures is often a thing of great peril, even an enemy of God. It is the deep, the sea, the raging storm, the waves that imperil the ordered creation. The Psalmist says that the floods lift up as in rebellion. They lift up their voice and their roaring (Ps. 93:3). The seas must be rebuked by the Lord's mighty word. Only he can shut in the sea (Job 38:8). He must keep the sea in its limits. The seas and the deep have great power and fury.

On Natural Disasters as Ministers of God
by Barton Swaim

Sacraments, Martyrdom & the Sons of Zebedee

Two Gospel Texts in the Tradition
by Patrick Henry Reardon

This rage threatens to overcome God's people. The deep is filled with chaos and disorder. Water can stand for death itself. Psalm 18 pictures the terrors of the grave as a great, overwhelming flood: "The cords of death encompassed me; the torrents of destruction assailed me; the cords of Sheol entangled me; the snares of death confronted me" (18:4–5). In Psalm 69, David cries out "Save me, O God! For the waters have come up to my neck. I sink in deep mire, where there is no foothold; I have come into deep waters, and the flood sweeps over me" (69:1–2). But for the Lord, "the flood would have swept us away, the torrent would have gone over us" (Ps. 124:4). The Psalmist begs for rescue "from the many waters" (Psalm 144:7).

Water is also an instrument of punishment and wrath in the hand of God. The great flood of Genesis is the prime example of God using water as an instrument of his anger. Later, the rebellious and grumbling Israelites went down into the midst of the terrifying Red Sea, which was held in check only by God's powerful mercy. The Lord gains victory by using the death-dealing waters of the Red Sea to judge and destroy the Egyptians.

A Fight Through the Depths

To be baptized is to be plunged into all this chaos, disorder, wrath, danger, and death. In other words, baptism is dangerous and deadly water. Yet we do not often think of it that way. What could be ominous about a sweet little baby, a few drops of water, and shiny-white new clothing? But when we look at baptism in terms of the larger scriptural picture of water and the Word and God at work, it begins to stand out as a much more serious matter. To be baptized is to be plunged into the water in accordance with God's command. But being plunged into the water, or as the Psalms might put it, to be cast into the raging deep, is not a gentle or serene affair.

When John the Baptist called people to repentance and confession of sins, he called them to go down into the water. To go down into the water is itself a confession of sins, an act of accepting the verdict for sins. It is to surrender to the flood, to allow oneself to be deluged and judged. To be baptized is to say with the Psalms that the deep waters and the pit and the mire are sweeping over us, that we ourselves have a spot under the wrathful waters of the flood, that our lives are instruments of chaos and disorder. It is to say that we are orphaned under the waves.

Thus, in the biblical way of seeing things, baptism is not a nice warm bath that easily washes away our sins. It is more a life-and-death battle with the deep, with real and persistent evil and the satanic forces that rule our hearts.

Water brings death. To be under the water is to die, to drown, and it is an ugly death—a thrashing, painful, grasping struggle as one sinks to the bottom. That is a part of the biblical portrait of baptism: to die in the water. Romans 6 says we are baptized into the death of Christ.

Jonah is thrown into the water and is saved, but he must first face death. He must face the darkness of the eternal depths before the great fish that swallowed him spits him back into life. Noah's ark was cast upon the seas of death, and Noah was closed in and waited for the Lord to remember him. It is from the watery depths of certain death that the Psalmist cries out for mercy. The Israelites walk through the same valley of the shadow of death as the Egyptians. We are baptized, says St. Paul, into the death of Christ, buried with him (Rom. 6:3–4).

Paul Gregory Alms (paulgregoryalms.blogspot.com) is pastor of Redeemer Lutheran Church (LCMS) in Catawba, North Carolina. He is a graduate of Concordia Theological Seminary in Fort Wayne, Indiana, with both MDiv and STM degrees. He has written extensively for journals such as First Things, Concordia Theological Journal, Lutheran Witness, Lutheran Forum, The Cresset, and others. He is married and the father of four girls.