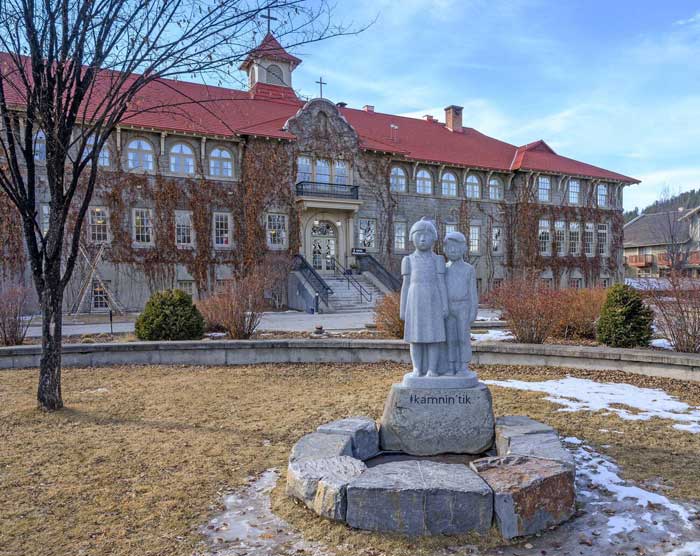 Fanning the Flames by Rory Leishman

The Sources of Canadian Anti-Christian Rage
by Rory Leishman

Since the announcement on May 27, 2021, that a researcher using ground-penetrating radar had discovered an estimated 251 unmarked graves on the grounds of a former Indian Residential School near Kamloops, British Columbia, seven churches in Canada, all but one of them on First Nations lands, have been burned down in suspicious fires. Enraged vandals are also believed to have set fire to at least twelve other Canadian churches and to have desecrated dozens more with red and orange paint.

Who is responsible for this unprecedented outburst of anti-Christian rage in a country hitherto renowned for its commitment to peace, order, and good government? Canadian Prime Minister Justin Trudeau pins much of the blame on the Catholic and Protestant agencies that ran the Indian Residential Schools (IRS) on behalf of the Canadian government between 1883 and 1996. In a statement on July 2, Trudeau said that vandalism and arson could not be justified, but "I understand the anger that's out there against the federal government, against institutions like the Catholic Church. It is real and it's fully understandable, given the shameful history that we are all becoming more and more aware of."

Is he right? Are Canadians becoming more aware of the history of the Indian Residential Schools that were variously run by Catholic and Protestant churches across Canada for over a century? Sadly, they are not. And that is largely because, for the past two decades, progressive politicians like Trudeau and his counterparts in the mass media have misled Canadians with false accounts of murder and mayhem in the IRS system.

On June 24, for example, the Canadian Broadcasting Corporation (CBC) began its morning newscast World Report with a frenzied accusation: "What happened? What led to those children being murdered? And let's be blunt about it: They were murdered." CBC producer Blake Prendergast then explained that the person making this shocking accusation was Wayne Semaganis, Chief of Little Pine First Nation in Saskatchewan, and that he was reacting to news about the discovery of about 750 unmarked graves in a cemetery at the site of the former Marieval Indian Residential School, operated by the Catholic Church on the Cowessess Reserve in Saskatchewan. Prendergast added, "After almost one hundred years of operation, the building has been torn down, but the horrors of what happened there have not been forgotten."

On August 10, the CBC followed up with a similar segment in its evening broadcast, The World at Six, this time featuring RoseAnne Archibald, National Chief of the Assembly of First Nations. She told the CBC, "For decades, we were not believed. Our survivors were not believed." She then said, "Make no mistake: We are seeing evidence of genocide." CBC reporter Raffi Boudjikian observed that the Canadian government had to that point "sidestepped" using the word "genocide."

On June 23, the Toronto Globe & Mail broadcast some equally extreme allegations against Christian IRS care-givers by Bobby Cameron, Chief of the Federation of Sovereign Indigenous Nations in Saskatchewan. "We will do a search of every Indian Residential School site and we won't stop there," Cameron avowed.

We will also search all of the sanatoriums, Indian hospitals and all the sites where people were taken and abused, tortured, neglected and murdered. We will tell the stories of our children, of our people who died. Who were killed by the state, by the churches, and we won't stop until we locate all of them. The world is watching as we unearth the findings of genocide.

Other mainstream newspapers and broadcasters in Canada made similar allegations against Christian teachers and supervisors in the IRS system. Yet all of these dreadful allegations have gone entirely uncorroborated.

Failures of the Truth & Reconciliation Commission

Rory Leishman is a former lecturer in political science at the University of Western Ontario and national affairs columnist for the London Free Press. Now a freelancer, he writes a regular column for the Interim: Canada's Life and Family Newspaper.